A Mayor at 19, Marcus Molinaro now seeking to become New York Governor at 43 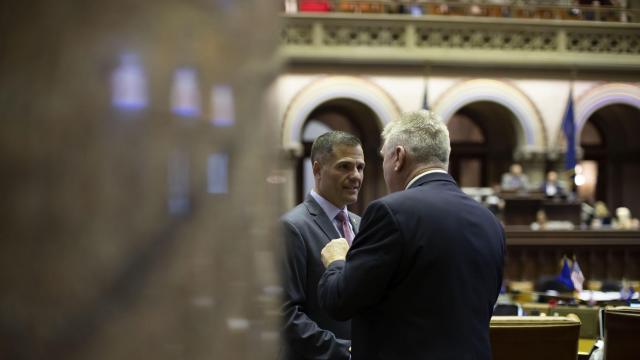 TIVOLI, N.Y. — For the sake of historical perspective, let the record show that Marcus J. Molinaro did not initially want to run for governor.

It was early January, and Molinaro, the Dutchess County executive, had emerged as a favorite among some Republican leaders in New York to challenge Gov. Andrew M. Cuomo, the two-term Democrat with a gargantuan campaign war chest and millions of energized Democratic voters in a solid blue state.

Molinaro made it clear that he did not have the appetite for the uphill battle. But after some serious backslapping by the state’s Republican establishment, and what he said were pleas from constituents, Molinaro decided to disregard his apprehension and take on Cuomo.

A narrow path to victory seemed possible. Cuomo could be vulnerable on issues like the spotty upstate economy, New York City’s decrepit subway system, and corruption. And Molinaro was considered a potentially potent foe: young, energetic and accomplished, having once been elected the youngest mayor in the country in Tivoli, the Hudson Valley village where he came of age.

However, it has not exactly worked out.

Just days before the election, Molinaro finds himself unable to narrow a yawning deficit in the polls, and struggling to raise money and awareness of his candidacy. He is stumping, but often for seemingly meager rewards, sometimes drawing little more than curiosity seekers to campaign events.

He has been placed in the position of practically clamoring for the governor’s attention, challenging him to multiple debates and serious policy discussions, mostly unheeded invitations. (Last week’s contentious debate was more Hatfield-McCoy than Lincoln-Douglas.)

Yet for all of that, Molinaro, a boyish 43-year-old with a wisp of gray at the temples, insists he is still eager for the fight.

“I want to win,” he said during a recent stop in Rochester. “I want to change the dialogue, change policy and win.”

Molinaro is quick to laugh — a big, sometimes nearly nervous guffaw — when describing his life. But when he speaks about Cuomo, he does so with a disdain that seems to be borne as much out of his feelings about the governor’s personality as his politics.

It is hard not to feel that some of this animus comes from a class difference in the upbringings of each man. In the Republican’s view, the race pits Cuomo, the well-to-do, big-city scion of a political dynasty, against Molinaro, the lower-class son of divorced parents who grew up in this small village where he was elected mayor at 19.

And to listen to Molinaro is to be constantly reminded of that disparity.

“I’ve always had that feeling that I’m on the outside. I just have,” he said. “I know a lot of people who feel that way. But when I’m in a room with exceptionally wealthy people, I feel like I’m the poor kid.”

His family’s financial struggles are one of two events that appear to define Molinaro’s personal and campaign narratives. In some ways, his political philosophy seems to stem from an instance when he was a child: His mother was forced to use food stamps and was confronted by a disrespectful clerk at the Dutchess County Department of Community and Family Services, an agency he now controls.

“She must have had a bad day and made my mother feel small, and made her feel so worthless,” Molinaro recalled. “I don’t blame that woman, but I saw at that moment what a person with a degree of power could have. So entering into elective office, my goal was to empower people to do for themselves and government to be active, to be engaged but not to be intrusive.”

The second driving force is his daughter, Abigail, who is autistic and suffers from seizures. Since announcing his campaign in April, he has made inclusion and services for people with disabilties a central element of his pitch to voters.

He has also been outspoken on mental health issues.

This, too, seems informed by his biography. After the loss of a young child in 1970s, Molinaro’s mother suffered from depression. She and her husband divorced when Molinaro was in elementary school.

“I can remember as a kid the arguments,” he said. “I can still remember being in a bunk bed on the lower bunk, my brother on the upper bunk, and my parents arguing and my father leaving.”

His parents’ breakup caused Molinaro to “grow up very quickly,” he said, dealing with family business like the power and cable bills. His life settled after his mother remarried and moved to Tivoli, where Molinaro soon flourished as a precocious, if quiet, standout in government classes. Steve Sutton, his social studies teacher at Red Hook High School, said Molinaro restarted a student council while he was a teenager.

“We probably should have seen something coming at that point,” said Sutton, adding that he thought Molinaro’s goal “was about serving,” not governing. “I’m not trying to sound like a campaign ad. But he really wanted to make the school better.”

During high school, Molinaro took an internship with a Democratic assemblywoman, Eileen Hickey. Shortly thereafter, he had his first encounter with the Cuomo family, meeting then-Gov. Mario M. Cuomo in the state Capitol.

“He said he’d carve out three minutes, and three minutes became 15 minutes,” Molinaro recalled. “He talked to us, he asked us questions and he was kind.”

“There’s a national party and they have a perspective, and then there’s what we do at the local level,” he said. “I don’t want that to sound as dismissive. I just don’t see the world based on some broad label.”

He added that his job at a county level has more to do with delivering services than political dogma. “I haven’t met the harshness, I haven’t seen the anger where I serve,” he said.

Molinaro is trying to thread a very narrow political needle while offering a vision of Republicanism that seems more attuned to former President George W. Bush’s idea of “compassionate conservatism” than President Donald Trump’s more antagonistic and nationalistic approach. At the same time, however, Molinaro also appears aware that his slim chances of winning may be tied inextricably to whether Trump’s supporters turn out for him Nov. 6.

In a debate last week with Cuomo, for instance, Molinaro tried with mixed success to put distance between himself and the president — who is deeply unpopular in the state — while still seeming to approve of some of his policies when they help New York.

But Cuomo and his surrogates have pounded Molinaro with a campaign catchphrase, dubbing him as a “Trump mini-me,” and have described him as part of a “extreme conservative” movement posing ample social and financial threats to the state.

The Cuomo campaign has consistently painted Molinaro as anti-woman and anti-gay, noting the Republican Party’s stance on abortion and Molinaro’s votes in the Assembly against same-sex marriage. In the debate, however, Molinaro said that he believed that Roe v. Wade was “settled law,” and that he now accepted the rights of gay people to marry. He said he opposes the Safe Act, Cuomo’s 2013 gun control legislation, on the basis of civil liberties.

Molinaro’s other major proposals have included a 30 percent reduction in property taxes and an “Albany accountability act” to fight corruption. Two former top aides to Cuomo were convicted this year on federal corruption charges. Then there is the question of money. In political terms, Molinaro is once again living near the poverty line: His latest campaign filing showed him with some $311,000 left to spend, a pittance in a state where the bulk of the votes are in New York City, where advertisements are expensive to buy.

Molinaro admitted he does not have a passion for fundraising, calling it “unseemly.”

“I’m not sure why we spend so much time celebrating the fact that a human being can raise $101 million,” Molinaro said, referring to Cuomo’s reported haul during his three campaigns for governor. “It almost becomes a need to outraise the next guy in order to seem successful. I think that is a disgusting statement in American politics.”

His long odds notwithstanding, Molinaro has a résumé studded with surprising electoral victories, including a 2006 primary win over an incumbent assemblyman, Patrick Manning, that gave him a four-year stint in Albany’s lower chamber.

“He toed the party line, but did I feel he was a zealot? No,” said O’Donnell, who is openly gay. “The ones that really hate gay marriage, they don’t ask about your husband every time.”

In 2011, Molinaro successfully ran for Dutchess County executive, and he was easily re-elected in 2015. Neither victory gathered the attention or curiosity of his election as the teenage mayor of Tivoli, which led to appearances on the “Today” show and the “Phil Donahue Show.”

Molinaro has recounted the story of that election dozens of times — “I tell the joke, I ran home and asked my mom if it would be OK if I ran for mayor” — and he still lives near Tivoli.

His first marriage ended in divorce in 2014, and he remarried a year later to Corinne Adams, whose employment at an architecture firm that received business and subsidies from the county led to accusations of pay-to-play by the Cuomo campaign. Molinaro angrily denied this, calling Cuomo a “classless buffoon” for bringing his wife — due with the couple’s second child in late November — into the race.

It was not the first time Molinaro had thrown punches. He also memorably compared the governor to “the sheriff of Nottingham”and a “deranged Wizard of Oz,” and during last week’s debate he chided Cuomo for being “born on third base.”

For all of that invective, Molinaro said he remains proud of the race he has run, describing it as a chance for someone from his world to engage with what he called “the power and grandeur and romance” that political world can sometimes contain.

“Listen, there’s only one time that a poor kid gets to run for governor in the state of New York,” Molinaro said. “How many times does a guy like me get an opportunity to do this?”