A Look Inside the Tactics of Definers, Facebook’s Attack Dog 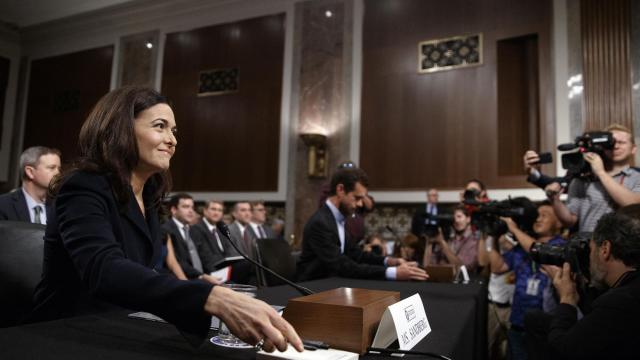 SAN FRANCISCO — A small firm called Definers Public Affairs brought the dark arts of Washington’s backroom politics to Silicon Valley when, while working for Facebook, it began disparaging other tech companies to reporters.

But a few days before Sheryl Sandberg, Facebook’s chief operating officer, testified to Congress in September, Definers set its sights on a different target: the senators about to question Sandberg.

In one document circulated to reporters, Definers tallied what software the 15 members of the Senate Intelligence Committee used to track visitors to their Senate websites. Another document detailed how much each senator spent on Facebook ads and how much they had received in campaign donations from Facebook or other big tech companies.

Known in the political business as opposition research, the documents pushed out by Definers neatly provided reporters with the ammunition they would need to suggest the senators grilling Sandberg were hypocrites for criticizing Facebook.

While senators are no strangers to opposition research — they use it all the time against political rivals — they take a dimmer view when it used against them outside of election season. That is especially true when the research is being paid for and shoveled to reporters on behalf of a company that is saying it wants to work with lawmakers, not against them.

And companies facing scrutiny in Washington usually avoid doing anything that could antagonize lawmakers.

“At the same time that Facebook was publicly professing their desire to work with the committee to address these issues, they were paying a political opposition research firm to privately attempt to undermine that same committee’s credibility,” Sen. Mark Warner of Virginia, the top Democrat on the panel, said in a statement. “It’s very concerning.”

The documents obtained by The New York Times provide a deeper look at Definers’ tactics to discredit Facebook’s critics. The Times reported on Wednesday that Definers also distributed research documents to reporters that cast liberal donor George Soros as an unacknowledged force behind activists protesting Facebook, and helped publish articles criticizing Facebook’s rivals on what was designed to look like a typical conservative news site.

Late Wednesday, after The Times published its findings, Facebook cut ties with the firm.

“I understand that a lot of D.C.-type firms might do this kind of work. When I learned about it I decided that we don’t want to be doing it,” Mark Zuckerberg, Facebook’s chief executive, said on Thursday during a call with reporters.

Colin Reed, managing director of Definers, said in an email that his firm simply compiled public information and what Definers did was “standard operating procedure” for public affairs outfits. “It shouldn’t be surprising to reporters at The New York Times that a PR firm would be providing context for reporters ahead of a client’s testimony on Capitol Hill,” he wrote. Facebook initially hired Definers to monitor news about the social network. It expanded its relationship with the firm in October 2017 when scrutiny of Facebook was increasing over how Russian agents had used the site to sow discord before the 2016 U.S. election.

Definers began doing some general communications work, such as running conference calls for Facebook. It also undertook more covert efforts to spread the blame for the rise of the Russian disinformation, pointing fingers at other companies like Google.

A key part of Definers’ strategy was NTK Network, a website that appeared to be a run-of-the-mill news aggregator with a right-wing slant. In fact, many of NTK Network’s stories were written by employees at Definers and America Rising, a sister firm, to criticize rivals of their clients, according to one former employee not allowed to speak about it publicly. The three outfits share some staff and offices in Arlington, Virginia.

Before Sandberg’s Senate testimony, Facebook lobbyists pushed lawmakers to refrain from questioning her about privacy, censorship and other issues, and to stick to election interference. The committee’s chairman, Sen. Richard Burr, R-N.C., was swayed and warned members to stick to the hearing’s planned topic, The Times reported Wednesday. Facebook had also lobbied for the hearing to include a Google emissary of similar rank to Sandberg. Burr invited Larry Page, a Google co-founder, but he did not show up. Instead, Sandberg sat alongside an empty chair behind a placard for Google.

In an email days before the hearing, a Definers employee pressed a Times reporter to write that Facebook was taking the senators’ concerns seriously while Google was irresponsible for skipping the hearing.

The day before the hearing, NTK Network reported that Sen. Marco Rubio, R-Fla., had suggested that Google was possibly a monopoly. The next day, shortly after the hearing ended, NTK Network posted another story highlighting Rubio’s criticism of Google during the hearing.

Those pieces were just two of at least 11 negative items NTK has posted about Google since late March, including an article questioning why Zuckerberg needed to testify to Congress at another hearing earlier in the year but a Google executive did not.

Like the documents on the senators, Definers distributed other memos that sought to lay out evidence for angles that it wanted reporters to pursue. The memos were typically based on public information like press clippings and social media posts.

Definers urged reporters to explore the financial ties between Soros and Freedom From Facebook, a coalition of groups that had criticized the company. The idea was to persuade reporters that the coalition was not a sincere movement of like-minded groups but rather an orchestrated campaign by a rich, partisan opponent. A two-page document that Definers distributed about Freedom From Facebook noted that “at least four of the groups in the coalition receive funding or are aligned with George Soros, who has publicly criticized Facebook.” The four groups named in the document do appear to have received funding from Soros’ Open Society Foundations.

A second, 12-page document sought to link Freedom From Facebook to Soros and to David Brock, a Democratic operative who is widely portrayed in conservative circles as a master of political dirty tricks. While pushing the connection to Soros, the document highlighted that protesters from Freedom From Facebook held up signs with images reminiscent of old, anti-Semitic propaganda.

Definers said in a statement that the document was “entirely factual and based on public records.”

Eddie Vale, a Freedom From Facebook spokesman, said the coalition’s primary funder was the computer scientist David Magerman but he declined to disclose other funders. Vale said the coalition did not receive money from corporations. Open Society Foundations said it did not fund the coalition.

Laura Silber, a spokeswoman for Open Society Foundations, said the philanthropy’s president spoke with Sandberg on Thursday and requested that Facebook commission an independent review of the company’s relationship with Definers, with results made public within three months.

The recent work by Definers was not the first time Facebook has tried to smear its rivals. In 2011, Facebook hired the public-relations firm Burson-Marsteller to urge reporters to investigate Google for invading people’s privacy. The move backfired when reporters revealed the plan.