Inside the mind of Mitch McConnell 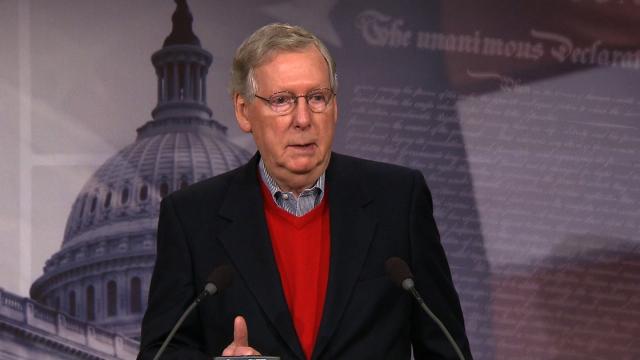 The fate of President Donald Trump's health care plan rests in the hands of Senate Majority Leader Mitch McConnell. The Kentucky Republican has said he wants a final vote on the Senate version of the American Health Care Act before Washington leaves for the July 4 recess. The challenges are clear; a half dozen Republican Senators have already said they can't support the legislation in its current form. McConnell can afford to lose only two. So, how can he hope to pull it off? For answers to that question, I reached out to Josh Holmes, a former McConnell chief of staff and campaign manager, who is now president of Cavalry, a Republican consulting firm. Holmes remains close to McConnell and brings a clear perspective -- strongly pro -- of the majority leader. Nonetheless, his insight into how McConnell goes about his legislative business in invaluable. Our conversation, conducted via email and lightly edited for flow, is below.

Holmes: McConnell doesn't advertise his strategy but I'll give you my best guess on what's driving the action. In every big effort I've ever been associated with, McConnell begins by absorbing 90% of the political pressure himself. He plots a pathway that shoulders almost all of the political danger and allows his members to work things through without suffocating from critics. You can already see how that's played out in this debate with the prolonged focus on McConnell and the condensed timeline for his members.

Second, one of McConnell's great gifts is his ability to listen to his members. The product is always a direct reflection of the views of his conference -- not his own dictation. He and his staff have clearly spent countless hours talking to Senators about what they need because the bill they've come up with appears to be the closest you can get to consensus without applying the closing arguments. What sits before his members is a bill that does not create the same kind of paralyzing political problems that previous efforts have produced. It also includes gigantic conservative victories that could very well constitute the most significant conservative reforms in generations.

Third, he frames the debate. His members know he would not be taking something up if it weren't vitally important but sometimes everyone needs to reset the dial on why they're about to make a tough decision. McConnell has an uncanny ability to lay out the wisdom behind an approach and the potential pitfalls with various directions. In this case, clearly his members understand the problem. The insurance markets are failing and in all likelihood, without a reform effort undertaken now by Republicans, Congress could very well be addressing this again in the fall with a package that looks a lot more like a bailout than repeal. Worse yet, Republicans could lose a couple elections and the conversation about repairing the insurance markets will undoubtedly mean shifting towards the liberal dream of single-payer. If that weren't enough, it is the only opportunity Republican senators will have to keep their promise with respect to Obamacare. The enormity of the pressure for senators to keep that promise will weigh heavily on most of the remaining holdouts and for others, the failing system should provide ample motivation.

Fourth, McConnell always keeps moving forward. He has a profound sense of peace when the pressure is most intense. The intensity usually wears on politicians and most inevitably make a mistake, a rash decision, or otherwise compromise their ability to get something done. McConnell never lets his emotions dictate the pace of play -- he sets a timeline and marches forward. In this debate, the decisions are difficult, they are not unknown. He understands that time does not improve difficult decisions, it only delays them. The prevailing view appears to be that a difficult decision at the end of June is better than a difficult one at the end of July, because the outcome -- whatever it is -- will in all likelihood be the same.

Five, he knows how to count votes. The world will find out where the votes are after they've been called but it won't be a mystery to the Senate Majority Leader.

Cillizza: You have, at least, six GOP Senators expressing concern about the legislation. How does McConnell handle the unique challenges posed by that six-headed monster?

Holmes: He inherently knows where he has room to maneuver and where he doesn't. He keeps a close watch on his fellow Senators and makes observances about what they need. With unanimous Democratic opposition to anything that touches Obamacare, the pathway is exceedingly narrow. In fact, if you had a Venn Diagram of the moderate and conservative concerns about health care reform the overlap may be invisible to the naked eye. McConnell will make find every inch of territory he has to make accommodations to ensure Senators are as comfortable as they can possibly be with the bill.

Cillizza: McConnell is widely regarded as master legislative strategist. What's the biggest legislative victory you can remember -- and how did he make it happen?

Holmes: Honestly, there isn't much of consequence that has moved in the last decade without his leadership. The campaign finance bills of the 1990s were certainly where he showed he was a cut above. The one that stands out to me was the Budget Control Act of 2011. The country was at the brink of default, negotiations between Speaker Boehner and President Obama had imploded, Harry Reid took to the Senate floor to pronounce everything dead, and credit agencies were downgrading America. Somehow through all of that, McConnell managed to negotiate the largest spending cut in generations with a Democratic Senate and Vice President Joe Biden a day before default.

Cillizza: What makes McConnell good at this -- character-wise? What are the traits that distinguish him from other senators?

Holmes: Mitch McConnell has hundreds of things that set him apart but here are 6 that are relevant to this week: 1. Focus. McConnell's ability to tune out the noise and stay concentrated is unprecedented. 2. He absolutely refuses to lose. It's that Michael Jordan-like intensity that just keeps him charging ahead when almost everyone else would throw up their hands. 3. He has humility. McConnell is motivated by accomplishment not who gets the credit. 4. He doesn't let mistakes cripple his progress. 5. He is loyal and possesses a long memory. That works both ways obviously. I always think you can always determine an effective leader by the loyalty of the people around them. I've never met a former staffer of Mitch McConnell's who doesn't love him. 6. He reads people better than anyone I've ever encountered and genuinely cares about their view. If you've got something productive to offer on a topic, he'll bring it out of you.

Cillizza: Finish this sentence: "The chances of the Senate passing a health care bill before July 4 is ________%." Now, explain.

Holmes: I don't do percentages well. I think they will get it done.