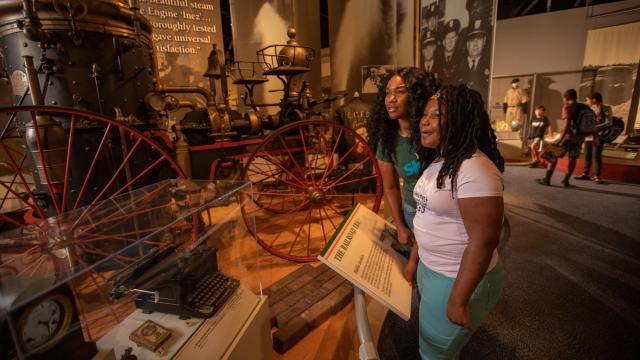 When it comes to visiting a new place, people usually turn to Google for recommendations of places to go, food to eat and things to do. While the Internet can certainly give you some insight, nothing beats the tips and suggestions from local residents who have firsthand knowledge of all of the best things to do and see.

Elizabeth City is located just off the coast and is known for its waterfront and quaint southern charm. But, it's also a place bursting with rich history, a foodie's delight and home to the annual North Carolina Potato Festival.

"Elizabeth City is great for all ages. There's something to do for everyone, whether it's a family with kids or a single person coming into town for a visit," said Rhonda Twiddy, an Elizabeth City resident who grew up in town, attended Elizabeth City State University and is now a local realtor.

Being located along the Albemarle Sound — an estuary where freshwater meets saltwater, makes Elizabeth City a fisher's paradise due to its brackish water. Anglers and nature enthusiasts alike revel in the diverse aquamarine wildlife, flora and fauna found in the city's waters.

"We actually live on the water so we can kayak, go boating, and fishing. It's just a really charming place to live," said resident and co-founder of We Out Here, Linea Johnson.

If you don't live on the water, but want to get out on it for a day, you can. Carol Terryberry, who runs Sail River City, takes people out on the water to kayak or sail almost daily.

"Elizabeth City is also really walkable, which is pretty amazing. We have more than 12 acres of parks on the waterfront that you can get out and enjoy," added Twiddy.

A crown jewel of Elizabeth City is Waterfront Park, an outdoor park that offers breathtaking views of the Pasquotank River. With boat ramps, a pavilion, boardwalk and pier, the park is often used to host events and can accommodate visitors who come by foot, car, or boat.

"It's open to everyone," said Johnson. "The Great Dismal Swamp is also close by and was actually part of the Underground Railroad."

Visitors can learn more about the history, legacy and impact of the Great Dismal Swamp at the Museum of the Albemarle that's right across the street from Waterfront Park. In fact, the history of Elizabeth City, particularly its black history, is rich and robust. Visitors can tour not only the Great Dismal Swamp, which was home to former slave and notable local, Moses Grandy, but also the campus of Elizabeth City State University. The public Historically Black College was first established in 1891 as a Normal School and carries a long legacy of educating generations of African Americans.

One of Twiddy's favorite pieces of history in town is the Elizabeth City Aviation Trail, a self-guided walking tour of places where the Wright brothers stayed and made friends in Elizabeth City that winds through the downtown area and along the river.

"I love the fact that we trace the history of the Wright brothers and aviation in our Coast Guard City," said Twiddy. 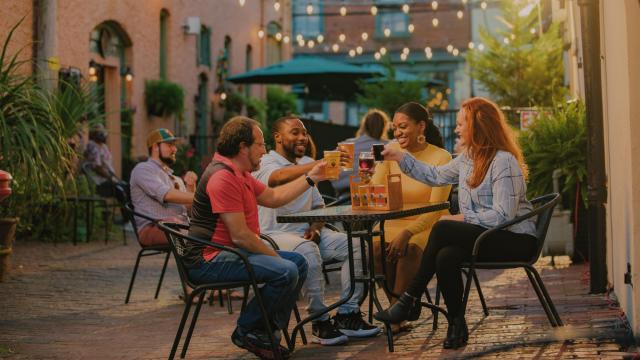 The waterfront also makes for a great backdrop and sets the ambience of a charming downtown that is buzzing with local eateries, unique restaurants and bars, and one-of-a-kind shops.

Johnson and her husband particularly like grabbing a drink at Ghost Harbor Brewing Company or having a night out in Pailin's Alley. Pailin's Alley is an alley of restaurants and businesses that features tables where you can sit and socialize amidst an ambience of string lights and oftentimes, music too.

Businessman William Pailin purchased the spot of land that is now Pailin's Alley in the 1800s and it eventually fell into abandonment before being revitalized in 2016 into the gathering spot that it is now.

"On any given weekend, Pailin's Alley comes alive with cozy lighting, friends enjoying a drink, the scent of delicious meals from nearby restaurants, live music or trivia, and all around good vibes," states VisitElizabethCity.com. "Locals and visitors have come to love Pailin's Alley in recent years as a central gathering area for Elizabeth City's downtown patrons."

"I am a foodie. I love good food and I love a good atmosphere at the same time," said Twiddy. "It's really nice to have places that you feel really comfortable where you know you're going to get a great culinary and social experience."

Elizabeth City also has seasonal events throughout the year. The Farmer's Market in the spring is a hit and events like Music on the Green at Mariners' Wharf Park is a summer favorite. The city is also the host of the annual North Carolina Potato Festival.

"It's a huge festival that we have with all the surrounding cities and a whole bunch of vendors, your typical Ferris wheels, food vendors, fun and games — and of course, all the potatoes you can possibly eat," said Johnson.

When it's not festival season, sometimes Johnson enjoys a relaxing weekend staycation in her own city and suggests visitors check out an Airbnb called Loft Gardens.

Added Twiddy, "I'm at least six generations deep from Pasquotank County. This is home and there's never been a reason to go away. Elizabeth City is perfect."