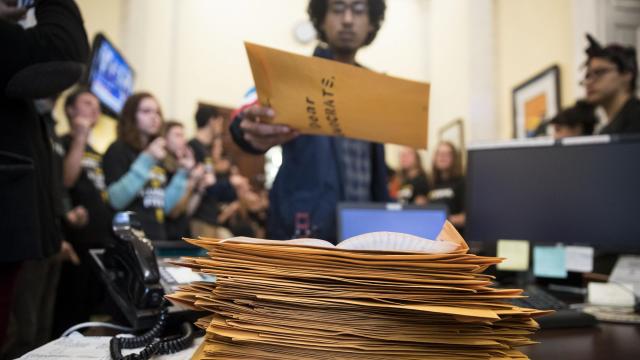 WASHINGTON — Freshman orientation for new members of Congress had barely begun when Alexandria Ocasio-Cortez, the 29-year-old darling of the progressive left and newly elected congresswoman from New York, visited Nancy Pelosi’s office for the first time. She was not there to meet the House Democratic leader.

She was there to protest.

“This is not about personality, this is not about rebuke, this is not about confrontation — it’s about making sure that we are getting the job done,” she declared, moments before she spoke to young activists who staged a sit-in to demand a Green New Deal to address climate change. Of Pelosi, she said, “I think she really appreciates civic engagement.”

Ocasio-Cortez’s noisy Washington debut, and her uncanny knack for grabbing the spotlight, underscores the difficulties that await Democratic leaders as they try to unify an unusually diverse incoming class. Newcomers in both parties descended on the capital Tuesday for the start of a biennial Washington rite — freshman orientation — that seems unusually freighted with seriousness in the age of President Donald Trump.

Going to Congress is typically like going to college. Newcomers make new friends, look for housing, pick up new cellphones (this year, they are also being issued iPads) and take pictures for their temporary ID badges, to be replaced by House pins once they are sworn in. They take nonpartisan seminars about the nuts and bolts of joining Congress — how to hire staff and set up an office. And they go to parties, lots of parties, which members of Congress prefer to call “receptions.”

But as Ocasio-Cortez’s participation in the protest made clear, these are not typical times in Washington. Members of the Class of 2018, especially the Democrats who are wrestling with how much to cooperate with Trump — as opposed to investigating him — say they feel an acute sense that the country is at a precarious moment.

“I feel a pretty heavy burden,” said Tom Malinowski, a human rights advocate, former State Department official and freshman Democrat from New Jersey. “We were the difference makers in this election, at a moment when it really does feel as if the most fundamental norms of our democracy are hanging in the balance.” Then there is the bitterness of Capitol Hill, not exactly a mirror of freshman-year jitters at college.

Deb Haaland, a newly elected Democrat from New Mexico who is one of the first Native American women to serve in Congress, bumped into a Republican freshman in an elevator at their hotel, and introduced herself. He said it was nice to meet her, then followed up: “I’m sure we’ll be at each others’ throats eventually.”

For many — even those with deep Washington experience — arriving in the capital is something of a culture shock. Elissa Slotkin, a Democratic first-time candidate and former CIA officer who worked in the administrations of George W. Bush and Barack Obama, is now a congresswoman-elect from Michigan, having narrowly defeated a Republican incumbent. After 18 months on the campaign trail at home, she is having to adjust to the topics that people in Washington discuss.

“Those of us that successfully flipped districts did so by focusing on very local issues and not on Washington stories,” she said. “So you come to Washington, and this place is like an echo chamber, and everybody’s just sort of bouncing off each other on Trump, Trump, Trump — and no one’s talking about the issues that really matter to people’s pocket books.” Tim Burchett, a newly elected Republican of Tennessee, was just trying to find his way around.

So far, there are 87 members of the new freshman class: 56 Democrats and 31 Republicans. The Democrats mostly represent a triumphant political wave; the Republicans mainly occupy the seats of a different kind of wave, retirees. An additional nine candidates — eight Democrats and one Republican — whose races are still hanging in the balance are also in town for orientation. They are cloistered at a heavily guarded hotel in southeast Washington.

The orientation, run by the House Committee on Administration, will last two weeks, with a weeklong Thanksgiving break in between. Rep. Zoe Lofgren, D-Calif., and the committee’s incoming chairwoman, said that in addition to the usual sessions on hiring and ethics rules, lawmakers will receive extensive training this year on how to prevent and respond to sexual harassment — a response to a string of scandals that prompted the House to change its rules last year.

Senior lawmakers who are eager to rise up the leadership ranks use orientation for another reason: to court and count votes.

Pelosi, who already made history as the first female speaker, now hopes to return to that job. On Tuesday, she courted hard during an event she hosted at Osteria Morini, an upscale Italian restaurant on Washington’s newly redeveloped waterfront. Behind its glass windows, she could be seen entertaining a mix of incoming and incumbent representatives, who chatted over drinks and hors d’oeuvres and posed for pictures with one another. The event, one of several Tuesday, was also an opportunity for other representatives to formally meet their new colleagues.

“Max, proud of you, bro,” Rep. Charlie Crist, D-Fla., yelled outside the restaurant as he spotted Max Rose, who pulled off an upset on Election Day on New York’s Staten Island. “Proud of you.”

“I couldn’t be more excited to see you,” Rose said, beaming as the pair embraced in the cold.

Although Pelosi reached out with congratulatory calls and has begun meeting with some of the incoming members, her reception offered an opportunity for several of the new representatives to meet her in person. Many have yet to fully endorse Pelosi’s bid to reclaim the speaker’s gavel.

But one Washington veteran, Donna Shalala, the newly elected congresswoman from South Florida, did not hesitate to offer her endorsement.

“She’s a skilled leader, she can manage the caucus, which is complicated, and frankly she is responsible for passing Obamacare,” said Shalala, who served as health secretary to former President Bill Clinton and is, at 77, likely the oldest freshman.

The youngest freshman, Ocasio-Cortez, could be spotted inside, posing for pictures.