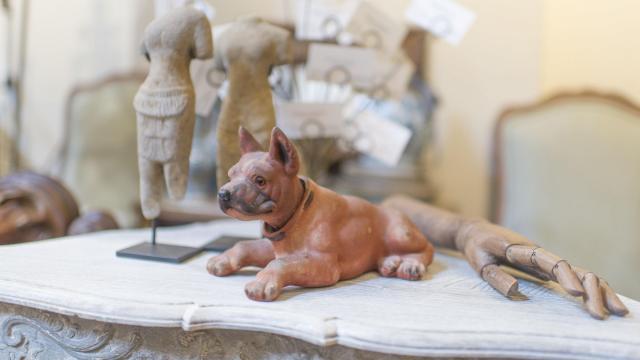 BRUSSELS — Ask many people what comes to mind when they think of Brussels, and chances are they’ll say the European Union, NATO, wonderful chocolate shops and arguably the world’s best moules et frites. But when Olga Polizzi, deputy chairwoman and director of design at the Rocco Forte Hotels, thinks of the Belgian capital, she thinks of great antiques.

Polizzi has traveled to the city many times for shopping trips to pick up unique pieces for the hotel group’s global properties, including the Hotel Amigo in Brussels. She said the neighborhood of Sablon was the best place to start shopping.

“When I need something for a suite or some bits and pieces of something different, the Sablon is amazing with one little shop after the other with lovely things” she said, adding that because the city is such a geographical and political crossroads, it’s a great place to find antiques from all over Europe, Africa and Asia.

“It is that much cheaper than anywhere else in Europe; you can find from the very old to the 1940s and 1950s,” she said. “I have found some really good pieces in the past, and there is a bit of everything.”

Fans of antiquing are spoiled for choice in Brussels, where French art nouveau, midcentury furniture, ornate chandeliers, Central and West African tribal masks, mirrors, lighting and objets d’art are easily accessible. One of Polizzi’s first stops is Michel Lambrecht, who not only has his main store right in the heart of Sablon, but also an unmarked shop hidden down a cobblestone alley about 1,000 feet away.

At the main store, look for reupholstered armchairs, side tables and cool lighting, while the other shop is filled with early 20th-century stuffed animal toys, large classic dark-oak dressers and Indian food trunks. Lambrecht specializes in what he calls “antiques engineering,” meaning he recovers and repurposes items like a dark-oak chest that he has bleached and then painted with an imitation marble top, or sections of an old painted banister transformed into chic lamps and sconces.

“I like simple things that have been used all the time, curiosities,” he said, as he drew me a map of a few of the streets to hit in Sablon. “Maybe I am collecting too much so I am opening a new warehouse next year.”

My next stop was to Alain Naoum Antique African Art, a by-appointment dealer, which has sold Central and West African tribal art pieces for more than two decades. Partially because of Belgium’s history as a colonial power in Central Africa, Brussels has some rare examples of 19th- and 20th-century masks and carvings. The city also has experts who have spent years collecting and researching the meanings and symbolism of the pieces they sell.

Naoum, a self-described autodidact in his field, explained the carved 19th-century antelope from Mali that was worn as a head adornment during ceremonies and was priced at 45,000 euros (about $50,000). Naoum also offered a smaller 19th-century carved piece in human form with dozens of raised wooden bumps made by the Songye people of what is now known as the Democratic Republic of Congo and meant to ward off smallpox; he was selling it for 30,000 euros.

My interest in African tribal art led me to Patric Claes (93, rue des Minimes; no website), and as I wandered in, Claes — whose son Didier also runs an eponymous gallery focused on Central African antiques not far away — was meeting with a professor of African art history from Ohio State University. Claes had some intriguing pieces, including a black-and-white mbangu (sickness) mask made by the Pende tribe in Congo from the mid-20th century that, with its twisted eyes and lips, depicted a scarred epileptic.

For a completely different aesthetic, I ventured to Chimara, which specializes in 19th-century Vienna bronzes. Their bright objets d’art included two 18th-century wooden-lacquered jewelry boxes from Antwerp that had ivory, Japanese mother-of-pearl and tortoiseshell inlay (the bigger one was going for 17,000 euros). I then headed to Via Antica (40, rue Blaes) in the Marolles neighborhood, which houses more than 30 dealers focusing on furniture, lighting and design from the mid- to late 20th century. A pair of Maison Charles brass and bronze corncob lamps from the 1960s that were made in France caught my eye, as did a rather funky stuffed wallaby.

Though I had missed the Sablon Antique Market — it’s open only on weekends — I did get a chance to check out Place du Jeu de Balle Flea Market (no website), which is also in Marolles. Like most flea markets, you have to dig around to find the good stuff. But a few stalls were carrying a handful of pretty, if not necessarily valuable, sets of china along with some quirky figurines.

I suspect that from now on when I think of Brussels I will, like Polizzi, focus first on antiques before chocolates and bureaucracy.