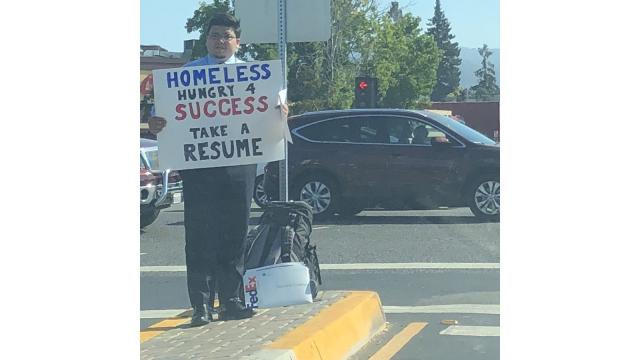 After standing on a street corner and asking strangers for employment, one homeless man in Silicon Valley has been overwhelmed by job offers.

David Casarez, a college graduate in his 20s, was spotted holding a sign that read, "Homeless hungry 4 success take a resume." He was handing out his resume to motorists in Mountain View, California -- where Google is headquartered -- and hoping to make a job connection.

Casarez moved to California several months ago, seeking a job in the tech industry. He recently ran out of money and said he had to get creative to get noticed, according to CNN affiliate KRON.

"I wanted to be in the Bay Area with all of the other tech companies. If you want to compete and play with the big dogs, you'd better come out here," he told KRON. "I was like, 'Let me try something to stand out.'"

The sign and perseverance paid off. After a woman shared a photo of Casarez with his sign, as well as his resume, on social media, he has been inundated with people trying to help.

"I would say it's way more than 200 at this point. Lost track as my inbox has been flooded," Casarez told CNN.

A woman driving by stopped to help him

Jasmine Scofield said she was driving by on Friday evening when she spotted Casarez in dress clothes. She flagged him down and took a copy of his resume. Later she posted the photo of Casarez and a photo of his resume online.

"He came to Silicon Valley with a dream to be successful in tech and has a lot to offer the community. He's sleeping in parks and still trying to get freelance work, interviews, and applications in," Scofield wrote on Twitter.

After meeting the college graduate, Scofield wanted to do something more to help him. She posted a photo of him holding his sign and shared his resume on Twitter. The post has been shared more than 135,000 times on Twitter as of Monday afternoon.

"I figured I have to know somebody who knows somebody. So I figured I could post it on Facebook and Twitter," Scofield, who works in finance and tech, told CNN. "If I were in that position, I'd want somebody to help me."

Casarez graduated from Texas A&M University in 2014 and worked several jobs at General Motors until 2017, according to his resume. He moved to California and has been a freelance web developer since March.

Scofield was born and raised in the Bay Area and moved to Silicon Valley three years ago, she said.

"In my experience, it's a really cutthroat community to be a part of if you don't come here with something already guaranteed or a pre-established network of resources," she told CNN.

Scofield talked about her struggles of working as a contractor and not being able to find a permanent job. After three years of trying to get her resume to stand out, she is finally starting her first direct-hire position on Monday.

After she met Casarez, Scofield called him on Friday night and spoke with him for an hour, she said.

"He seemed to have a really positive outlook on the situation he's in. He's extremely driven and understands he may have miscalculated on what it takes to make it out here in Silicon Valley," she said.

"He's determined to fight, hustle and follow the dream he came out here to chase. He seems to know a lot about tech and a lot about the industry. On paper, it seems he's set up for success."