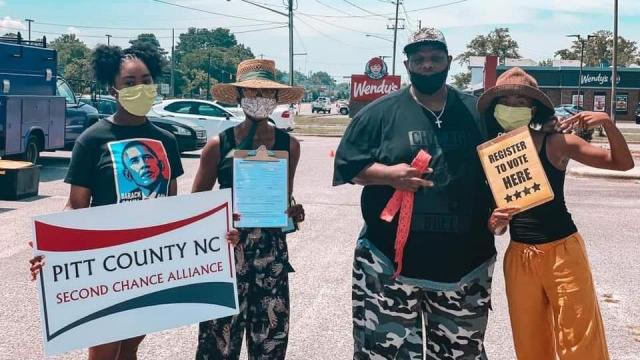 America — and the South in particular — has a long history of voter disenfranchisement.

"Before the Civil War in North Carolina, a lot of people don't know that free Blacks could vote until the 1835 Constitution," said Orville Vernon Burton, a Judge Matthew J. Perry distinguished professor of history at Clemson University. "As voters, they were making a difference in some areas. At the time, those who held political power became worried and it was debated about how to disenfranchise African Americans who were free, and they succeeded in doing so. Later, the 14th Amendment in 1868 provided former slaves with national citizenship, and the 15th Amendment in 1870 granted black men the right to vote."

Burton notes however, that work was being done behind the scenes to criminalize and subsequently disenfranchise Blacks from voting. A century later, at the height of the Civil Rights Movement, the Voting Rights Act of 1965 prohibited voter discrimination based on race.

Nevertheless, in the years since this landmark federal legislation was passed, voter suppression has persisted and continues to disproportionately affect Black and Brown voters, those impacted by the criminal justice system, people in poverty and other groups.

"Over the last decade in North Carolina, leadership in the North Carolina General Assembly has consistently and brazenly manipulated elections through redistricting and voter suppression laws meant to silence Black voters and to reduce the influence of black political power," said Caitlin Swain, a civil rights attorney and the co-executive director of Forward Justice.

Durham-based Forward Justice is a policy, law and strategy center that is dedicated to advancing racial, social and economic justice in the U.S. South.

"These actions were aimed at expanding and entrenching the majority party's power in this state, using a method of unequally targeting Black and Latinx voters' access to the ballot," continued Swain. "This decade's actions aren't an aberration, but instead represents an echo of the patterns of racialized voter suppression tactics that have been used in North Carolina and in our nation since its founding to exclude equal participation in our democracy."

Federal courts in 2016 and 2017 ruled North Carolina's General Assembly unconstitutionally racially gerrymandered its congressional and legislative districts in the 2011 cycle, "diluting the black voting strength in the state."

Swain said the General Assembly relied on the power it gained through this racial gerrymander to pass bills directed at silencing Black voters, which included the passage of House Bill 58 (H.B. 589) in 2013, directly following the Supreme Court's ruling in Shelby v. Holder, lifting the full protections of the Voting Rights Act of 1965 in North Carolina.

HB 589, commonly known as North Carolina's "monster voter suppression law," required citizens to present a specific form of ID such as a passport or driver's license in order to cast a ballot. Early voting was also reduced from 17 to 10 days and the bill changed other methods of accessing the ballot including entirely eliminating same day registration.

In 2017, this bill was overturned by the 4th Circuit Court of Appeals's ruling in North Carolina NAACP v. McCrory.

"Forward Justice, as a part of our commitment to ensuring equal access to the ballot, was proud to serve as counsel to the N.C. NAACP. The winning appeal found that the General Assembly acted with unconstitutional racially discriminatory intent when it targeted the rights of Black voters with 'surgical precision.' The N.C. NAACP's victory resulted in same-day registration continuing in our state and the invalidating of the discriminatory photo voter ID requirements. It restored out-of-precinct voting options and restored 16- and 17-year-old pre-registration options," said Swain.

"Then, directly following the 2016 election, the North Carolina General Assembly came back to work and during the lame-duck session in 2018, passed a new photo voter ID requirement. Again, we represented the N.C. NAACP in challenging this requirement as also racially discriminatory and passed with discriminatory intent to suppress Black and Latinx voting rights. The N.C. NAACP was successful in that case too — the federal court granted an injunction on Dec. 31, 2019 to stop the photo voter ID law from going into effect in March 2020 for the March primary and that injunction remains in place, prohibiting the state from imposing a photo voter ID requirement on voters today," finished Swain.

Swain said this work is, by definition, defensive work to support the people of North Carolina standing up to retain the rights they already have and the Constitution guarantees them.

Forward Justice not only works on the defensive, but also on the offensive to catalyze success for social movements and to bring litigation that expands democratic opportunities for people affected by injustice. In addition to fighting to make the promise of the Voting Rights Act real on behalf of organizations like the N.C. NAACP, the legal and strategy center is working to secure voting rights for formerly incarcerated people and the organizations that support them, namely in the N.C. Superior Court case Community Success Initiative v. Moore.

In Community Success Initiative v. Moore, plaintiffs seek to restore the right to vote and give a voice to nearly 60,000 people in the state currently unlawfully denied that right based on past felony conviction. This case is a step forward in the long fight to uproot and overturn the impact of North Carolina's history of racially motivated voter disenfranchisement efforts.

"It also represents an historic offensive effort to advance justice by expanding who is included in the 'we' of 'We, the people,' so it opens up access to the ballot to more voices," said Swain.

Community Success Initiative v. Moore was filed in November 2019 by a legal team that includes Forward Justice, Arnold & Porter and Protect Democracy, and is seeking to grant individuals with prior felony convictions the right to vote during the time in which they are living in a community, but continue to be under probation and post-release supervision.

In North Carolina, people who have been convicted of a felony lose their right to vote not only during any period of incarceration, but during the entirety of any state-imposed probationary period.

Burton is an expert witness in the case and wrote a 95-page report assessing the history and intent underlying the North Carolina constitutional provision and statutes disenfranchising persons convicted of crimes.

In his report he states, "As Black political activism threatened the power of the white ruling elite, legislators turned not only to felony disenfranchisement, but also to segregation, suffrage restrictions, and other measures designed to break the political and economic power of Black communities. While felony disenfranchisement was primarily used as a barrier to Black political activism, it also served to restrict the citizenship rights of all economically disadvantaged North Carolinians. Felony disenfranchisement restricted the voting rights of economically disadvantaged North Carolinians beginning in 1776 and continuing to the present. Reformers, from the 1870s to the 1970s, recognized that disenfranchising people who committed felonies would disproportionately impact working class North Carolinians who could ill-afford the expense of having their citizenship rights restored."

"There is no doubt that in North Carolina's history, felony disenfranchisement legislation was enacted by legislators as a way to keep African Americans from voting and participating in democracy," said Burton, who noted literacy tests, poll taxes, redistricting and violence were also tactics employed throughout history to thwart or silence Black voters.

Today, African Americans make up 34 percent of the prison population despite accounting for only 13 percent of the U.S. population and are incarcerated at five times the rate as white Americans. In North Carolina, expert reports submitted in the case show although black people constitute 21 percent of the voting age population, they represent 42 percent of the people disenfranchised while on probation, parole, or post-release supervision.

In 44 counties, today, the disenfranchisement rate for black people is more than three times the rate of the white population.

"Limiting access to the ballot to any group is the antithesis of an inclusive democracy. This case, led by courageous plaintiffs and organizations like CSI, Wash Away Unemployment, Justice Served, and the N.C. NAACP, represents an opportunity to unlock the right to vote for nearly 60,000 people who are currently denied the right to vote by the state of North Carolina due to past criminal convictions, who should not be," said Swain.

Alongside the legal efforts to unlock the vote, Forward Justice works with the N.C. Second Chance Alliance to counteract these current harms of the law by conducting outreach efforts targeted at low-propensity voters; especially those who have been previously disenfranchised by existing laws.

Community events are used to provide valuable information and guidance on the somewhat complex task of determining voter eligibility under the current felony disenfranchisement laws.

"Closing voter participation gaps and uncovering the barriers to doing so has been a focus of the Second Chance Alliance. It's by organizing community outreach events for voter registration and education that we demonstrate the importance of community engagement in voting rights restoration work," said Portia Bright Pittman, Community Organizer for the Pitt County Chapter of the N.C. Second Chance Alliance. "In order to see the change it must come from all of us, not just some of us, standing up and voting for policies that will not threaten the lives and livelihoods of those who helped build this nation."

The plaintiffs in CSI v. Moore have requested swift relief in an effort to ensure that thousands in the state do not have their voices unconstitutionally denied in the coming November election. The hearing date is set for Aug. 19, the same month as the anniversary of the original passage of the Voting Rights Act of 1965.