A High School Education and College Degree All in One 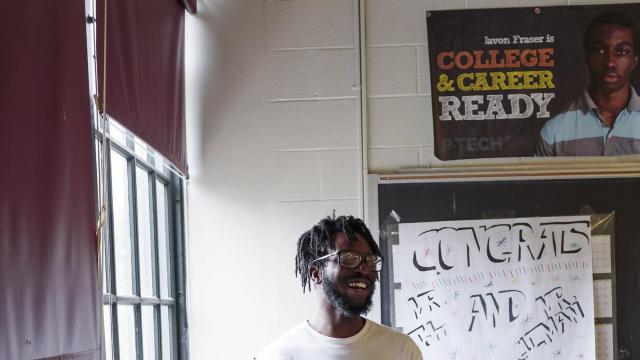 NEW YORK — Chigozie Okorie likes to say that he’s the “high school student who never left high school.” He’s kidding, sort of: Not only did Okorie graduate from high school, he also collected an associate degree and a full-time job at IBM within four years. And he’s now studying communications at Baruch College and expects to graduate next year.

Not bad for someone who’s not even 20.

No one is more surprised than he. “When you say things out loud it becomes so much more shocking,” said Okorie, who grew up in the Flatbush section of Brooklyn. “I say it in my head, but it doesn’t impact me unless I say it around other people: ‘Wow, I’m going to graduate within a year with a bachelor’s and it only took me how many years?'”

Okorie’s job as a program associate in education at IBM requires him to spend much of his day at his alma mater, Pathways in Technology Early College High School, or P-Tech, in Crown Heights, Brooklyn. P-Tech was started in 2011 as a partnership between the New York City Department of Education, the New York City College of Technology and IBM. It is a six-year program that gives students from lower-income backgrounds the chance to earn a high school diploma along with a cost-free associate degree in a STEM field. Some, like Okorie, do it in even less time.

“The question was, how do you better connect students with the future of work and create a seamless pathway for them to enroll in college?” said Rashid Davis, the founding principal of Brooklyn P-Tech. “When we started, more than 70 percent of students entering the City University of New York were graduates from the New York City Department of Education. However, more than 70 percent of those students needed remediation — meaning, they’re not completing a two-year degree in real two-year time. So the thought was, if you have this public-private partnership, could an early start lead to better outcomes?”

P-Tech’s mission is to do just that. During their time at P-Tech, students are paired with a professional mentor and are eligible for a paid internship at IBM. (Okorie helps run the mentorship program). On graduation, many go on to four-year colleges; others take full-time jobs at IBM, although they’re not required to.

“We’re not preparing kids for jobs necessarily at IBM, we’re preparing them for jobs in the IT industry,” said Grace Suh, vice president for IBM Education. “We’d love them to come work at IBM, but the idea is that we’re giving them the skills they require to do whatever kind of job and work in whatever place — whether it’s IBM or a startup.””

So far, 110 schools in eight states and Australia, Morocco, and Taiwan fall under the P-Tech umbrella; California, Colombia and Singapore are set to open schools soon. More than 500 industry partners and 77 community colleges also participate.

P-Tech is filling a necessary void. According to June 2018 data from the Federal Reserve, American students and their families carry more than $1.5 trillion in student loan debt. A Brookings study found that nearly 40 percent of student borrowers may default on their student loans by 2023.

P-Tech students graduate with no debt.

What’s more, college graduation rates among low-income students haven’t changed very much in 40 years. A 2016 report by the Pell Institute and the University of Pennsylvania’s Alliance for Higher Education and Democracy noted that the percentage of students from the poorest families who had gotten college degrees was 6 percent in 1970. By 2013, that number had increased only to 9 percent. And only 6 percent of college graduates from low-income, minority urban schools completed a STEM degree within six years, according to the National Student Clearinghouse.

Yet dual-enrollment programs like P-Tech, in which high school students take college or university courses, have been found to help students complete college.

“It’s not enough just to say ‘free college,'” Davis said. “There’s free high school across the country, but that doesn’t mean that everyone is finishing with the skills they need to be prepared to move on. So it really is the industry involved that actually can say ‘We know that students need more research skills, we know that students really need to know how to present projects, make an argument.’ That makes a difference when they’re trying to get a job.”

To the students at P-Tech, Davis is somewhat of a rock star. Okorie chose P-Tech — there are no required entrance exams — after attending a high school fair with a friend. After the friend met Davis, he excitedly told Okorie about him. “He said, ‘There’s this guy with crazy long dreads and he’s wearing these super cool yellow sneakers and he’s telling me I can get a job at IBM and an associate degree at the same time,'” Okorie recalled with a laugh. “Once he told me that and I spoke to Mr. Davis, they sold me.”

Morsaline Mozahid, 17, will graduate from P-Tech in December with his associate degree. He thought he wanted to have a career as a video game designer, but after taking a computer and coding class at P-Tech he realized that he “kind of hated it.”

He’s grateful to P-Tech for giving him the chance to discover this sooner rather than later and hopes to study medicine at Johns Hopkins University. Otherwise, he said, “I would have spent a year in college trying to figure it out.”