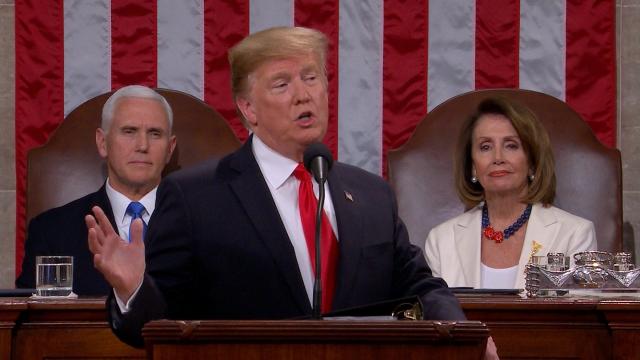 CNN — Democratic Party rising star Stacey Abrams sharply criticized the Trump administration and Republican leadership on Tuesday night in her response to the President's State of the Union address.

Abrams blamed the President for the recent partial government shutdown, which became the longest in US history, calling it "a stunt engineered by the President," and argued that the aspirations of American families "are being crushed by Republican leadership that ignores real life or just doesn't understand it."

The 45-year-old narrowly lost a gubernatorial bid in the reliably red state of Georgia last fall, but rose to national prominence in the process. She made history as the first black woman to give the Democratic response to the State of the Union.

Abrams, who has made voting rights a signature issue, warned during her speech that voter suppression is "real" and described protecting the right to vote as "the next battle for our democracy." After outlining a host of Democratic priorities, she said, "None of these ambitions are possible without the bedrock guarantee of our right to vote," adding, "Let's be clear: voter suppression is real."

Abrams continued, "We cannot accept efforts to undermine our right to vote," and said, "This is the next battle for our democracy, one where all eligible citizens can have their say about the vision we want for our country. We must reject the cynicism that says allowing every eligible vote to be cast and counted is a power grab."

"The foundation of our moral leadership around the globe is free and fair elections where voters pick their leaders, not where politicians pick their voters," she said.

Abrams ticked through a litany of other issues, ranging from gun control to immigration reform to action on climate change, criticizing the current administration and contrasting the President's agenda with those of the Democratic Party.

"We know bipartisanship could craft a 21st century immigration plan, but this administration chooses to cage children and tear families apart," Abrams said in one of her most searing criticisms.

She added, "Compassionate treatment at the border is not the same as open borders" and said that "Democrats stand ready to effectively secure our ports and borders." But in a pointed message to the President, Abrams said, "America is made stronger by the presence of immigrants, not walls."

On the subject of gun violence, Abrams said, "This White House responds timidly while first graders practice active shooter drills," adding, "from now on, our leaders must be willing to tackle gun safety measures."

The speech gave Abrams a high-profile platform to counter the President's own message to Congress and the nation and comes amid speculation that she may run for a Senate seat in 2020.

She talked about her own experience working with volunteers to give out meals to federal workers placed on furlough during the shutdown, saying, "Making livelihoods of our federal workers a pawn for political games is a disgrace."

Abrams said that the shutdown "defied every tenet of fairness and abandoned not just our people -- but our values."

She spoke about the country's fight against racism, saying, "We continue to confront racism from our past and our present, which is why we must hold everyone from the highest offices to our own families accountable for racist words and deeds and call racism what it is -- wrong."

Abrams has said herself that she plans to run again for elected office and has talked with top congressional Democrats about the possibility of a Senate run.

Abrams met separately in January with Schumer and Sen. Catherine Cortez Masto of Nevada, the chair of the Democratic Senatorial Campaign Committee, to discuss a possible 2020 Senate run, a source familiar with the meetings told CNN last month.

And after her gubernatorial defeat, she told CNN's Jake Tapper on "State of the Union" that she does "intend to run for office again," though she said, "I'm not sure for what and I am not exactly certain when."

There are risks that come with delivering the State of the Union response, and there have been memorable stumbles in the past for other rising stars who delivered their parties' rebuttals.

Sen. Marco Rubio of Florida was widely mocked after he awkwardly reached down to take a sip of water while delivering the GOP response to President Barack Obama's State of the Union in 2013. The moment -- and the memes it led to -- ended up overshadowing Rubio's message.

Abrams jokingly referred to the now-infamous Rubio moment in recent comments ahead of her speech as reported by Axios, saying, "The first thing I'm going to do is hydrate."

The message she delivered also comes at a time when the Democratic Party continues to grapple with whether and how it can make inroads in rural parts of the country and southern states, both of which have become Republican strongholds, ahead of the 2020 presidential election.

Despite Abrams losing her gubernatorial bid, Democrats have drawn encouragement from how close and competitive the race ended up.

Abrams ultimately lost by less than 2 percentage points to her Republican opponent, Brian Kemp, just narrowly missing the threshold for forcing a runoff (that would have required holding Kemp, who finished with 50.2% of the vote, under 50%).

Voting rights ended up as a focal point of the race, which ended on a contentious note.

When she ended her campaign, Abrams delivered a series of sharp criticisms of Kemp, who she had previously described as an "architect of voter suppression."

Kemp, who served as Georgia secretary of state, resigned from his position the day after the contest, amid criticism of his handling of Georgia's elections -- including ballot rejections and malfunctioning voting machines -- and a series of lawsuits.

Before her gubernatorial bid, Abrams held the position of minority leader in the Georgia House of Representatives.

After the election, she launched a voting rights organization and has continued to speak out on that issue.