A Gym Chain Is Banning Cable News. It’s for Your Health. 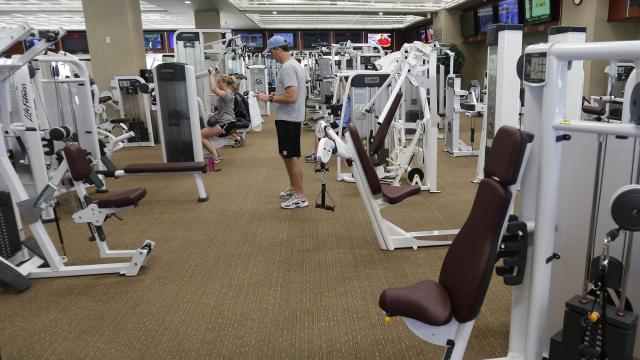 Go to the gym and you will see them everywhere: the talking heads on CNN and Fox News, as ubiquitous as sports coverage in bars. But one fitness chain has cut them off, implying that cable news coverage is not conducive to a “healthy way of life.”

Life Time, a Minnesota-based company with 130 locations in 27 states, decided recently to remove cable news — both left- and right-leaning stations, including CNN, Fox News and MSNBC — from the large-screen TVs in its gyms. The new policy took effect this month.

The decision “was based on many member requests received over time across the country, and in keeping with our overall healthy way of life philosophy and commitment to provide family-oriented environments free of polarizing or politically charged content,” Natalie Bushaw, a Life Time spokeswoman, said in an email. She added that local news stations would still be shown.

An official statement posted on Twitter last week drew a response as polarized as the political content on the discarded channels. Some people praised the removal of what they described as a source of “negativity,” and thanked Life Time for making it easier to use the gym as an escape from the world. But many others expressed anger and accused the company of censorship. Members who object to particular programming can simply choose not to watch the screens playing it, they said.

Uchechi Egbuchulam, a gym member in Massachusetts, said in an interview Tuesday that the move fit with Life Time’s brand, which emphasizes that health is about the mind as well as the body. The news can be upsetting and stressful, and “when you want to work on changing your mentality,” she said, “having that on 12 different televisions while you’re trying to run on the treadmill is not the most conducive.”

“I think they’re looking out for everybody’s well-being and truly thinking about the words that they say as a brand,” Egbuchulam said. “They’re providing opportunities for people to take care of their whole self. This is one way that they’re choosing to do that as a company.”

But Bryan Sieve, a member for more than 10 years, said the change hurt his ability to manage his time and had stirred up “a hornet’s nest” at the branch he goes to in Maple Grove, Minnesota. As a businessman with a full schedule, he said, it is important for him to multitask during his morning workout, and he enjoyed the large selection of channels on his gym’s TV screens.

The company gave no public notice before making the change, he added.

Sieve said that he would switch to a competitor if the cable news channels were not restored by the end of the month, and that he had told the Maple Grove manager as much.

“I’ve never seen anybody complain about this, none ever in our club,” he said. “Who are these faceless people that all of a sudden have huge sway over changing a policy at Life Time Fitness without member input, consent or even fair warning?”

Bushaw, the company spokeswoman, declined to say how many members had requested the change, but wrote: “Suffice it to say, this has been a growing issue over years, not weeks or months. Ultimately, we believe this change is consistent with the desires of the overall membership.”

She noted that the channels in question were still available on smaller screens installed in some cardio machines — a feature she said was being added at more clubs. Members can also use their gym’s Wi-Fi to watch shows on personal devices, she said.

Jennifer Berlanga, a Life Time member in Dallas, called that a reasonable balance.

“I think giving members the choice to watch it on their cardio station or personal devices is a great way to compromise between those who want nonstop news and those who don’t,” Berlanga wrote on Twitter.

For her, she said, “it will be nice to enter the cardio room without the barrage from both sides.”

Asked about this option, Sieve called it “hogwash.” He does not want to carry his iPad or phone around the gym, he said, and none of the cardio machines at the Maple Grove facility have built-in screens. Even if they did, he added, those screens would not be useful when he lifts weights or uses noncardio machines.

In a video message on Twitter, Irene Kistler, a school librarian in Texas, criticized the decision in much grander terms.

“Don’t be afraid of democracy,” Kistler said. “Put the news back on. Banning the news is really kind of un-American.”

Few, if any, other major fitness chains in the United States have taken similar steps.

Representatives of several companies did not respond to requests for comment on Tuesday afternoon. But McCall Gosselin, a spokeswoman for Planet Fitness, said the issue had “never come up.” No Planet Fitness members have complained about the presence of cable news in their gyms, she said.