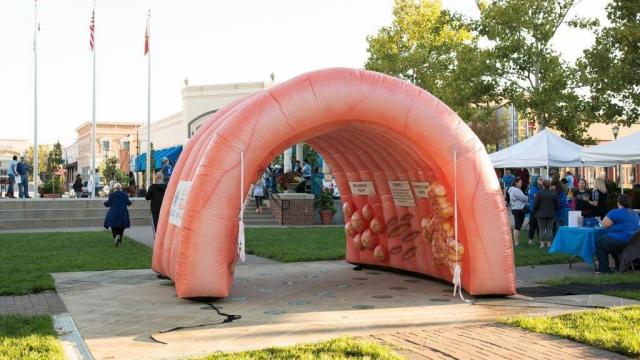 It’s a mystery that kept residents of Kansas City, Missouri, on the edge of their seats for a dozen days:

Who, pray tell, who would want to steal a 10-foot-by-10-foot, 150-pound, pink inflatable intestine, which is shaped like an archway and offers something of a colonoscopy walking tour?

But steal it someone did, earlier this month, prompting a police investigation, a pithy #StolenColon hashtag, a deluge of bathroom jokes and demands for answers.

The giant inflatable colon, which is used to raise awareness about colorectal cancer, quickly became a social media sensation, offering a lighthearted break from news of violence and political division.

And late Monday afternoon, a sense of relief swept over the Midwestern city and well beyond.

“BREAKING: WE HAVE RECOVERED THE STOLEN COLON,” the Kansas City Police Department announced on Twitter, ending the suspense.

The mystery began Oct. 18, when the inflatable colon was left uncovered in a truck in a driveway, where it was being kept ahead of a breast cancer awareness event. It disappeared overnight, said Stacie Moody, the event director for the Kansas City chapter of Get Your Rear in Gear, which raises awareness for colorectal cancer with an annual 5K race.

“Next thing I know someone had created a hashtag for it,” said Moody, whose group raised the money for the inflatable colon.

And then came the inevitable puns.

“Does anyone know the scope of the crime?” journalist Katie Couric tweeted. “Hopefully, there’s no obstruction of justice. We need to flush out what happened here and get to the BOTTOM of it.”

A $1,000 reward was offered for information leading to the return of the colon, which was valued at $4,000, The Kansas City Star reported. A fundraiser to replace it raised more than $11,000, enough to buy two new inflatables, according to the Colon Cancer Coalition, a group that raises awareness of colorectal cancer, encourages screening and coordinates Get Your Rear in Gear races.

“Even with the replacements coming we are still hoping for our stolen colon to be returned,” the group said on its website. “We want to hear all the stories it has to tell, then give it a bath, provide any needed repairs, and put it back on the road to raise even more awareness about colon cancer screening and save more lives!”

Finally, on Monday afternoon, the police reported a break in the case.

“Thanks to a tip, officers found the giant, inflatable, pilfered intestine in a vacant house,” the department said.

The University of Kansas Cancer Center, where the colon is usually stored, issued a jubilant news release with the headline: “Stolen Colon Found!”

“Finally some good news in this world,” one person tweeted.

“Our national nightmare is finally over!” declared another.

But one part of the mystery remains unsolved: Who stole it?

No arrests had been made as of Monday night. In any event, Moody said her organization did not plan to press charges. (It’s unclear whether anyone would receive a reward.)

“Honestly, this has been kind of like the colon cancer lottery for us,” she said, noting that the case had raised more awareness than the inflatable by itself ever could.

The widespread attention had led some to suspect that the theft was an insides — er, inside — job.