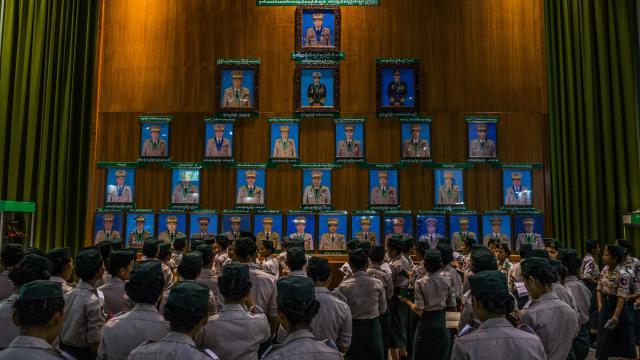 NAYPYITAW, Myanmar — In the colossal museum built by Myanmar’s military to honor itself, the general barred from Facebook has his face up everywhere.

His portrait graces the cavernous entrance hall of the museum, with its soaring ceilings and marble floors. In an exhibition recounting Myanmar’s martial history, his photo is at the top of a pyramid of 32 framed shots of other military leaders.

In other halls, his image hangs alone.

For years, Senior Gen. Min Aung Hlaing, one of the most powerful people in Myanmar, presided over ruthless campaigns targeting minority groups along Myanmar’s borders.

Under his charge, the military drove out more than 700,000 Rohingya from the country’s west.

An important part of the campaign against the Rohingya was waged on Facebook, and the general, along with other military leaders, used troll farms and fake accounts to seed ethnic hatred and build support for what the United Nations has called “ethnic cleansing.”

Now, though, the general has been driven off Facebook; the company shut down his accounts in August.

Yet the museum remains a kind of Facebook profile for his accomplishments, and those of the military.

“I think the military wanted to build this massive museum to show off its guardianship of the country,” said U Ye Myo Hein, an executive director at the Tagaung Institute of Political Studies in Yangon, Myanmar’s largest city. “But it’s also a sign of their megalomania.”

The museum sits in the country’s capital, Naypyitaw, itself an even larger show of the military’s long legacy of almost unlimited power in the country.

Built from scratch in the early 2000s when the military junta held full power, the city was carved out of an expanse of scrubland nestled between two mountain ranges in the center of the country.

In 2005, with little warning, the military announced that the artificial city would become the country’s new capital, even though it was still a construction site. Bureaucrats dutifully picked up and relocated to a half-complete city that lacked basic amenities.

Some have theorized that the new city was created as a safeguard against invasion, and also protests. It has remained the seat of political power, even as the military stepped back and allowed for elections that paved the way for the country’s partial democracy.

Fifteen years on, Naypyitaw is a reminder that although the country has the veneer of democracy, the military retains true power. Much in the city is a testament to its authority and its desire to shape how it is perceived.

The monumental buildings seem designed to impress, but mostly they accentuate an overwhelming lack of people.

The roads in the city, which in places swell to 16 lanes, would seem unnecessarily huge even with a crush of vehicles, but there is almost no traffic at all, at rush hour or anytime. Motor scooters easily outnumber cars.

Driving down them feels like cruising on a runway instead of a highway, and many seem like alternate landing strips for the country’s air force in case of war.

The parliament complex, a series of giant concrete structures, has the air of a fortress, with the reservoir surrounding it resembling a moat.

A gilded pagoda towers over the nearby jungle. A replica of the country’s famed Shwedagon Pagoda in Yangon, it stands just a tad shorter than the original to show a smidgen of deference to the sacred Buddhist monument.

The military has a self-appointed role as a protector of Buddhism, the majority religion in this country with Muslim and Christian minorities.

Yet even in a city filled with reminders of the military’s might, the country’s sprawling Defense Services Museum, set on 600 acres, perhaps best showcases the mindset of a military force preoccupied with its reputation and showing off its power.

Unofficial estimates of the museum’s floor space put its size at around 540,000 square feet, not much smaller than the Metropolitan Museum of Art in New York.

“There are military museums in other countries, but the one in Naypyitaw is way too big in comparison,” Ye Myo Hein said.

A dozen display halls, each easily as big as a football field, show off bombs, mines, machine guns, mortars, warplanes and artillery. Photos of military leaders saluting and congratulating other are everywhere.

Less overtly militaristic mementos abound, too — like a soccer ball from when Myanmar’s national team was ably coached by a colonel, and a plaque from the USS North Carolina Battleship Commission, sent in thanks for Myanmar’s help supplying teak to replace the decks of the World War II-era ship.

But aside from groups of soldiers, whose visits are likely mandatory, there are not many people to admire these artifacts.

On a recent visit, museum staff members easily outnumbered the civilians wandering the halls, mostly monks in small groups. One attendant said the museum typically has just a few visitors each day, with an occasional school group.

Nine Burmese political analysts contacted said they could not talk about the museum — because none had been there.

A military representative declined to discuss details of the museum.

For decades the military used newspapers, radio and television to spread propaganda. In the museum’s wing dedicated to psychological warfare, a to-scale model of a television studio recalled those efforts.

New technology has both threatened, and amplified, those abilities. As Facebook began to proliferate in the country in 2012, many voices on the platform were anti-military.

But Myanmar’s military quickly recognized Facebook’s potential as a convenient way to connect to people, making it an important new tool in an ongoing information war, even if its senior general is no longer allowed on the site.

“Facebook is great for propaganda,” said U Myat Thu, a researcher who works to combat hate speech on the site.

And while the museum may struggle to attract visitors, the military has figured out how to draw crowds to a far more accessible location: the internet.

“No one watches military television or reads their newspaper,” Myat Thu said. “But they do look at social media. And there the military has a big audience.”