A Gamble That Bourbon Can Grow Old Gracefully 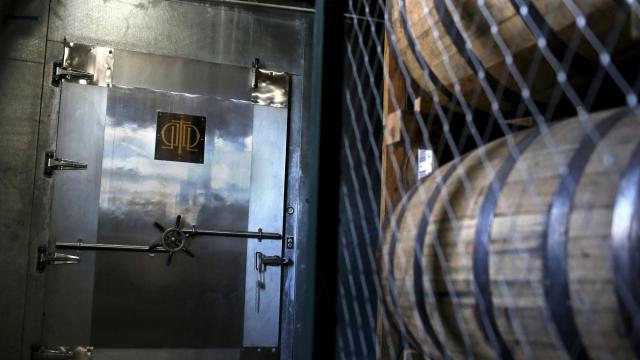 FRANKFORT, Ky. — Bourbon has been on a winning streak for years now. The quintessential American whiskey enjoys a global reputation for quality, with demand outstripping supply and prices steadily rising. But in one arena, it cannot complete with world’s other great whiskeys: age.

Most celebrated bourbons made in Kentucky are between 4 and 12 years old, and many experts, both distillers and critics, believe that is where the whiskey’s sweet spot lies. Additional time in the cask, given the warm climate and the new charred oak barrels that are required by federal law, usually results in astringent, woody flavors.

But consumers are willing to pay big money for older whiskeys, so Buffalo Trace — producer of a host of renowned bourbons including W.L. Weller and Blanton’s — is going to try to make them.

The company already produces a few well-regarded older bourbons, including the sought-after Pappy Van Winkle, which comes in 20- and 23-year old versions (if you can find them). But Buffalo Trace now has a far more ambitious goal in mind: bourbons aged 35 to 50 years.

“Consumers think the older, the better, the more prestigious,” said Mark Brown, chief executive of the Sazerac Co., which owns Buffalo Trace. “We want to get American whiskey on the same competitive footing as Scotch. As part of that goal, we have to conquer this aging thing. And we can’t get there naturally.”

Brown believes he has found a way to harness nature. It is called Warehouse P, and it stands on the Buffalo Trace distillery grounds here in the Kentucky capital. Inside is a second, smaller, temperature-controlled warehouse where the company stores barrels it doesn’t plan to bottle for decades. Some won’t see the light of day until 2068.

The idea behind this deep freeze is to slow the aging process, which will theoretically retain more of the whiskey’s fruit flavors while keeping at bay the unpleasant woody notes associated with over-aged bourbon.

Whether it will work is another matter. Brown and Wheatley admit that they are in terra incognita here.

“We’re taking a giant crapshoot," Brown said. “You are making a barrel today and setting it aside for 35 to 50 years.” To emphasize his point, he slapped his hand against one of the 200 or so barrels stacked inside the room. It contained whiskey distilled in 1993; Brown calculated that the contents were potentially worth $1.3 million. (The barrels in the warehouse include whiskey Buffalo Trace has distilled in the last two years, and a variety of older stock drafted for the experiment.)

If the liquid reacts badly to the unfamiliar, chilly atmosphere, the consequences would be substantial. “We could shock the hell out of it,” he said. “We could open this in 12 months time and it could be a total write-off.”

To ward off catastrophe, the distillery plans to check regularly on the liquor’s progress, comparing barrels in Warehouse P with those of similar age in regular rickhouses.

The contents of Warehouse P represent a collaboration between Buffalo Trace and Last Drop, a rare-spirits company started in 2008 by James Espey and Tom Jago, veterans of the Scotch whisky industry, and Peter Fleck, another spirits professional with a long résumé. It is now run by two of the founders’ daughters, Beanie Espey and Rebecca Jago. (Tom Jago died on Oct. 12.) They comb the world in search of fine spirits of both advanced age and finite quantity, which they then bottle under the Last Drop name and sell to connoisseurs. Their output has been mainly Scotch and Cognac.

Last Drop wanted to expand into American whiskey, but there was a problem. Fifty-year-old bourbons, at least ones that are drinkable, don’t exist.

In 2016, Sazerac acquired Last Drop with the intention of not only assisting in finding rare old spirits, but also laying down barrels of newly made bourbon and rye, as well as rum and single malt whiskey, for future releases. (Last Drop remains family run and autonomous.)

While Buffalo Trace waits for 2068 to arrive, it must keep the Last Drop pipeline flowing. The first fruit of the collaboration, recently bottled, is a bourbon distilled in 1982 by Buffalo Trace (called George T. Stagg distillery at the time), and then moved after 20 years from barrel to a stainless steel tank. The contents filled only 44 bottles, which sell at $4,000 apiece; 25 are allotted for the United States.

Given the long-term nature of the venture, Wheatley can’t help but muse what the future will bring — not just for the whiskey, but for the people who, years from now, might buy it. “I hope people will still be drinking whiskey in 50 years,” he said.