A ‘Gadget Junkie,’ Wearing His Tech and Covering Deals 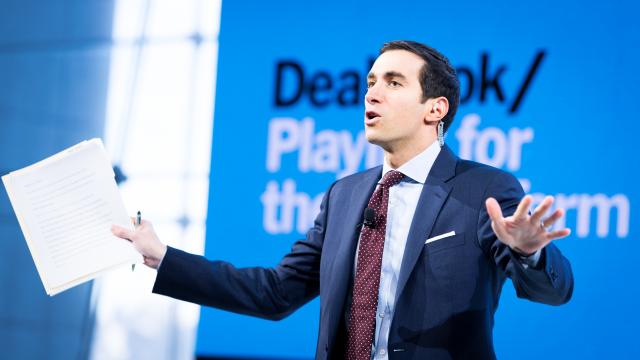 How do New York Times journalists use technology in their jobs and in their personal lives? Andrew Ross Sorkin, DealBook columnist for The Times, discussed the tech he’s using.

Q: What are your favorite tech tools for keeping track of mergers, acquisitions and everything in between?

A: First, you need to know I’m a gadget junkie. I love technology. I live on an iPhone X and a MacBook Pro.

The single best device I use, by a mile, is AirPods, Apple’s wireless headphones. I wear them all day, switching between phone calls and music — and sometimes I just leave them in my ears during conversations (looking ridiculous). Still, the amount of time you’ll save no longer untangling wires is real.

As for information, I’m on Twitter too much; it is still the best news feed out there. (I have two Twitter accounts; one that’s very public and one under another name I use only to follow people for work. I find it works better than creating “lists.”) I occasionally use Buffer to coordinate social media posts when we’re launching something new or trying to push out a particular story.

For talking to sources, I find that more of my conversations are happening on encrypted messaging apps like Signal, Telegram and Confide, though when it is even remotely sensitive, I still always get on the phone.

I sometimes use a service called Relationship Science, which is a fascinating way to understand the connections between the people I cover. Think Six Degrees of Kevin Bacon, or in this case, Six Degrees of Jamie Dimon.

Despite being an unabashed Apple aficionado — I also have an Apple Watch — I happen to use Google apps for much of my life since it’s so easy to collaborate on documents with colleagues and coordinate calendars. (And yes, Google Maps is still better than Apple Maps.) I use Slack to communicate with everyone at work, especially when I’m traveling and not in the office.

I’m on airplanes too much so I’m also a devotee of Bose noise-canceling headphones. Other key pieces of travel technology: Hearos Xtreme earplugs for overnight flights are the best on the market (trust me, I’ve tried them all); if you need to block out light to sleep on a flight or you’re stuck in a hotel room that has terrible shades, get yourself a Lonfrote sleep mask, which is so much better than the freebie on your flight. I carry a handful of extra portable power packs to charge devices on the road. And I always keep a stash of RxBars (blueberry, pumpkin or peanut) with me; they’re about as healthy as you can get when it comes to packaged and packable food.

Q: What could be better?

A: I still want a bigger, longer lasting battery on the iPhone. I can never get enough battery life — and I have battery anxiety looking at the percentage icon dwindle throughout the day if I haven’t found a place to plug in. Same for the AirPods, though I’ve found that’s less of an issue for me.

On my Apple Watch, I desperately want to be able to adjust the sensitivity that activates the screen when I turn my wrist to look at it. (Hey Apple Watch team: I’d make it a bit more sensitive so it turns on more frequently, even at the cost of battery life.)

Q: In your years of writing about deals, which tech merger do you think has had the most significant impact on people’s lives?

A: Google’s acquisition of YouTube in 2006 was game changing. It was the single biggest accelerant of the use of video online. It’s probably the most underappreciated deal of all time in any industry. The price tag was $1.65 billion and YouTube was losing money at the time, so it seemed crazy for Google. But today, the deal looks like a brilliant heist.

Q: You also appear on CNBC’s Squawk Box. How has technology changed live broadcasting and your experience as an anchor?

A: It has probably changed the most on the production side of TV. It used to be that you needed a truck and satellite hookup wherever you’d go. We’d travel with an army of production and technical personnel. But these days you can use services like LiveU, which basically puts an entire satellite truck in a shoe box that connects to the internet or wirelessly using cellular towers. I was just in China and Saudi Arabia and we broadcast entire three-hour live shows with only a handful of people and no satellite connection.

Q: What tech product are you currently obsessed with using in your daily life?

A: Sonos is pretty great. We have a handful of Sonos speakers in our home for music and TV. We also have an Echo and Google Home speaker. I’m thinking about getting the Sonos One, which is supposed to incorporate Alexa, Google Assistant and ultimately access to Apple all in one device.

I read magazines on an app I love called Texture; it’s like Netflix for magazines. If you’re a magazine junkie, it is so worth it.

I’m into sleep trackers like Autosleep on the Apple Watch, but I want to find a device that tracks sleep without wearing anything on my wrist or body. (Or keeping a phone in bed, which I refuse to do.) I also use Nokia’s Withings wireless scale, which is a pretty good way to keep you honest about food consumption — and much easier than constantly entering what you eat in MyFitnessPal or LoseIt, though I’ve used both and they’re good. And I have a Braun Series 7 electric razor that for years I’ve told every male friend is the best thing I use daily, though Braun came out with a new one last year so I don’t know if I’m right about that anymore.

Q: Apple has more than $250 billion in cash. Which companies do you think it should buy, and why?

A: I used to think they should make a big deal, but these days I’m less certain. The next big thing in computing is clearly going to be artificial intelligence and health care. I imagine I’d be investing in those spaces aggressively — but the potential takeover targets are less obvious.