A Funeral for a President, and a Fleeting Unity for a Nation 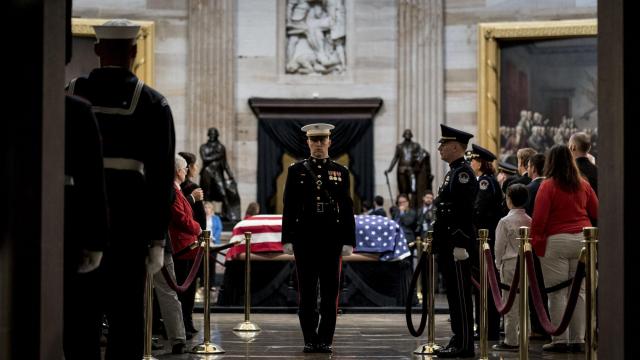 WASHINGTON — Presidential funerals provide a moment for Washington — and the nation — to pause and embrace the better side of our politics.

No one who occupies the Oval Office escapes fierce division — it is the nature of the job. Gerald R. Ford, the last president mourned by the nation after his death in December 2006, angered many with his pardon of his predecessor, Richard M. Nixon. Ronald Reagan, whose elaborate state funeral was in 2004, provoked many divisive fights over his eight years in office. George H.W. Bush, who is being mourned and celebrated this week, was no stranger to harsh criticism on both foreign and domestic issues during his one term.

But instead of dwelling on the inevitable presidential failures, the highly choreographed spectacle of a presidential funeral — a fitting bookend to the heavily scripted inaugural ritual — offers Americans a welcome chance to reflect on the nature and value of public service, to celebrate the achievements of the person and the office.

In this way, presidents can be more unifying in death then they ever were in life.

“We might not agree in historical hindsight on what they did or how they did it,” said Matt Costello, a historian with the White House Historical Association. “But they were always trying to do what is best for the country.”

“In a strange way,” he said, “it is not about the past. It is looking forward to unity and cohesion and to remind people of what makes us Americans.”

That was a sentiment shared by many of the thousands who visited the Capitol through the night to pay their respects to Bush, even though some might not remember the specifics of a presidency that was crucial to the reunification of Germany and the expulsion of Iraq from Kuwait but that struggled with the economy at home.

“There’s not a perfect life or a perfect country,” Pamela Timus, who works at the Securities and Exchange Commission, said as she was leaving Tuesday morning after paying her respects to Bush. “This president worked for American citizens and the good of the country.”

“All decisions he made may not have been favored by all Americans,” she added. “But it was in the best interest of the country.”

The historian Doris Kearns Goodwin said state funerals helped Americans pay tribute not just to a lost leader, but to their shared heritage and the possibilities ahead.

“I think it is a time when we remember the presidency itself, the whole institution of the presidency as something that binds us,” she said. “These moments allow you to feel the history of the country and the belonging. We belong to George Washington and Abraham Lincoln and the forefathers, that is part of who we are. This president is part of that family line.”

Like Reagan and Ford, the presidents before them and those still to come, Bush took steps as president that infuriated some Americans, ended badly and cost lives and money. But he also served with dignity and distinction in the military and various public posts, tried to stir Americans to greater civic involvement and enacted economic policies that paid off while posing a distinct threat to his own political fortunes.

“Whether people agree with every policy that President Bush undertook, you always knew that he did what he thought was in the country’s interest even when it was politically disadvantageous to him, such as the budget agreement with the Democrats,” said Sen. Susan Collins, R-Maine, referring to the 1990 agreement that broke his “no new taxes” pledge. “Right or wrong on the policy, that was a very brave action to take, and it probably cost him the election.”

“My hope is that as we take this pause to honor this great man, that we think about how he governed, the respect and dignity that he showed to adversaries and to friends alike,” said Collins, who paid a final visit to Bush at his home in Kennebunkport, Maine, in September. “George Bush represented an era where you could disagree with someone but still respect and even like the person, where a search for a common ground was applauded, not denigrated.”

She is hardly alone in hoping that the focus on Bush’s humanity and willingness to compromise spurs some introspection in Washington in a time of intense and volatile political warfare. Sen. Amy Klobuchar of Minnesota, who as the senior Democrat on the Rules Committee is involved with coordinating memorial events, said the funeral could be Bush’s “final gift” to government as a remembrance of the virtues of compromise when Congress is trying to resolve multiple year-end legislative conflicts after a contentious midterm election.

“He makes everyone step back and remember why we are really here,” said Klobuchar, who added that events such as the funeral enable “us to step back as a country and remember those who have done extraordinary things like George H.W. Bush. If we don’t do things like this, we have lost our sense of democracy.”

But recent experience does not give much occasion for optimism that any sense of unity and common ground will be long lasting.

The August funeral of Sen. John McCain, which had all the trappings of a state funeral, also marked a moment of bipartisanship, but it dissipated quickly as the Senate plunged into a brutal Supreme Court confirmation fight and President Donald Trump struck a combative tone for the midterm elections. Trump played no role in the McCain observances — he was purposely excluded by the family — but he plans to attend to Bush’s funeral, though he is not speaking at it.

Sen. Rob Portman, R-Ohio, who served in the first Bush administration and visited the ailing president this summer at the family home in Maine, said the potential for bipartisanship remained, despite today’s extreme conflict. And, he said, the intense political environment now is all the more reason to appreciate the character of Bush.

“He wasn’t a guy who didn’t have strong views,” Portman said. “He did, and he campaigned hard. But when it came time for governing, he said, ‘Let’s figure out how to make it work.’ I think we will get back to the center at some point. We have to figure out how to get along here.”

That is a sentiment Bush no doubt would welcome as his legacy.