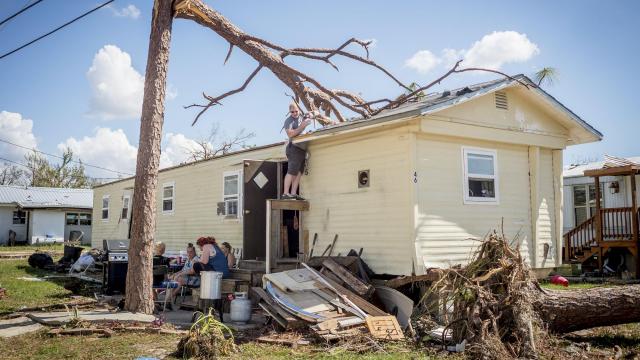 WASHINGTON — Residents and officials from Panama City, Florida, are urging the Federal Emergency Management Agency to speed up its response to a worsening housing crisis that has left thousands homeless or living in buildings damaged when Hurricane Michael tore through the Panhandle nearly three weeks ago.

Officials in Panama City gave FEMA high marks for its initial response to the storm, which slammed into the Panhandle as a Category 5 hurricane on Oct. 10. But as electricity and other services come back on line, they are becoming frustrated with the agency’s complex bureaucracy and increasingly alarmed by what they see as an uncoordinated effort to prevent a permanent exodus of storm survivors from their communities.

Estimates vary widely on the number of people rendered homeless by the storm — local officials place the number at 10,000 to 20,000, with more than 1,000 living in three shelters around the city.

Last week, the mayor of Panama City, Greg Brudnicki, made an impassioned plea to federal officials to fast-track a comprehensive housing plan. He implored them to consider a range of options, including renting modular units and trailers, converting a school into a medium-term residential center, and leasing local condominium and hotel space. Brudnicki even floated the idea of repurposing barges or cruise ships into floating shelters.

“The magnitude of the storm requires the use of all available resources from FEMA,” they wrote.

Legislative staff members privately described the letter as a thinly veiled attempt to light a fire under Long.

“It’s such a huge, complicated organization,” Brudnicki said of FEMA on Sunday. “They are trying their best, but when I sit down with somebody, I expect them to tell me what they are doing and when things will be available.”

“That’s starting to happen now,” he said. “But this is a crisis, and my goal is to make sure that we could take care of all of our people as soon as possible. I don’t want a flight out of here like there was from Katrina, and we have to act now to keep that from happening.”

As of Saturday, 48,665 households in Bay County, where Panama City is, have applied for aid through FEMA — about a quarter of all people living in the Gulf Coast county.

So far, 2,273 homeowners and 6,145 renters have received FEMA rental assistance payouts, totaling about $16.5 million, according to the most recent statistics gathered by the agency’s Atlanta regional office.

Another $17.5 million has been paid out to homeowners for repairs or replacement of their wind-battered houses, a small down payment on what is expected to be a multibillion-dollar federal recovery and rebuilding effort that will span years.

FEMA’s main temporary housing initiative, the Transitional Sheltering Assistance program, provides cash payments to landlords willing to rent to people displaced by Michael. But so many of Panama City’s buildings were damaged that the pool of available apartments is nearing zero. Moreover, many owners of undamaged upscale condominiums and hotels in nearby Panama City Beach are simply unwilling to rent to low-income tenants, Brudnicki and others said. Of the 300-plus options listed in FEMA’s housing database, most were hours away, and only one — the 18-unit Sun-N-Sands Motel — was actually in the Panama City area, according to The Florida Times-Union.

Brudnicki has paid special attention to finding temporary housing for local teachers, who are due to be back in classrooms next week and need to be within easy driving distance of their jobs.

He found dozens of condo units were available for about $200 a night, and FEMA referred the landlord to the shelter assistance program. But there was a hitch: FEMA reported that it did not have the authority to earmark the apartments for a specific profession, like teachers.

Lawyers representing poor tenants displaced by the storm are increasingly concerned that the agency is overstretched by disaster response efforts in the Carolinas and elsewhere.

Federal officials have told their counterparts in Florida that the deployment of trailers to the areas hit by Hurricane Florence in September has made the supply tight, according to three local officials in direct communication with the agency.

FEMA is proceeding according to the timetable it has used in previous storms, and has sufficient resources to address the crisis, an agency spokeswoman, Mary Hudak, said.

At the urging of Brudnicki, Gov. Rick Scott of Florida and lawmakers, FEMA was expected to present a plan to use the relatively undamaged J.R. Arnold High School to house hundreds of people displaced by the storm until repair and rebuilding programs funded by FEMA and the Department of Housing and Urban Development get underway.

The proposal to use cruise ships was rejected out of health and safety concerns, according to a person involved in the process.

The situation is dire, even for those who have a roof over their heads. Several hundred residents of at least one federally subsidized complex, the Macedonia Apartments in Panama City, were given a 72-hour eviction order last week by their landlord, who needs to undertake major storm repairs.

The eviction was halted after a local lawyer, Denise Rowan, who is representing low-income tenants affected by the storm free of charge, intervened as part of an effort by local legal services organizations to help those hit hardest.

“It’s been more than two weeks since the storm came though, and FEMA should have already been mobilizing,” said Rowan, who has put her private practice on hold. “There should be a playbook for something like this, but apparently there isn’t.”

Despite the reprieve, many of Macedonia’s residents, including elderly or disabled people who live on fixed incomes, will have to relocate soon, perhaps to Tallahassee or even Mobile, Alabama, or New Orleans — with no guarantee of returning home. “I need to find something in the area; I have a lot of furniture and I can’t afford to move anywhere without help,” said Bethene M. Barnes, 71, a retired private-duty nurse who walks with a cane after having major surgery on both knees last year.

“FEMA came by yesterday and they didn’t tell me anything,” she said. “They put $167 in my checking account but couldn’t even tell me what it was for, or when I was getting any more. I mean, $167 won’t even get me a U-Haul to move my things into storage.”

Richard King, 38, who lives nearby, said the agency “hasn’t really been that good during this transition.” Several of his friends who live in Panama City have waited more than two weeks for a FEMA inspector to assess the damage and come up with a possible plan for their relocation, he said.

“We do not want to relocate,” said King, an unemployed Navy veteran. “This is my home. I don’t want to move away.”