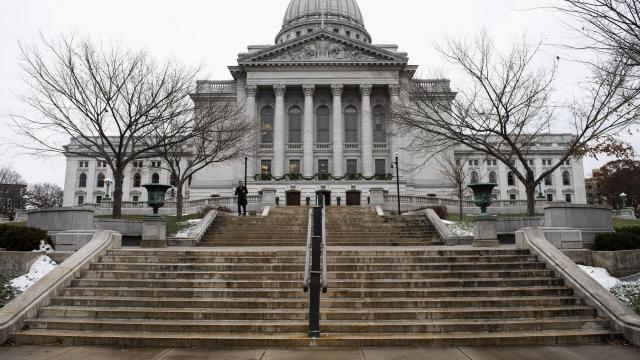 So went a long and tumultuous day in Wisconsin, as Republicans who control this state’s Legislature pushed forward an extensive list of measures aimed at limiting the power of a newly elected governor and attorney general — both Democrats — before either of them take office.

Other parts of the sprawling legislative package would swiftly advance the Republican lawmakers’ agenda on matters unlikely to win a Democrat’s signature, such as limits to early voting.

As the second of two days of intense legislative debate dragged into Tuesday evening, lawmakers had not yet acted on most of the bills. The state Senate approved one of several that were under consideration. Many expected the debate to stretch well into the night and possibly into Wednesday.

Republicans gained control of many Midwestern states over the last decade, but they suffered significant setbacks in the midterm elections, losing governor’s offices and several other top posts in states like Michigan, Illinois, Kansas and Wisconsin. In the weeks since the election, Republican leaders in some of those states have aimed to exert their influence with lawmaking sessions before Democrats arrive.

In Lansing, Michigan, demonstrators were also chanting in that Capitol’s halls, demanding an end to a session in which Republicans voted late Tuesday to scale back a paid sick time requirement for workers and slow a minimum-wage increase. Republican lawmakers also hope to expand their authority in several areas before top state posts are filled by Democrats.

Michigan Democrats were particularly outraged, they said, at the changes passed on Tuesday to the minimum wage and paid sick time rules, because both measures had originally been brought forward as citizen-initiated ballot measures. Republican lawmakers had passed the plans before the election, the Democrats said, only to dilute them now. Those measures await a signature from Rick Snyder, the departing Republican governor who has not said yet whether he will support them.

Several other bills, including one aimed at allowing lawmakers to intervene in the state’s court cases, may soon be debated, though top Democrats, including Gretchen Whitmer, the governor-elect, urged Republicans not to proceed.

In Madison, a full battle was underway.

“It’s an attack on the entire citizenry of Wisconsin,” Russ Hahn, 53, a lawyer from Kenosha, Wisconsin, said of the Republicans’ efforts to push through limits on the incoming governor and attorney general. Hahn, who said he considers himself an independent, had come to the Capitol — as did hundreds of others — to protest as lawmakers debated the fate of the package inside the chambers. Hahn carried a sign that read, “GOP Grinch Stealing Democracy.”

“What they’re doing today,” Hahn said, “is a travesty.”

Republicans, who have controlled state government in Wisconsin since 2011 after they flipped both legislative chambers and the governor’s office, defended their efforts as long-needed changes to rebalance power, which they said had become tilted in favor of the executive branch.

Robin Vos, the speaker of the Assembly, said Republicans owed it to their voters to protect policies enacted under Scott Walker, the Republican governor who was defeated in November, and to institute checks on the power of the incoming Democrat, Tony Evers.

“These are the right things to do,” Vos told reporters. “We are going to make sure the powers of each branch are as equal as they can be.”

Walker’s eight years in Wisconsin have been punctuated by partisan tumult as Walker and his Republican lawmaker allies pushed state policies to the right on matters like union power and taxes. This purple state, which voted for Barack Obama but also helped seal Donald Trump’s electoral win in 2016, has been rived by partisan fighting in recent years.

After Walker proposed sweeping cuts to benefits and collective bargaining rights for most public sector union employees a few weeks into his administration in 2011, thousands of protesters packed the Capitol for days, setting off months of recall elections. Some of the protesters at the Capitol this week said they had marched here before — in 2011 or in other skirmishes since.

Among the Republican bills being weighed this week, Democrats were especially incensed about one that would allow legislative leaders to assign private lawyers to replace the attorney general on certain lawsuits, ensuring that Republican-passed laws get a full-throated defense if challenged in court and that Josh Kaul, the incoming Democratic attorney general, would have less say.

The bills would also prevent Kaul and Evers from withdrawing the state from a lawsuit challenging the Affordable Care Act. Democrats, who focused on health care coverage during their campaigns, promised on the campaign trail that the state would, on their watch, withdraw from the suit. Another provision would prevent Evers from banning guns in the Wisconsin Capitol without permission from legislators, and another would give legislative leaders, not Evers, the majority of appointments on an economic development board that has been a partisan sticking point.

Around the Capitol all day, Democratic lawmakers were blunt in their criticism of what was happening, though they hold minorities in both legislative chambers. The debate in the Senate, where the Republicans’ margin of majority is narrower, was expected to be the most intense.

State Rep. Katrina Shankland slammed the bills as a “power-hungry move” by Republicans “taking out their grubby hands to grab more power.” And state Rep. Chris Taylor described the moves as a “pernicious attack on our democracy.”

All week, residents had streamed into the Capitol. On Monday, they crammed into a hearing room to speak, two minutes at a time. They chanted “stop this coup.” And when a committee chairman said clapping was banned at one point, they waved their arms in the air to signal applause. Almost no one came to support the legislation. Andy Olsen of Madison accused Republicans of rejecting “the basic fundamental ground rules of American democracy.” Martha Pincus of Fox Point said Republicans were “disrespecting their constituents.” A Sheboygan native quoted the prophet Isaiah in explaining his opposition. A man from Wonewoc invoked Eisenhower.

For hours, lawmakers sat quietly and listened, reading off the surnames of the teachers and retirees and college students who accused them of disregarding their votes and dishonoring Wisconsin.

“This committee is intentionally ignoring the will of the people,” said Gail Milbrath, a retired teacher from Milwaukee. “Stop cheating because you lost. It’s such poor sportsmanship. Come on.”

By Tuesday evening, the crowd at the Capitol had dwindled some, but Linda Walter, 62, remained near the Assembly chamber. Walter, a Madison resident, said she did not identify as either Republican or Democrat, but was upset with how lawmakers were treating Evers.

“Republicans are out to get him already,” Walter said.

Walter said she did not buy the claims that Republicans might have considered similar bills under Walker — “total bunk,” she said — and she grew emotional describing the state of politics in her state.

“People just have to start being nice again,” Walter said.

For his part, Walker, the departing Republican, came to the Capitol on Tuesday to light the annual Christmas tree, a 35- to 40-foot balsam fir grown in Plainfield, Wisconsin, and adorned with dairy-themed ornaments, including cheese wheels and cows.

When Walker was called to the podium, boos outnumbered cheers. When he spoke, protesters held signs with messages like “All I Want for Christmas Is Democracy.” Walker left without taking questions, though a day earlier, at a Menorah lighting, he spoke in general support of the Republican lawmakers’ goals without definitively saying whether he would sign the bills.