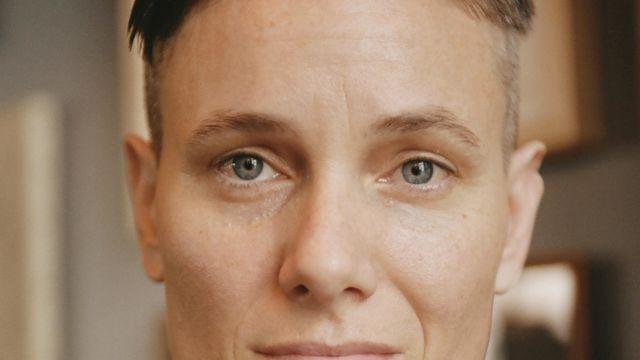 “All my life I’ve been exploring questions about what it means to be in this body,” Legler, 41, said on a recent Friday at La Mercerie, a fashionable French cafe in SoHo, where she is the manager and unofficial mother hen to the young staff.

Years after she rose and fizzled as an Olympics swimmer, Legler, an uncategorizable beauty, became the first woman to sign to the men’s board at Ford Models, blazing a trail for today’s non-binary catwalk stars like Teddy Quinlivan and Oslo Grace.

Time magazine described her as looking “wonderfully comfortable shrugging into tailored suits.” HuffPost asked, “Is she the perfect man?,” while she became a favorite subject of the fashion photographers Inez Van Lamsweerde and Vinoodh Matadin. “Pictures don’t do justice to the way she fascinates me,” Lamsweerde said.

Though Legler has largely retired from modeling (she was shot by Craig McDean for the spring issue of Vogue Hommes International), it’s clear that she remains aware of the powers of her own presentation. Perched in a corner booth, she resembled a young male Hollywood actor in a fitted black Dior Homme suit and black leather Chelsea boots, as she devoured one of the cafe’s buttery crepes.

As a waiter swung by her table, she ordered a second crepe. “I could, and probably would, eat these all day,” she said.

Legler may only be half joking. Addiction is one of the topics she tackles in “Godspeed,” her raw and poetic memoir that was published last month. The book is lean and ferocious — not unlike Legler’s attributes as a competitive swimmer — and offers an unflinching account of the “dogged devotion to routine and repetition” required of Olympians. With lyrical intensity, Legler describes her teenage years as being overwhelmed by an almost existential sense of otherness. Swim meets were followed by alcohol binges and myriad forms of abuse, including one time when a coach threw a plastic chair at her head.

By the time she was 16, she writes: “I swim for every chance to get wasted — after every meet, every weekend, every travel trip. This is what I look forward to and what I tell no one.”

From Olympics to Rehab

“Godspeed” starts in 1992, when Legler reached her towering adult height at the age of 12 and began swimming competitively in southern France. Her abilities in the water nabbed her a scholarship to the University of Arizona. By 19, she was representing France in the 1996 Summer Olympics in Atlanta.

But Legler’s rebellious nature clashed with the robot-like requirements of competition. While at the Games, she shaved her head to protest the sexist double standards of the sport. “There was so much specialness around male athletes, and perhaps I identified more with the perceived sense of freedom that they had,” she said.

Her memoir doesn’t shy away from exposing her dark secrets, including the revelation that she moonlighted as a cocaine dealer to other teammates. (Legler said that alcohol was her only vice, however.)

But her Olympic journey would be short-lived. The day after she broke the world record during the qualifying heats, she bombed, ranking 29th in the women’s 50-meter freestyle.

Haunted by her poor showing, Legler said it took her a decade to overcome the post-traumatic stress. “I didn’t talk about swimming for 10 years after I quit because I felt so ashamed about how I performed,” she said.

“Godspeed” has helped her come to grips with her stinging loss. “I wear my Olympic ring because there is nothing that is going to be as distressing as those dark nights of the soul,” she said, raising her right hand to reveal that she still wears her official gold band. “That I lived through it is nothing short of a miracle.” The memoir ends somewhat abruptly in 1998, after Legler leaves a rehab facility in Utah. That date is the first day of her now lifelong commitment to sobriety.

That wasn’t her only revelation from writing. Shortly after she completed “Godspeed,” she was diagnosed with autism spectrum disorder. Rereading her book, in which she alludes to her hypersensitivity to light and her social isolation, Legler realized that the disorder was hiding in plain sight.

Friends came to a similar realization. “I remember Casey telling me that some people from her publishers were perplexed by the way she wrote because there were no real characters and that everything was described through light, smell and sound,” said Michael Stipe, the singer and artist, who met Legler through his longtime partner, the photographer Thomas Dozol.

“I love the way her brain works,” Stipe said. “Any observation that she makes, you want to be able to see it the way she sees, and feel the way she feels.”

Back in the Water

Legler’s many lives after “Godspeed” are worthy of chapters themselves. She retired from swimming at 22 without a sense of purpose. “I had to learn how to participate in society,” she said.

After graduating from Smith College in 2007 (at the age of 30), her first job was bagging groceries at Fresh Fields Market in Washington, D.C. At 32, she moved to New York to become an artist.

While waiting tables at Westville in the East Village the following year, she met her wife, Siri May, a human rights expert and LGBT activist from Australia. For the couple’s City Hall wedding in 2015, Legler borrowed a Balenciaga suit from photographer Ryan McGinley.

Her entree into modeling was also by chance. Fashion photographer Cass Bird cast her in a photo shoot for Muse magazine in 2012, and Legler was signed to Ford a week after the images were published. She was 36.

After taking her last sip of espresso, Legler got up from the table and offered a tour of Roman & Williams Guild, the home décor showroom that houses the cafe. Examining a light blue plate that evoked the sea, she revealed that said she had not swum for nearly 20 years, until she took a dip in the Andrew “Boy” Charlton Pool, in Sydney five years ago.

“It took one of the most gorgeous pools in the world to get me back in the water,” Legler said. “Now I take the stairs like an old man going in very slowly because the icy cold of the water is still physically painful.”

Making her way to the main kitchen, she said her story of resilience has inspired others to get back in the water, too, so to speak. “People reach out to tell me, ‘You made space for me. You made me stick around,'” she said, revealing a big toothy grin.