A ‘Faustian Bargain’: Republicans May Wince, but the Payoffs From Trump Have Been Rich 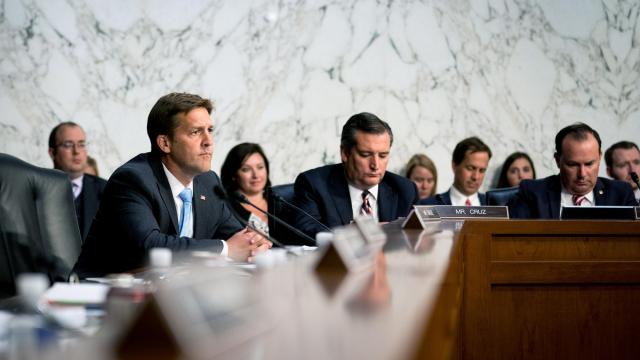 WASHINGTON — On one end of Pennsylvania Avenue this week, President Donald Trump and his closest advisers labored to beat back perceptions, fueled by an anonymous essay in The New York Times and a bruising new book by Bob Woodward, that he had all but lost control of the presidency from within. He lashed out anew at his attorney general, shouted “TREASON” and demanded investigations of his detractors.

But as he raged, Republicans in the Senate were pressing steadily through angry liberal protests and Democratic perjury traps toward perhaps the most lasting impact of the Trump era: a conservative shift in the balance of the Supreme Court capable of shaping the country for a generation.

The dueling images of a president on the edge and a conservative Congress soldiering forward explain succinctly why almost all elected Republicans here have quietly supported Trump through his travails — or at least not chastised him too loudly. The payoffs for what Sen. Jeff Flake, R-Ariz., called the party’s “Faustian bargain” have been rich and long awaited: deep cuts in corporate and personal tax rates, confirmation of a wave of conservative judges for the lower courts, and soon an ideological shift in the highest court of the land.

“Process and personality is what we are talking about — how they do things, how dysfunctional it is and how off the rails he can be,” said Sen. Lindsey Graham, R-S.C., conceding that Trump was “a handful.” But, he said, “what I am talking about is results.”

The president has proved largely disinterested in congressional pointers anyway. “A number of us have given the president some friendly advice, like on the Twitter account and the like,” said Sen. John Cornyn of Texas, the No. 2 Republican, adding, “We have tried to give him advice in that area, and he rejected it.”

So with additional policy victories in reach and Trump’s popularity among Republicans still sky high, many in the party have quietly elected to put their heads down and get done what they can, at least until November’s midterm elections.

Voters “have some fears and concerns, and we are trying to address all those issues,” Rep. Steve Stivers of Ohio, chairman of the House Republican campaign arm, acknowledged at a Christian Science Monitor breakfast with reporters Friday. But, he said, neither the dysfunction manifested by the anonymous essay nor Woodward’s book would make much of an impact on voters.

“I know that it becomes this tempest in Washington, but the rest of the country really is different, and they’re not talking about the same stuff that you might see on cable news,” he said.

The question keeps popping up, particularly among Democrats ever more alarmed by Trump’s disregard for the norms of governing: Where is the Republican breaking point? Trump sidled up to it a year ago when he praised the “very fine people on both sides” of the deadly white supremacist rally in Charlottesville, Virginia.

He tested the limits in Helsinki, when — standing shoulder to shoulder with Vladimir Putin — he sided with the Russian president’s assurances over his own intelligence community’s assessment that the Kremlin had interfered with the 2016 election.

He has pushed his party over and over with his firing of an FBI director, his attacks on Attorney General Jeff Sessions, his policy to separate migrant children from their parents, his threats to intervene in the investigations closing in on him and his unorthodox pardons.

Sen. Ben Sasse, R-Neb., lamented that the White House had become a “three-ring circus.” The anonymous piece in The Times this week was “similar to what so many of us hear from senior people around the White House, you know, three times a week,” he told the conservative radio host Hugh Hewitt on Thursday, adding, “You don’t run the country as a soap opera.”

After reading the anonymous essay depicting efforts within Trump’s own government to contain him, Sen. Bob Corker of Tennessee, the retiring Republican chairman of the Foreign Relations Committee, asked, “Who wouldn’t have written a letter like that?”

The president’s staunchest allies defend him without caveats. Rep. Mark Meadows, R-N.C., leader of the House Freedom Caucus, said he would explore potential legislative tools that could help identify the author of the essay.

Sen. Rand Paul, R-Ky., suggested that Trump could use a lie-detector test to ferret out the piece’s author. Others suggested that the essay would play in the president’s favor, proof of the entrenched “deep state” that he has claimed is undermining his presidency.

But after almost two years of being forced to answer for Trump’s relentless gyre of drama and just two months until Election Day, many rank-and-file Republicans say they have simply begun to tune the president out. Better to wait for Election Day and read the barometer of Trump’s support after voters go to the polls in what is shaping up as a referendum on his presidency.

If Democrats sweep into control of the House or even the Senate, Republican lawmakers would be freer to challenge Trump, lawmakers from both parties believe. In that situation, a damaging report from the special counsel, Robert Mueller, regarding Russia’s interference in the 2016 election or Trump’s attempts to interfere in the investigation could yield a bipartisan response. A stronger showing could all but ensure a strictly partisan one.

For now, though, Trump remains the single most popular figure in the Republican Party, whose fealty has helped buoy candidates in competitive Republican primaries and remains a hot commodity among general election candidates. Sen. Marco Rubio, R-Fla., worried aloud that the anonymous essay had set a dangerous new standard “for our republic.” But the Senate has government funding bills to pass by the end of the month, he said, and more business besides that.

“I’d prefer to be able to do all the work without all the drama, but I don’t think that’s realistic anymore,” he said, before disappearing into a black SUV leaving the Capitol on Thursday afternoon.

Even Trump’s most virulent Republican critics have managed something of a two-step, lacerating the president for his attacks on the justice system, on American alliances abroad and on his political enemies as they continue to vote with him.

On the first day of Judge Brett Kavanaugh’s confirmation hearings for the Supreme Court, Flake used his opening statement both to praise the nominee’s record and to excoriate Trump’s corrosive attacks on the rule of law.

But he never wavered in his support for Kavanaugh. He acknowledged liberal critics who say his words against Trump should be matched by votes against his policies and nominees. But he said that would not happen.

“Some will think if you oppose the president then you automatically buy into liberal philosophy. I don’t,” Flake said in an interview. “People will be disappointed if I support a judge that a decade ago would have gotten 98 votes.”