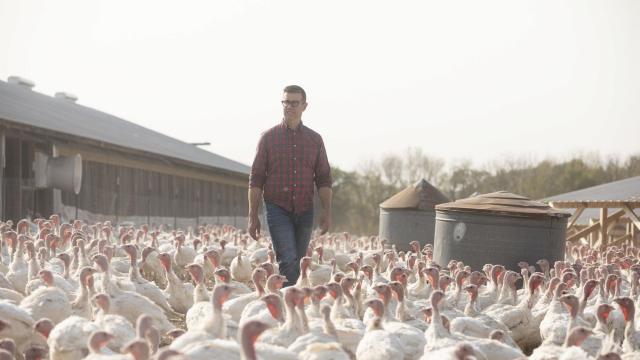 Cooks around the country are just starting to calculate menus and decide how many guests they can safely host for Thanksgiving. But for months, the people who grow and sell the centerpiece of the meal have been doing their own kind of turkey math.

Just how many whole turkeys will Americans cook this year for a holiday whose wings have been clipped by the pandemic?

“That’s the big question on the tip of everybody’s tongue,” said Stew Leonard Jr., who expects to sell 20% fewer big turkeys at the seven stores his family owns in the Northeast.

All indications are that the holiday gatherings that used to bring together dozens of people to share one or two turkeys will be scuttled in favor of smaller celebrations. That could lead to a run on small turkeys, a higher-than-usual demand for parts like whole breasts, and higher prices across the board. And although no turkey farmer likes to hear this, some cooks may simply decide to go all in on a big chicken.

Nearly 70% of Americans plan to celebrate Thanksgiving differently this year, according to a consumer survey released last month by the Chicago-based market research firm Numerator. The revised plans are motivated in no small part by new guidelines from the Centers for Disease Control and Prevention that recommend skipping holiday travel and limiting Thanksgiving celebrations to people living in the same household.

Consumer research from both Butterball and Hormel Foods, which together sell most of the more than 40 million whole turkeys that are eaten for Thanksgiving, suggests that big gatherings will be broken into several smaller ones, most of which will still center on turkey. One-third of the respondents to the Butterball survey said they were considering serving dinner outdoors, and the number of people who plan to host only their immediate family has jumped to 30%, from 18% last year.

Kroger executives are closely studying their own data, which show 43% of their shoppers will limit Thanksgiving to only the people already in their households.

“It’s really the size of the celebrations that has changed,” said Joel Brandenberger, president of the National Turkey Federation. “How that translates to the size of the bird people want is something we are a little less clear on.”

The calculations are tricky. Contracts to buy the baby turkeys called poults are often written a year in advance, and growing those poults to the proper size for the market takes months. Even if farmers wanted to raise smaller turkeys, it’s not that easy. Genetics, coupled with economically driven feed formulas, produce birds that mature at a predetermined size in a set amount of time.

“It’s not an industry in which you can quickly pivot,” said John Peterson, whose family has owned the 140-acre Ferndale Market in Cannon Falls, Minnesota, for 80 years. “For us to have any meaningful impact on changing anything for Thanksgiving, those decisions had to be made in March or April.”

Peterson is president of the turkey research and promotion council for Minnesota, the nation’s top turkey-producing state. About one-quarter of the 160,000 turkeys he will grow this year will be sold for the holidays. He is doing what he can to keep the turkeys small, like slaughtering some earlier than he might in a normal year. Cody Hopkins runs a livestock cooperative of 40 farms mostly in Arkansas, Mississippi and Missouri that will ship out about 3,000 broad-breasted whites — by far the most common American breed — that have been raised on pasture. He is making similar tweaks to his flock.

Because the cooperative sells directly to families and isn’t locked into a supermarket chain’s schedule, farmers have been able to move processing timelines in an attempt to produce smaller birds, he said. The co-op also is also planning to sell more turkey wings and breasts.

“We’re talking about doing some bigger chickens, too, to give people options,” Hopkins said.

The pivot is harder for the nation’s largest producers of whole turkeys, who are wrestling with both the health and the economic realities of COVID-19. The virus charged through some poultry packing plants at alarming rates, forcing temporary closings and a call for improved working conditions.

Beyond the whole-bird trade, the turkey business has been hurting. Although grocery store sales are up, coronavirus lockdowns have crushed the market for sliced turkey at sub shops, college cafeterias and catered events. In July, Butterball reported losing $27 million in the second quarter of year.

Still, the sellers of whole turkeys are optimistic. Leonard has increased his order for birds that weigh less than 16 pounds by 20%, and will add more individual turkey breasts to the mix. Instead of setting up most of his packaged Thanksgiving dinners for eight people, he is increasing the packages for four.

“We could actually see something of a run on turkeys,” said Mark Jordan, the executive director of Leap Market Analytics, in Arkansas, who studies the turkey market.

But that’s not a sure bet. With unemployment at record levels, many households have tighter budgets and will likely spend less this year on Thanksgiving, some research shows.

Waste, too, is top of mind. After seven months of taking their kitchens through the paces, many cooks are much more mindful of food waste. The thought of a whole turkey for only a few guests might not make sense, said Dasha Shor, a registered dietitian and food analyst who specializes in meat and meat alternatives for Mintel, a global market research company.

“There is almost this perfect storm for the whole bird,” she said. “The silver lining is that people are actually interested in cooking. Almost half of consumers want to cook at home, and get better at it.”

As a result, she predicted, more people than ever before will be trying to replicate the Thanksgiving dinner they grew up eating.

“I can see more young consumers for the first time in their lives hosting a small Thanksgiving at home, and trying to roast their first turkey,” she said. The marketing team at Jennie-O, based in Minnesota, are preparing for a flood of first-time turkey cooks by promoting a whole turkey specifically processed to go straight from the freezer to the oven. They’ve also designed a media campaign based on smaller gatherings where less turkey will be consumed.

“Our messaging needs to be that no matter what size bird you get, there are great leftover recipes,” said Nicole Behne, vice president of marketing for the brand.

Leftover recipes and food storage tips will be a bigger focus this year at Butterball, where research indicates that only a quarter of all consumers plan to buy smaller turkeys than usual. At its Turkey Talk-Line, which opens Nov. 2, experts are gearing up to answer what is expected to be a flood of calls from novice hosts. (For the first time in its 39-year history, the talk-line experts will be taking calls remotely rather than from the Butterball call center and test kitchen in an office near Chicago.)

Still, no one can really foretell what the American appetite for whole turkeys will be this year, or whether the desire to be together with the people who always come to Thanksgiving will outweigh concerns about COVID.

The uncertainty is not unlike the upcoming presidential election, said Shor, the analyst from Mintel. “I’m on pins and needles about both.”