'A difficult place, a time of opportunity:' UNC-CH dealing with exodus of top leaders 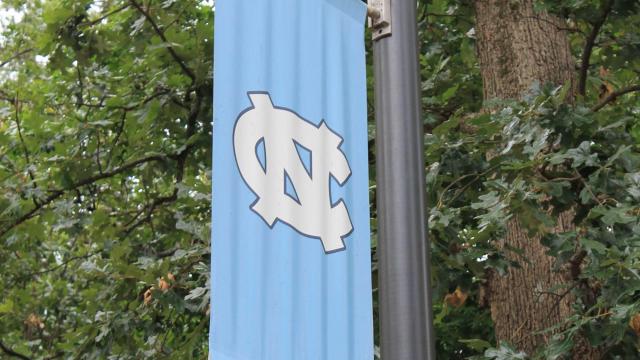 Outside Terry Rhodes’ office in South Building at UNC-Chapel Hill, students in Carolina blue robes take graduation photos with the university seal that reads “Lux Libertas” on the ground in front of them: Light and Liberty.

To Rhodes, dean of the College of Arts & Sciences, the scene represents the joy and progress students have made during their time at the university.

Now it’s Rhodes’ turn. After 25 years on the faculty and nine years in senior leadership, she’s retiring in June.

And she’s not alone.

Including Rhodes, nine top leaders have announced their retirement or departure from the university since last May, including Bob Blouin, executive vice chancellor and provost, a position only second to the chancellor.

Five of the departures are deans of prominent schools:

In addition to Blouin, three others are top ranking staff members:

The exodus comes as questions of transparency, academic freedom and political influence engulf UNC, causing concern among many about its future as North Carolina’s flagship public university.

“I have been in the middle of so many of our challenges here at Carolina,” Rhodes said. “And I will say, I do very much feel that this university has to face its past realistically — not paint-brush over it.” 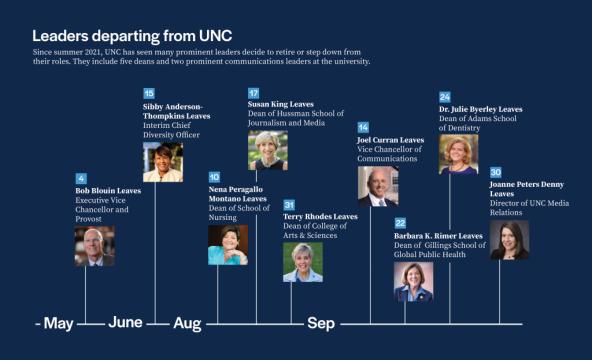 Holden Thorp, who served as UNC’s chancellor from 2008 to 2013, has a rule of thumb for leadership change: when there’s a new executive, half the team turns over, either because they had intentions of retiring or have been exhausted by controversy.

“People tend to get very, very worn down when that happens, in a way that has nothing to do with them doing anything wrong or anything else,” Thorp said. “It’s just exhausting to be in the blender for months on end. And some people just say, ‘OK, I don’t want to do this anymore.’”

Many of those who have left UNC directed Media Hub to their departure announcements or did not respond to an interview request, including Blouin.

Curran and Peters Denny both said they’d received other job opportunities that led them to leave the university. For others, it was their intended time of retirement.

Rhodes’ move to the deanship paralleled other leadership changes that followed controversy surrounding the administration’s handling of the Confederate monument Silent Sam, which was toppled by demonstrators at the start of the fall 2018 semester.

During a closed meeting in 2019, the day after then-Chancellor Carol Folt’s unexpected announcement of both her retirement and an order to remove the pedestal of the Silent Sam monument, the Board of Governors accepted her resignation — and moved up her termination to Jan. 31.

That forced a domino effect within university leadership.

Since then, Guskiewicz and Rhodes — whose titles became permanent — and the university’s administration have dealt with continued controversy and questions surrounding UNC’s handling of Silent Sam.

More recently, university leadership has been plagued by two crises that made national headlines: a failed reopening during the coronavirus pandemic and halting decision to grant tenure to Pulitzer Prize-winning journalist Nikole Hannah-Jones.

In her 34 years at the university, Rhodes said she’s developed trust and relationships with many people. But even so, the hardest moments as dean have come as she’s noticed the community’s lack of trust in leadership.

“That has been painful sometimes, to think that either I’m not communicating enough or not doing enough or maybe my ideas do not converge with others in terms of certain decision-making,” Rhodes said.

But conflicting opinions and the absence of trust are not new to UNC-Chapel Hill.

This year marks the 10th anniversary of one of the biggest scandals at the university — academic dishonesty as UNC athletes were directed toward paper classes for nearly two decades.

In 2011, Thorp, now the Science Family of Journals editor-in-chief, was doing what he called “threading the needle” — trying to find a balance and compromise between groups of opinions that often cannot coexist.

But, Thorp said, it was “ridiculous” for him to think that it would have been possible to bring those groups together.

“We all think that we’re going to find the magic words and have the magic meeting that’s going to bring resolution to these things instead of saying, ‘You know what, this is intractable,’” he said.

Thorp resigned from the chancellor position in 2013. He said the political elements during that scandal were secondary — but now, the controversies at UNC are “overtly about the politics.”

Since the tail-end of the academic-athletic scandal in 2011, the Republican Party has controlled the North Carolina state legislature. The legislature has considerable influence in electing members of the UNC System’s governing bodies.

The Board of Governors, which has 24-voting members who oversee all UNC System institutions and elect the System’s president, is elected entirely by the General Assembly.

The Board of Trustees advise both the BOG and the UNC chancellor. Of its 13 members, eight are elected by the BOG and four are appointed by the legislature. The 13th member is UNC’s student body president, who is a non-voting member.

From Silent Sam to the Nikole Hannah-Jones’ tenure case, the campus community and UNC System governance members have often disagreed on the university’s decisions.

“Kevin tried to thread that needle,” Thorp said. “He got himself in the same old spot that Carol and I were in.”

Talks of Guskiewicz potentially being ousted began this summer when Mimi Chapman, chairperson of the faculty, called an emergency meeting to discuss concerns that the chancellor would be removed by the BOG.

Chapman said she’d heard from an anonymous source that names were being floated as options for interim chancellor, including Clayton Somers, vice chancellor for public affairs and secretary of the university, and John Hood, president of the conservative Pope Foundation.

These would be political appointments, Chapman said at the meeting, and “at best, controversial choices.”

For current leaders at UNC, she said despite the opportunities the university offers, it’s also been a challenge to have “crisis after crisis happen.”

“Just surmising, if you were nearing retirement anyway, and you were thinking, ‘Should I stay on for another two or three years or should I go ahead and retire?” Chapman said. “Certainly, the level of what is demanded and what has been demanded of senior leadership positions might push you to say ‘I think I’m ready to go ahead and call it a day.’”

Particularly over the past few months, UNC community members raised questions about the political affiliations of BOT members, and the power Republican leaders have in appointing them.

But newly appointed BOT member Marty Kotis III, who formerly served on the Board of Governors, said a focus on politics draws attention away from the school’s progress.

“The drama sometimes feels like someone searching for a Kardashian show out there that may not exist,” Kotis said.

This potential change, coupled with the current turnover, raises questions about UNC’s recruitment processes for senior leadership, Chapman said, and puts the university at risk of being a less competitive option for candidates seeking top roles.

Looking forward, Thorp said UNC’s leaders need to get to a point where they can handle disagreement in a transparent way.

“Yeah, some of them may lose their job when they do that,” he said. “If I’d walked out on the steps of South Building and said, ‘Guess what everybody, we cheated at sports for 30 years. I’m really sorry,’ I very well could have lost my job 10 minutes later.

“But I had to leave anyway.”

Like Rhodes, who’d known she wanted to retire when she turned 66 in June 2022, Hussman School Dean Susan King always intended to be in the position for no more than 10 years, a span that ends in January.

But her departure comes after a summer where UNC, again, made national headlines when it delayed granting tenure to Hannah-Jones.

Dean of UNC-Chapel Hill journalism school to step down

On May 30, it was revealed that the journalism school’s namesake, Arkansas newspaper-magnate Walter Hussman, had expressed concerns in December 2020 about hiring Hannah-Jones, according to reporting from The Assembly.

While Hussman worried about “the controversy of tying the UNC journalism school to the 1619 project,” students, faculty and community members worried that Hussman’s interference and the BOT’s actions were reflective of the issues of structural racism, donor influence and chilled speech.

King called the fight for tenure and eventual result a “difficult time” and a “disappointment,” as she had hoped to bring someone of Hannah-Jones’ caliber onto the faculty — and she’d wanted to bring Hannah-Jones in specifically — but was surprised by the BOT’s reaction.

Over the summer, several Black, Indigenous and faculty of color, including interim Chief Diversity Officer Sibby Anderson-Thompkins, decided to leave the university. They cited Hannah-Jones’ initial tenure denial as one more in a long line of harmful decisions and glaring inequity at UNC.

“For me, the decision to leave really came to a head with the whole Nikole Hannah-Jones tenure case,” Anderson-Thompkins said in a June interview with WRAL. “We have espoused this strong value of community and belonging and standing against racial inequity, and yet, we are still making decisions that are very inconsistent with what we say are our values.”

As King is set to step down from her role as dean, she said whoever assumes the post next should be cognizant of the hurt the community is feeling.

“We need a leader who sees the opportunities, but is aware that there’s been trauma by the school, that people were upset it was a long saga over Nikole and then she decided not to come,” King said. “And some of our, particularly our faculty of color, are really disappointed in that, and so there’s healing that needs to be done as well.”

Though some leaders predetermined their departure and others received offers from different institutions that they chose instead, King and Rhodes emphasized the time of change UNC is in — and the work left to be done.

“We are in a difficult place, I think,” Rhodes said. “But I also think it’s a time of opportunity.”

Story by Praveena Somasundaram / Graphics by Kendal Orrantia. Both are students in the University of North Carolina at Chapel Hill Media Hub. Under the direction of John Robinson, Stembler Professional in Residence, students from various concentrations in the UNC Hussman School of Journalism and Media work together to find, produce and market stories with state, regional, and at times, national appeal.


Copyright 2021 The University of North Carolina at Chapel Hill. All rights reserved.