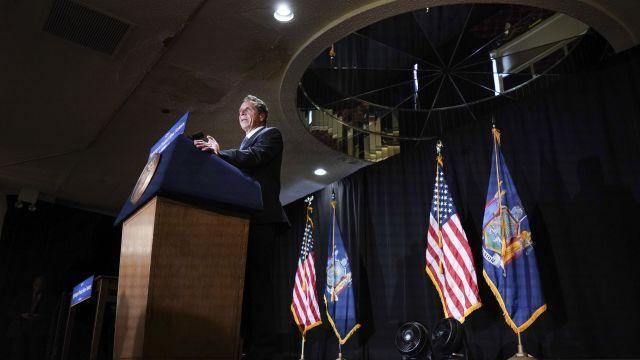 ALBANY, N.Y. — In January 2016, as New York Gov. Andrew Cuomo was preparing his annual State of the State address, some high-placed state officials knew they had a problem.

A pair of business executives — partners in multimillion-dollar, private-public partnership deals with the state — were on their way to Albany, anticipating that Cuomo was going to announce their projects in his speech. But Cuomo had decided against doing so, worrying the executives.

“We need to assure these guys their deals are solid,” Christopher Walsh, an associate vice president at the State University of New York Polytechnic Institute, wrote in an email to several top Cuomo administration officials. “We cannot string these guys along any longer. Please.”

One person in that email chain was not a government official, but rather a high-profile lobbyist by the name of Todd R. Howe, a former aide of Cuomo’s who was said to still have the administration’s ear. Indeed, Howe made the problem go away, suggesting that the executives be given access to a reception at the Executive Mansion, where the governor was staying that week.

“Could we get the two C.E.O.s invited to the mansion?” Howe wrote in an email to Jim Malatras, then the director of state operations, one of the top positions in state government. “Given we asked them to travel in to attend.”

Two minutes later, Malatras said “O.K.,” and instructed his deputy to set up the visit.

Cuomo, a Democrat seeking a third term in November, has repeatedly downplayed his relationship with Howe, who became a key figure in a pair of federal corruption cases after pleading guilty and reaching a cooperation deal with prosecutors.

Howe’s cooperation in those cases helped convict two other former top aides: Joseph Percoco, once one of the governor’s closest friends and trusted advisers, and Alain E. Kaloyeros, the economic guru who the governor praised as a genius and “New York’s secret weapon.”

But in nearly 350 pages of emails obtained by The New York Times as part of a state Freedom of Information Law request, it was clear that Howe had entree to the top levels of Cuomo’s administration — a period that included the years and months leading up to the news of the federal investigation.

The Cuomo administration had fought against releasing the emails for two years, spending more than $200,000 to hire outside counsel — Greenberg Traurig, a loyal Cuomo campaign donor — after The Times went to court seeking the documents. A state judge last year ruled against the administration and ordered that the documents be released; the state appealed the ruling, but subsequently agreed to a settlement that allowed for the emails’ release.

The emails showed how Howe used his access to gain help for clients.

In December 2014, for instance, Howe sent an urgent email to Malatras and Andrew Kennedy, his deputy, pleading with the two officials to look into millions of dollars of payments owed to two upstate development companies — COR Development and LPCiminelli — that ended up at the center of the federal corruption cases.

“Both need some payment as a sign of good faith before the close of business tomorrow,” Howe wrote. Less than an hour later, an official with Empire State Development, Cuomo’s leading economic development agency, confirmed that the agency was approving the Ciminelli payment.

“So they should have a check no later than tomorrow,” the official, Peter Cutler, wrote back to Howe. “But could be before.”

The emails show Howe communicating with several top officials — including Robert Duffy, the lieutenant governor at the time — through their personal email accounts, a breach of a state policy prohibiting official business being done using private email, which are not subject to FOIL requests.

The use of such emails were also highlighted during the trials of Percoco and Kaloyeros.

“It was almost sport in New York state government — I don’t believe this is limited to the Cuomo administration — to put things on your private email so that the reporters can’t get them,” Reid H. Weingarten, a lawyer for Kaloyeros, told jurors in June.

Percoco and Kaloyeros each worked with Howe on aspects of the Buffalo Billion, the governor’s signature upstate economic development program, the biggest project of which — a $750 million solar plant in Buffalo — was found to have been bid-rigged in favor of LPCiminelli, which has given generously to Cuomo’s campaigns.

In trial testimony, witnesses said that Kaloyeros had hired Howe to help safeguard his position at State University of New York Polytechnic and that he acted as the eyes and ears of the administration inside of the university.

The governor has not been accused of any wrongdoing and prosecutors have said the donations were legal. The governor’s office has described Howe as “a felon, liar and discredited manipulator,” accusing him of “making up stories invoking both Mario and Andrew Cuomo to make himself seem more important.” It also said that Howe, who had pleaded guilty to eight felonies in a cooperation deal, was unreliable.

That much seemed evident in the Percoco trial, where Howe was a government witness.

But his star turn took an unusual detour when he was forced to admit that he lied to the government about a credit-card bill, violating the terms of his deal with prosecutors. He was then rearrested during his time on the stand and had been kept in jail until Aug. 2, when he was freed on bail. He still faces sentencing.

“Todd Howe was hired by SUNY Poly and others to represent them and that is what is reflected in this correspondence,” said Richard Azzopardi, a spokesman for the governor. “However, what wasn’t known then that is known now is that he is a criminal, an admitted liar and a con man who by his own admission made up stories involving the governor and his father — including doctoring emails to his friends and clients — to make himself appear relevant.”

Still, Howe’s proximity to the inner workings of the state government was repeatedly evident in the emails.

In late 2014, a member of the SUNY board of trustees, Henrik N. Dullea, sent an email to Malatras, noting his displeasure that the SUNY chancellor at the time, Nancy L. Zimpher, was not given a raise nor a vote of confidence from the board of trustees. “I believe our board and the executive chamber have treated her shabbily,” he wrote. In a follow-up email, he added, “I understand both optics and elections, but this should not have happened the way it did.”

The emails somehow made their way to Howe, who wrote to Malatras that Dullea’s comments were “very disrespectful.”

“Taking multiple shots at the chamber as he did in this last email is unacceptable,” Howe wrote. “I think you should have him in for a respectful but stern conversation to explain that ‘the governor and you expect him to carry the chamber’s water, and if he can’t do that day to day, he should rethink his commitment, and you’ll work with him to find a diplomatic way to move off the board.'”

Zimpher retired from her post last year; Dullea is no longer on the board of trustees. Concern for the governor’s image and reputation is common in the emails. In another chain in August 2015, Malatras warned that a dispute with officials at the University of Rochester about the location of a manufacturing hub was tarnishing its rollout, which could reflect poorly on Cuomo.

“I will not have him embarrassed with this,” Malatras wrote, referring to the governor. “Contrary to everyone involved, this is his project.”

Cuomo’s specter looms in other emails, including one in January 2015 in which Howe urges Richard Socarides, a member of the SUNY board of trustees, to approve Kaloyeros’ selection as the founding president of SUNY Polytechnic. “Optics are everything in this business and the cynical members of the press are waiting to drive a wedge, as always,” Howe wrote. “Your support sends a strong message of confidence in both the governor and Dr. K.”

In another, from Sept. 16, 2014, after the governor announced $55 million in grants in Syracuse, emails indicate that Howe spoke to Cuomo about Riverbend, the $750 million Buffalo Billion project that broke ground a week later and later became ensnarled in the Kaloyeros corruption case.

Howe wanted to relay to Malatras his conversation with the governor about Riverbend. “All good!” he wrote.

In another chain, involving Kaloyeros’ efforts to get a bigger salary than the SUNY chancellor, Zimpher, Howe told Malatras to “get some family time.”