Morehead City, N.C. — Life is never normal after a hurricane. It becomes a new normal, and it takes some getting used to. But the Carteret Community Theater in Morehead City is trying to make things as normal as possible. Their first stage production since the storm opens in just a couple of weeks, even though their building sustained significant damage.

The production company honors the show business adage, "The show must go on."

“Well, it's about telling stories,” director Phil Routszong said during a recent rehearsal. “Stories are full of hope, stories bring inspiration, to carry on, through disaster and through difficulty.”

Disaster and difficulty hit the Carteret Community Theater the day Hurricane Florence came calling. The roof was ripped off, and rain saturated everything inside of the building. A temporary roof now keeps most of the elements out.

Carolyn Evans is the president of the Carteret Community Theater. Standing in the darkened shell of the building, she points out the obvious. “There is no electricity in this part of the building.”

In fact, there's not much of anything in the building. 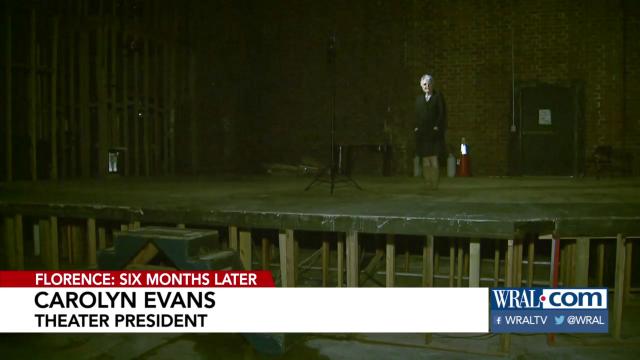 “But it did used to have over 500 seats here,” Evans said. That was before the salvage crews came though to clean up the mess.

The theater organization has been around since the 1940s. They just bought the building in 2014.

“This was just devastating, it was heart breaking.” Evans said.

She points out all is not lost. “The theater is not only a building, it's a group of individuals who love what the theater produces,” she said.

Love of the theater is strong in this community. That's why actors, stage hands and others are rehearsing for their first stage performance since the storm. The group has borrowed space to work and Carteret Community College will loan them a stage.

Sofie Dixon is one of the cast members getting ready for the show. She is 13, in the 8th grade, and lost everything she had when Florence ripped through her bedroom ceiling. Sofie and most of her family had fled the storm. Her dad stayed behind and then sent them pictures of the damage.

“My mom looked at the pictures first, and her tears were welling up, and she said there are pictures of your room,” Sofie recalled before a recent rehearsal. "It didn't even look like my room.”

Dixon vividly remembers looking at those pictures. “It was very very hard to deal with, but, I sucked it up. I said, 'I'm not going to cry.' It happened, but we just have to move on.”

She has moved on, on to the stage, where the lights will not be the only thing shining on opening night. 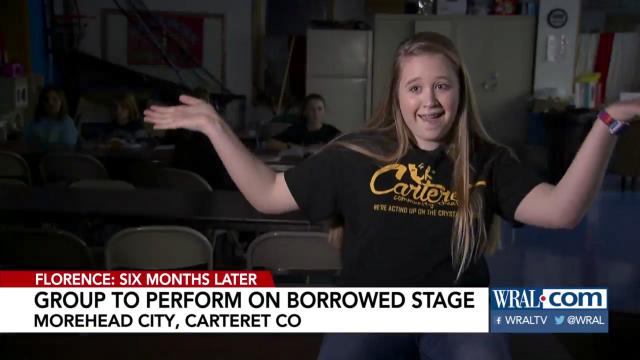 The production is "The Lion King Jr," a play director Routszong believes is appropriate,

“Just like Simba, we can run away from our problems, stick our head in the sand and pretend like nothing is going on, or we can come together and realize we all have a lot of work to do.”