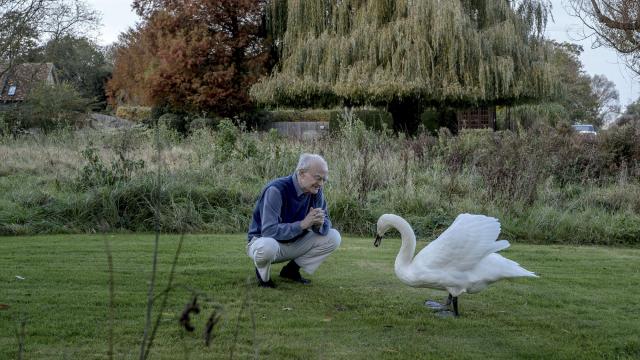 HEMINGFORD ABBOTS, England — It is the sort of English village that you might find on Christmas cards: a medieval church, a placid river, thatched cottages, swans. So it’s no great surprise that it is also where you can find John Rutter, a composer so identified with Christmas that he has all but earned a place with the kings and shepherds by the manger.

He lives here in a manor house, where he composes carols that are sung throughout the English-speaking world: It’s almost inconceivable these days for a carol concert not to feature at least one of Rutter’s modern classics. But it sometimes bothers him that their ubiquity devalues what he writes for other times of the year.

“I used to think that was a problem,” Rutter said, surveying from his kitchen window the absurdly perfect village he calls “idyllic, if a bit Miss Marple.” He worried that people wouldn’t take his other music seriously. “But I’m not unhappy to be associated with Christmas: better than famine, flood or war,” he said.

“And I think now of the carols as shortcuts into a listener’s musical universe. So when people come up and say, ‘You’re the guy who wrote “What Sweeter Music” or the “Shepherd’s Pipe Carol,"’ that’s fine,” he continued, referring to two of his Christmas standards. “Hopefully, they’ll get to know I’ve written other things, as well.”

That his “Requiem” was used at memorial services in New York after the Sept. 11 attacks indicates his status there. But then, the “Requiem” was also selected for the funeral of former Chancellor Helmut Kohl of Germany in July. There is a choir in Tokyo, the JR Singers, dedicated to his output.

Nearly all of Rutter’s works are for choirs and rooted in the choral practice of the Church of England, which has featured in his life since childhood. Born in 1945, he attended Highgate School in London, an institution with an impressive musical tradition. (One of his contemporaries there, John Tavener, also became a star of choral repertoire.) The Highgate School choir sang on illustrious recordings like the original Benjamin Britten “War Requiem,” from 1963, which features the young Rutter as an alto, though you wouldn’t notice him.

Rutter went on to study at Clare College, Cambridge, where he became director of music during the 1970s, and he has been happy to oblige whenever Clare’s respected choir needed something new to sing. But it was as an undergraduate in the 1960s that the course of his life was fixed.

He was conducting a Christmas concert with some of his music on the bill, including a relentlessly cheerful number, the now-famous “Shepherd’s Pipe Carol,” that he wrote when he was 18. Days later, David Willcocks, who directed the chapel choir of King’s College nearby, requested the manuscript. Willcocks was the most important figure in English choral music at the time, and, liking what he saw, he made some calls on Rutter’s behalf.

Before Rutter’s student days were up, the carol was published and recorded by EMI.

“By the standards of Mendelssohn, I was hardly a prodigy,” Rutter said, “but I’d made the transition from aspiring composer to functioning one.” He continued: “And all thanks to David Willcocks, who was a great enabler. If he liked you, he didn’t just say nice things — he did them.”

Willcocks also invited Rutter to join him as co-editor of the influential “Carols for Choirs” anthologies that still largely determine what is sung at this time of year in churches worldwide.

At the same time, Rutter was expanding his horizons, working as a contract composer (he helped William Walton revise his opera “Troilus and Cressida”) and ramping up the scale of his own writing. He also set up his own choir, the Cambridge Singers, who for more than 30 years have been recording Rutter’s output for his CD label, Collegium Records. He is a one-man industry, and though he comes across as kind, genial and scholarly, his success is underpinned by a smart business sense.

Not everybody likes his work, which tends toward a tuneful, easy-listening accessibility that robs him of a place in the pantheon of serious composers. When I mentioned his name to the modernist composer and conductor Pierre Boulez in an interview several years ago, the response was nothing but a snort. But perhaps that’s a natural hazard of composing choral music.

“When you write for choirs, you’re writing, generally, for amateurs,” Rutter said. “So a certain simplicity is needed, and I embrace that gladly. Especially in the Christmas music, which is for an inclusive festival where you leave your fancy good taste at the door if you want to get anything out of it.” Another common criticism of Rutter’s work is that it is derivative, declaring without shame its sources — mostly Britten, Walton, Fauré, but with a touch of Broadway.

“You can add Ravel to that,” said Rutter, who can be disarmingly robust in self-analysis. “I’ve never knowingly pinched anything from anybody, but composers tend to be either explorers or magpies, and I’m the latter. I’m not out to break new ground. My gift, if I have one, is to take what’s in the air and use it.”

What few can deny is that, at its best — in classics like “What Sweeter Music,” which thousands of choirs will sing this holiday season — his writing is immaculately crafted, with a gift for melody that most composers would kill for. And his music touches people’s lives in ways that most contemporary classical music never will.

“The privilege of writing my sort of music is that people choose it for the days they remember,” he said. “They say ‘We had you at our wedding, our son’s baptism, our dad’s last carol service.’ It’s like being their guest. And my response is always ‘Thank you for inviting me.'”

But what these people probably don’t realize is that, as steeped in Christianity as Rutter’s music may be, his personal beliefs are, in his own word, “nebulous.”

“I love the Church of England,” Rutter said. “When I set a sacred text, I enter it with all my heart. But I’m more a supporter than a specific believer. I have a problem signing on dotted lines.”

As for the church that stands beside his house in Hemingford Abbots, he loves it, but doesn’t often go inside. “I know they do my music, though, because my wife sings in the choir,” he said. “Poor thing: There’s no escape.”