A chef couldn't afford his dream to feed the hungry. Then he won the lottery 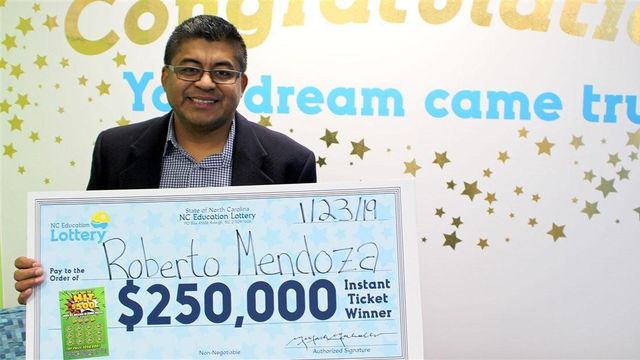 CNN — The lottery ticket was an impulse buy for Chef Roberto Mendoza. He has cooked for three US presidents and the Tennessee Titans. He knows his way around the fanciest kitchens. But when that scratch off ticket turned out to be worth $250,000, Mendoza reacted with joy like a kid.

"I hit my friend I couldn't believe it." But then he had another thought.

"This is not my money," Mendoza told CNN. It's money meant for something big real big.

Mendoza was born in El Salvador. A war was raging, food was scarce. "When I was 14 or 15 years old, I went to bed without eating.

I said 'God, When I grow up, I do not want to feel hunger.'" But the war got worse for Mendoza. He was kidnapped. The chef doesn't give many details from there. But upon his release, the Salvation Army brought him to Canada. He eventually ended up in California, working at an Israeli delicatessen.

While cutting onions and boiling matzo balls, he found his passion. "When I have a pan and a pot in my hand it transforms me."

After the deli, Mendoza got a job at a hotel kitchen. He went to culinary school and later became a chef at the Beverly Hills Hotel. As his career flourished he cooked for those three presidents, a Saudi prince and the Tennessee Titans football team among others.

But it wasn't the caliber of people he was feeding that was about to change his life. it was the quantity.

By 2012 he moved to Charlotte, North Carolina.

"I was doing meals for a NASCAR event in Charlotte, North Carolina. There, we fed more than 400,000 people in one week. When I saw that much food, I remembered that prayer from when I was little," Mendoza said. "God made me a chef because I suffered too much hunger in El Salvador."

After seeing the vast amounts of food at the auto race, Mendoza drummed up support and contributions from around North Carolina and roasted 600 holiday turkeys for Charlotte's homeless. A woman volunteering at the turkey roast marveled at the volume of food - much like Mendoza did at the NASCAR event. Then she mentioned a Dominican Republic town.

"She said 'I wish I could do this for the kids in Bayaguana.'" The comment resonated with the chef's own childhood hunger. He was moved.

"I went to visit and I saw the poor village."

In 2013, the chef got a $10,000 tax refund. His reaction was the same as when he won the lottery: "This can't be my money." It was. Remembering the trip he had taken to the Dominican Republic town a few months earlier, he used his tax refund to buy land in Bayaguana for a cafeteria.

He dreamed of a facility that could regularly feed the area's poor. But the funds just weren't there to complete construction -- until he scratched off a lottery ticket in North Carolina.

Even after taxes came out, $250,000 was a lot to win. But when you're building a cafeteria and keeping it stocked, it goes quickly. Mendoza knows there is still work to be done, and more funds to be raised.

In the meantime, the chef keeps feeding people. From high-end catering at Charlotte's finest events to weekly dinners he regularly prepares for the city's homeless, he relishes the universal sounds of people dining, and knows too well what hunger sounds like.

"When you are hungry, there is no language, just your stomach growling."