A Challenge for a Romney Who Is Loyal to Trump 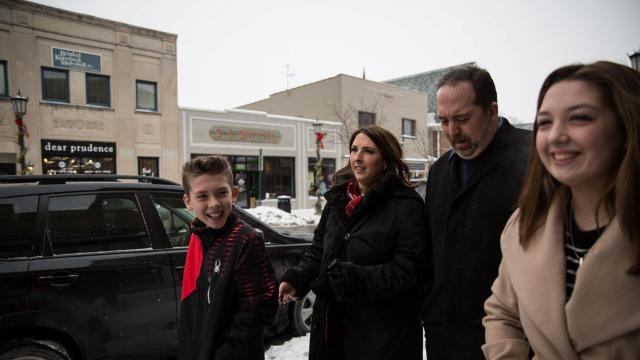 NORTHVILLE, Mich. — She is the very profile of the voter President Donald Trump tends to repel: a soft-spoken, college-educated mother of two who lives in an upscale suburb in one of the most contested battleground states.

This was not lost on Trump when he picked Ronna McDaniel to be the chairwoman of the Republican National Committee. Neither was the fact that her father is Mitt Romney’s oldest brother, and that bringing her into the fold would put an exclamation point on his sublimation of the establishment wing of the party.

McDaniel, who is 44 and only the second woman to lead the national committee, now faces a challenge that is as personal as it is political. She has to fortify her party in a hostile election environment as it tries to keep control of the House, the Senate and 13 governorships where incumbent Republicans are leaving. That job has been complicated by a wave of retirements by disaffected Republicans, putting more seats at risk in districts like her own in Michigan.

Then there is the fault line running right through her family.

Her uncle, who has been one of Trump’s most unflinching critics, is likely to run for the Senate in Utah. His re-emergence on the national stage threatens to set off new quarrels in the party over questions of loyalty to the president.

McDaniel has tried to leave little doubt about where her loyalty lies. She even stopped using her full name — Ronna Romney McDaniel — professionally after the president joked with her and her husband about dropping her given surname.

“You know the job you’re signing up for,” she said in an interview one recent morning at a diner near her home, referring obliquely to the fact that committee leaders typically have to toe the president’s line when their party holds the White House.

And she has indeed been highly deferential. She fell in line after Trump insisted last month that the Republican National Committee put resources back into the Senate race in Alabama to aid Roy Moore, who had been accused of preying on girls as young as 14.

Alabama rejected Moore and elected a Democrat to the Senate for the first time in a generation. But even now, McDaniel will not say whether she believes the committee’s move was a mistake. “I understand why the president did what he did,” she said. “He wants to keep that majority.”

She stressed that disputes in the party were an unwanted distraction. “If you’re spending more time attacking your fellow Republicans, you’re not helping us win in November,” she said. “I would prefer,” she added, “that we don’t always air those differences. I used to say if you have a fight within your family, you don’t go on ‘Jerry Springer.'”

So far, McDaniel has managed to hold together the factions of the party that are split over their feelings about Trump but united, for now, in pursuit of conservative policy goals. A relentless fundraiser who spends up to six hours a day on the phone wringing money from donors, she has helped put the party in a formidable financial position. The Republican National Committee has nearly $40 million in the bank, compared with the Democratic National Committee’s $6.3 million.

“It’s not been easy for her for a lot of reasons,” said Ron Kaufman, who represents Massachusetts on the Republican National Committee. “The good news is Ronna understands totally the downside of where we are, as well as the upside. And she understands that our job is to make whatever potential wave there is a ripple.”

That “she’s raised a ton of dough” only helps her position in the party and with the president, he added.

She has a close relationship with the president that is perhaps unlikely for a Mormon from suburban Detroit. She has delivered something Trump intuitively understands: quantifiable results. Not only has she raked in money, but his narrow victory in her home state also helped put him over the top in the Electoral College. “She won,” he has told people. He has also been known to refer to her as “my Romney.”

“The president has a pretty sterile view of results,” said Reince Priebus, the former White House chief of staff and party chairman who pushed Trump to pick McDaniel as his successor. “And if the results are the money is being raised and the apparatus is running well, the president is going to be pretty happy.”

Politics being in her blood, McDaniel worked her way up through various positions in the Michigan Republican Party before being elected as the state chairwoman in 2015.

McDaniel remained neutral throughout the 2016 primary races even as her uncle spoke out against Trump, denouncing him as “a phony, a fraud.” And when it became apparent that Trump would probably be the nominee, she enthusiastically embraced his campaign.

As for her own surname, she insisted that the president had never asked her to drop it outright. He raised the issue, she said, only lightheartedly, in front of her husband. And she said she liked the brevity of her name without it. “My husband and the president joked about it,” she said. “My husband likes it, too.” Republicans said that she appeared to have accepted the reality that party committee leaders in her position are generally not afforded much leeway, and that under Trump that seemed especially true.

“You’re not the party’s chairman, you’re the president’s chairman,” said Saul Anuzis, a former chairman of the Michigan Republican Party. “As a Romney, she accepted the role of being a Trump person. And if she is going to do a good job, then she’s going to have to be a Trump person.”

Trump has often given McDaniel credit for telling him he could win Michigan — a prediction that few Republicans or Democrats were willing to make.

“I told Ronna for two years this state was competitive, and she listened to me much more than Democrats did,” said Rep. Debbie Dingell, D-Mich., who is old friends with McDaniel’s family. “I was in union halls talking to people who were scared about trade, who were scared about their pensions. And she was hearing it, too,” Dingell added.

“I get it,” McDaniel said. “I was at the ground level when the movement came through my state.”

As she looks to her backyard now, a movement of a very different kind seems to be building. But this time, it is her job to stop it. McDaniel’s own congressman, Rep. Dave Trott, has announced that he is joining the wave of Republicans who will retire.

Analysts have since moved the district from likely Republican to tossup.