A bond market freakout could derail the rally in stocks 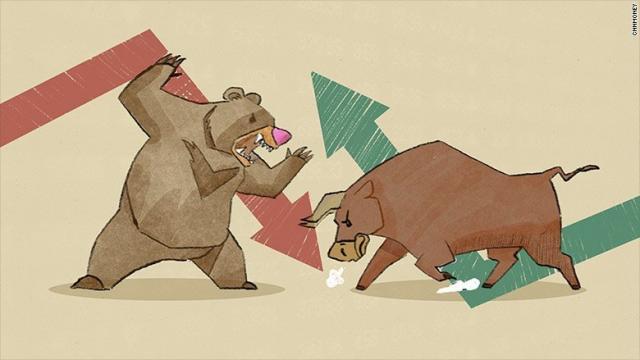 All that easy money has fanned the flames by keeping borrowing costs low and forcing investors to take a gamble on risky stocks because bonds hardly make any money.

But what if the recipe of steady economic growth and extremely low rates suddenly changed? A rapid spike in interest rates could disrupt or even derail the relentless run on Wall Street.

Investors were dealt a fresh reminder of the market's addiction to ultra-low rates this week as the 10-year Treasury yield jumped to 2.44%, the highest since March. The closely watched Treasury rate, which moves opposite the price, is up dramatically from 2.27% on October 16.

The selloff in bonds has been driven in part by expectations for faster growth and concerns that President Trump's choice to lead the Federal Reserve will raise interest rates more aggressively than Janet Yellen would. Some also worry that Trump's proposed tax overhaul could overheat the economy.

The sudden move in rates led star bond investor Jeff Gundlach to warn on Twitter that "obituaries need to be written" for the 30-year bull market in bonds if the momentum doesn't reverse soon. "The moment of truth has arrived," the billionaire said.

"But if rates climb at this accelerated pace, that could potentially hinder this recovery. Well above 3% or closer to 4% would definitely be alarming," LaBella said.

Of course, it's way too early to say the great bull market in bonds is done. And steadily rising interest rates aren't a bad thing. If anything, investors alarmed by how long rates have remained extremely low would welcome a return to normalcy. As would those who own shares of banks, which have struggled to make money in the low-rate environment.

"The economy can absorb slowly rising interest rates," said Art Hogan, chief equity strategist at Wunderlich Securities. But he conceded that the recent spike is "not gradual" and has forced investors to "sit up and take notice."

It's no secret that ultra-low rates helped fuel the bull market in stocks. Bond returns are so low that investors are willing to accept more risk in stocks, even stocks that are very, very expensive by historical standards.

After getting accustomed to low rates for nearly a decade, investors may be caught off guard by a sudden spike in rates.

The Treasury Department's Office of Financial Research published a heat map this week identifying weaknesses in the U.S. financial system. Just one of the map's six categories flashed red, signaling high vulnerability: market risk. Within that category, the report indicated that the biggest risk is that the market is unprepared for higher rates.

Trump's effort to overhaul the tax system could push rates higher. If it gets through Congress, tax reform could spook the bond market by adding to the federal deficit or overstimulating a healthy economy.

And the bond market could sell off if the European Central Bank and the Fed unwind their emergency bond-buying programs more aggressively than investors have been anticipating.

And bond bulls believe demand will stay high because the population of the world's major economies is getting older, and those people want safe, steady income.

If that's true, rising rates may pose a risk to the stock market, but perhaps not an imminent one.