A Ban on Parents in a School Lunchroom? Everyone Seems to Have an Opinion. 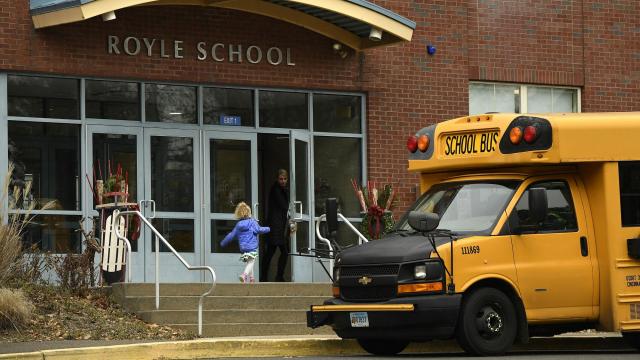 DARIEN, Conn. — Beth Bonanno had always looked forward to her special lunch date. She would leave the office to sit with her son, a second-grader, on his birthday and maybe three other days a year.

But then she got an email from the school district: Parents were being barred from the lunchroom.

The email incensed Bonanno and other parents. And what began as a small debate in the wealthy Connecticut town of Darien erupted into a controversy about parenting that rippled throughout the world.

“It doesn’t seem like a big story, but it’s something that personally caused me a lot of stress,” Bonanno, 42, said in an interview. “It was a big bummer to me. The reality is, as a full-time working mom, it was an opportunity to go at my discretion.”

The divisive issue once again raised a question sensitive to parents and administrators: When to let go?

Stephanie Jones, a professor of early childhood development at the Harvard Graduate School of Education, called the early elementary years “the first experience of some kind of independence” and added that “even though parents have the best intentions, sometimes they come in and over-help.”

But what about that hard-to-open milk carton? Elliott Landon, Darien’s interim schools superintendent, essentially told parents that students should learn to deal without them at the table.

“Lunchtime is a valued part of the school day where students are encouraged to practice social skills they may have been taught during other parts of the day,” he wrote in the Oct. 2 email. “With the guidance of school personnel, students also use this time to practice independence and regulation skills.”

A story published by The Associated Press, which ran on websites in places as far away as Saskatchewan and Thailand, quoted one parent’s reaction as a “punch in the gut.” The mothers became an easy target online, as people made assumptions about the parents who live in a town where the annual household median income in 2015 was nearly $209,000.

But this kind of policy, and reaction, is not unique to Darien. When parents are banned from the cafeteria, as they were in Beaverton, Oregon, in 2017 and Tampa, Florida, in 2016 — the response is well-reasoned, if not emotional. “The rule change is about the school’s convenience, not the interest of parents and students,” Chris Ingram, a columnist and a father, wrote in the Opinion section of the Tampa Bay Times.

Across the country, policies vary. In Texas, most schools allow parents to eat in the cafeteria; the Texas Association of School Boards’ website calls lunchroom visits a “great way to be involved with your child’s daily school experience.”

The New York City Department of Education said it does not have a blanket policy but allows individual schools to determine whether parents are allowed at lunch. Brian Perkins, a former superintendent in New Haven, Connecticut, and now an associate professor of practice in education leadership at Columbia University’s Teachers College, confirmed that parents lunching with their children was not a new or expressly suburban phenomenon. After seeing the email from the school district, however, he was not surprised by the frustration among parents in Darien.

“Part of my immediate reaction was their communication about why this was important might not have been as clear as it could have been,” Perkins said. “I’ve learned over time that sometimes communication failures turn small things into bigger things in school districts.”

Then again, he said, often parents can have a serious sense of entitlement when it comes to their children.

“We are in a society where people want what they want,” Perkins said. “The idea that on its face, I’d be told ‘no,’ that I can’t have lunch with my child, is for some, unconscionable.

“There are a number of reasons why that would be a prudent decision to make in a school district,” he added. “The first thing that came to mind was about space.”

“Steadily increasing” parent attendance at lunch was why the principals of Darien’s five elementary schools conveyed to Landon the need for a new policy, according to Tara Ochman, chairwoman of the town’s Board of Education.

“The principals brought forward concerns regarding the effective day-to-day running of their schools,” Ochman said.

The presence was so disruptive, she added, that some children had a hard time when their parents left. Others were disappointed that their parents did not come for lunch.

That was news to Bonanno. “I was the only parent there,” she said. “I wish more had come.”

Another parent, Terri Steadman, said at a videotaped October board meeting: “I feel like this email went out abruptly, without any consideration or discussion with the parents.”

She admitted at that board meeting that even she was surprised when she shed tears.

Parents said they would have been happy to sign up in advance with the schools or stagger their visits. “There are ways to find a happy medium, and they didn’t think to ask the parents,” Bonanno said.

Landon did not return multiple phone calls nor allow an in-person interview when a reporter visited. None of the five elementary principals would discuss the policy change when Times reporters called and visited the schools. One mother’s post in a “Darien moms” Facebook group got at least 50 comments in response to the lunchroom ban — some commenters were furious over missing out on a special opportunity, and others were upset that they had not known they could eat lunch with their elementary schoolers. Still others were perplexed that children would even want their parents at the table.

Beth Lane, the mother of a fourth-grader at Holmes Elementary, said that she was fine with the change but added that she has “less skin in the game” because Holmes had unofficially discontinued the policy several years ago.

“I think it’s healthy for children to have time when their parents aren’t present and where they can interact with other children without the parental structure, which I feel changes the dynamic,” Lane said.

She said Landon explained his rationale further at a meeting with the Council of Darien School Parents, of which she was a former co-chairwoman.

Jayme Stevenson, the first selectman of Darien, which is akin to a mayor, said she approved of the change. “Post-Sandy Hook, school security has become an important issue,” Stevenson said. “Managing the flow of visitors in and out of schools is a concern.”

The Newtown school district in Connecticut, which includes a new Sandy Hook Elementary School, however, has a quiet policy. According to a district staff member, parents are allowed to come to the school to have lunch with their children.