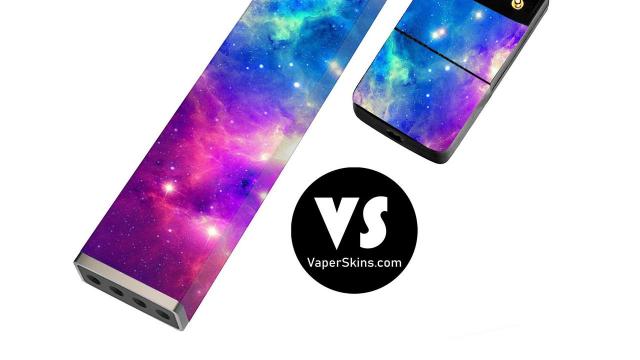 Michael Saiger doesn’t smoke e-cigarettes, but many of his friends like Juul, so he began to tinker with designs to make it feel more elegant.

“Back in the day, people used to have a beautiful Cartier lighter, or a really cool monogrammed lighter,” said Saiger, the founder and creative director of Miansai, a jewelry company known for men’s bracelets. “I wanted something that feels nostalgic paired to something that’s new and modern.”

Saiger’s blingy design represents the very high end of a burgeoning marketplace for so-called skins to dress up an off-the-shelf vaporizer. Dozens of companies sell wraps for e-cigarette devices through eBay, Etsy, Amazon or their own websites. They include Eonsmoke, Juul Necessities and J-Wraps, which allows for the option to design your own skin.

One common trait among them is the focus on Juul, which by some estimates owns 60 percent of the e-cigarette marketplace and is wildly popular among young people. (Perhaps too popular: The Food and Drug Administration has criticized Juul and other makers for marketing their products in ways that appeal to teenagers. Last month, the agency conducted a surprise inspection of Juul’s headquarters in San Francisco. And this week, the company said it will restrict sales of nearly all its flavored pods to the internet, to help prevent use by teens.)

Juul itself has nothing to do with this aftermarket business. Victoria Davis, a spokeswoman for the company, said, “We do not make, market or endorse these accessories.” The Juul system, she added, “is intended for current adult smokers only who want to switch from combustible cigarettes.”

Juul’s slim black vaporizer, which resembles an elongated flash drive, has been praised for its sleek design. But the company doesn’t offer its customers much in the way of personalization, beyond a few primary colors like black, silver and limited-edition turquoise.

Earlier this year, Matt Broderick, who is 22 and “into the whole vaping scene,” spotted an opportunity in the marketplace. A manager at a print shop in Boca Raton, Florida, Broderick and his colleagues began making Juul skins.

Sold under the brand Vaper Skins, the printed vinyl covers are priced around $7 to $12, similar to other skins. Designs include purple glitter, gray camouflage and Jazz cup.

“We try to stick with whatever trends are out at the moment,” Broderick said. “Right now, I’m working on one with a Trump and Kanye cartoon.”

The gold case from Miansai is beyond the budget of most college students, or most other e-cigarette users for that matter. Saiger has also designed a sterling silver model that sells for $1,000. He has sold 10 silver cases and one gold so far, he said.

“People vape, and then they put it in their pocket,” Saiger said. “With a case like this, you’d want to put it on a table. It’s a statement.”

So is the gold glitter skin offered by Vaper Skins. It’s $9.99 for a pack of two.