A 28-Year-Old Novice, She Took on the Machine and Won 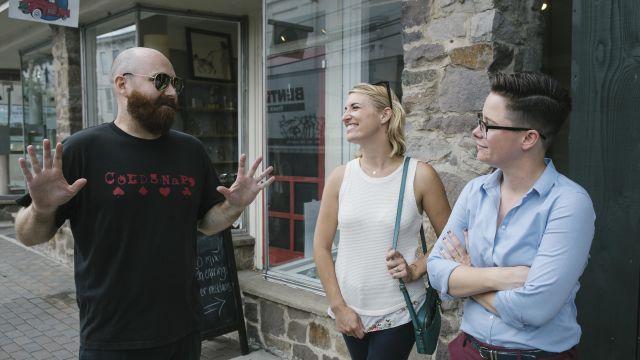 LAMBERTVILLE, N.J. — The welcome mat at the entryway to the home of this town’s likely next mayor reads, “The Patriarchy.”

“So you have to step on it before you come into our home,” said Julia Fahl, 28. “We had that custom-made,'’ added Kari Osmond, 31, Fahl’s wife and campaign manager.

It is a fitting symbol of what Fahl managed to pull off in this bucolic city along the Delaware River that draws visitors for its blend of antique shops, eclectic galleries and trendy restaurants. Fahl, who had never run for office, upset a 61-year-old incumbent in June, Dave DelVecchio, who had been in office since Fahl was born and is known to residents simply as “Mayor Dave.”

Fahl mounted the first challenge in DelVecchio’s 27 years as mayor, a contentious race that for 97 days after her announcement to run engrossed this heavily Democratic community.

As a young, energetic female candidate campaigning on a message of change, Fahl has drawn some comparisons to Alexandria Ocasio-Cortez, the upstart 28-year-old Democratic candidate in New York who also upset an entrenched incumbent with a grass-roots campaign.

Like Ocasio-Cortez, Fahl had to overcome the support of the county political machine, which had endorsed and thrown its operation behind DelVecchio, including, she said, blocking her from accessing voter data. And the same energy for a fresh direction among an energized Democratic base was palpable in her victory here, evidence that the desire to upend the establishment extends down to the local level.

“I think people are thinking they should have done more in the presidential election, so they’re getting a lot more active now,” DelVecchio said. “But it’s definitely a good time to be a woman running for office and it has been for some time, but now more than ever.”

Still, the similarities to Ocasio-Cortez only go so far.

For one, Fahl counts herself more in what she calls “the Clinton wing” of the Democratic Party and her calls for change are rooted in municipal business rather than the national issues animating the Democratic Party (on those, Fahl and DelVecchio share similar views). But when it comes to shade trees, trash and City Hall hours, Fahl seized on a growing unrest with how the town was run.

“My argument was that after 27 years in a position, you stop asking why you do things or how you could be doing things better and you just say this is how things are done,” Fahl said. “And there is a slew of things that are happening in this town that makes absolutely no sense.”

She grew animated describing a municipal government operating on “bankers hours,” and added, “Bankers don’t even use bankers hours anymore.”

“If you want to do something for your house, you have to take a day off work to go to City Hall and pull a permit,” she said. “That’s insane.”

Her arguments tapped into a growing sense around this town of 4,000 that City Hall needed a shake-up. The municipal concerns on the minds of many residents during the mayoral campaign may not have been as large in scope as national issues, like immigration or trade wars, but they pushed people to the polls.

“I told Julia like how hard it was to get a third bin for composting,” said Lauren Kiernan, 29, who owns a flower shop downtown. “Obviously, I create a lot of green garbage and I applied like three different times. I never heard back. They lost my checks. They lost my forms. Even trying to talk to them about issues like parking, I just never heard back. It was just like, everything I said to the city just went into the garbage bin.”

Of course, not everyone was eager to ruffle the carefully manicured vibe of this Democratic enclave, which lies along the border with Pennsylvania and is surrounded by a heavily Republican rural area. For years, Lambertville has been a refuge for many state government employees. Often referred to as “Georgetown on the Delaware,” many power brokers manipulating the levers of state government retreat 16 miles up Route 29 to sip complex cocktails at the Boat House or the many other bars and restaurants in town.

But the population has been shifting. A younger generation who wants some of the spoils of urban life — like a walkable downtown, trendy places to eat and crafty cocktail bars — but also seeks the tranquility and relative affordability of the suburbs has begun to transform Lambertville.

“We’ve had a turnover of people and there are a lot of new people in town and they don’t have all the history,” DelVecchio said. “And I didn’t do a great job connecting with them. So that was one thing.”

There came to be a simmering unrest between the “old guard” and “new guard” and the mayor’s race became a proxy for that battle.

“Change is hard, and change for the sake of change is something I don’t get,” said Stewart Palilonis, the former Democratic chair for the town and a supporter of DelVecchio. Sensing the dissatisfaction among neighbors, Fahl and Osmond had long tried to recruit someone to run, offering to put the full weight of their political expertise — Fahl as a professional fundraiser and Osmond as a state director for a member of Congress — behind a candidate.

“Everybody said ‘no,'” Fahl recalled. “And we were in this position where like I guess we’ll wait another three years and then try again, and that felt unacceptable. So then I ran.”

Though DelVecchio and Fahl never engaged in personal attacks, their supporters did. It became so nasty that Osmond forbade Fahl from looking at Facebook.

Though Fahl did recall one insult.

“The best one, in my opinion, was when they were calling me ‘IceTown,'” Fahl said, referring to a nickname for a character in the television sitcom “Parks and Recreation” who, as an 18-year-old mayor, bankrupts a town trying to build an ice-themed sports complex.

“They had the headline from that episode, where it’s like ‘IceTown’s Ice Clown Loses Town Crown,'” that was all over my Facebook,” she said. “That was truly funny, I’ll admit.”

To rebut concerns about her age and lack of experience, Fahl put herself through a self-styled “municipal school.” Once a week she would meet with a different former or current New Jersey mayor. Twice a week (but not on mayor day), she hosted a municipal expert — “so like a flooding expert, paving expert, business admins, budget experts, anyone who would agree to sit down and talk to me. Even weather experts.”

Surprisingly, Fahl, a seasoned political operative who most recently worked on Gov. Philip D. Murphy’s campaign, had always preferred the behind-the-scenes machinations of a campaign, found she was enthralled by the minutia of city ordinances.

“It was our constant conversation,” said Osmond. “Pillow talk was always about municipal waste.”

While she is running unopposed in the general election, Fahl has focused her campaign efforts in support of Tom Malinowski, the Congressional candidate running to unseat the Republican incumbent, Rep. Leonard Lance, in her district. It is has become one of the races that may help decide control of the House.

But Fahl’s surprising victory has already started conversations about what comes next.

“I made a commitment to Lambertville to see this thing through,” Fahl said. “I don’t want to be mayor in 20 years. But I did make a commitment to get some serious stuff done. So we’ll see.'’