Raleigh, N.C. — Justin Miller is one of the most interesting men in the Triangle. He's 6-foot-4, covered in tattoos, and he makes money as the CEO and co-founder of the insanely poplar app, WedPics, which helps couples aggregate photos taken by their wedding guests.

He isn't married, nor does he have children, but the North Carolina State University graduate has 13 dependents.

Miller, 36, has nine chickens, three dogs and one pig at his Raleigh home. On a breezy afternoon last week, Miller sat among his brood in the backyard, just a few feet from the coop he made for the birds to live in.

“It’s a nice break from being in the world of tech and the nonstop of just being on the computer," he said of sitting in his backyard.

About two years ago, Miller and his mother went to take a chicken keeping course at N.C. State. The three-hour course held on a Saturday afternoon covered the basics, from raising chickens to how to build a coop.

"It was really fun," Miller said. "It sounded like a fun hobby to pick up, certainly rewarding since you get fresh eggs on a daily basis."

After further research, Miller decided to build a coop and get some chickens. He started with eight birds, only to learn that two were roosters. With friends willing to take in the roosters, he continued his chicken journey with six. About a year ago, he added more to the flock when one of his roosters fathered a chicken.

"You don't want to introduce one new chicken into an established flock, so why not just make it three," he said.

The flock includes Yolanda, Little Jerry Seinfeld, Victoria, Mildred and Penelope. Some names have come from friends, while others from Miller himself.

"If you have two chickens, if you nine chickens, it seems about the same. Every single person who has gotten into backyard chickens, myself included, always starts out out by saying, 'I’m probably going to have three or four chickens and then three or four becomes five or six, becomes eight or nine.' I can honestly say I’m at capacity," Miller said.

Of the nine, eight of the chickens are different types. They each have different feathers and feet. Some lay eggs better in the winter than the summer. Miller built them an outdoor coop that includes swings, roosting areas, fans to cool them off in hot weather and other comforts.

Upon getting chickens, Miller said he was surprised to learn how much they dig and that they like to sleep very high up in the coop. They are also into cliques.

"They are really like high school girls. They have their groups," Miller said. "There is a clear pecking order, no pun intended."

And size doesn't matter. The largest chicken, Little Jerry Seinfeld, is actually near the bottom of that order, he said. 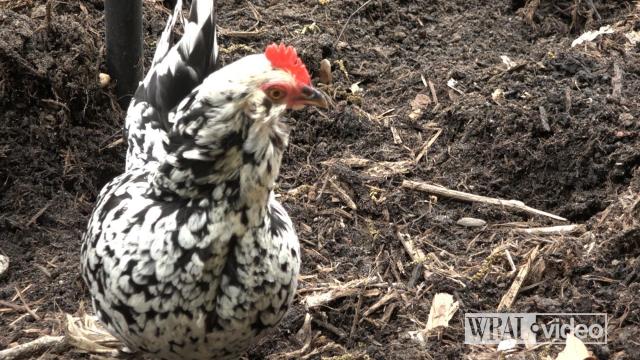 Miller has also turned his newfound collection of fresh eggs into a side business. He turned to the NextDoor app and now has a list of neighbors who buy fresh eggs from him each week.

It's only fitting that Miller shows off his devotion to his chickens via tattoos. He has a chicken foot on one leg and Yolanda's face and the "Yo MTV Raps" logo on the other. 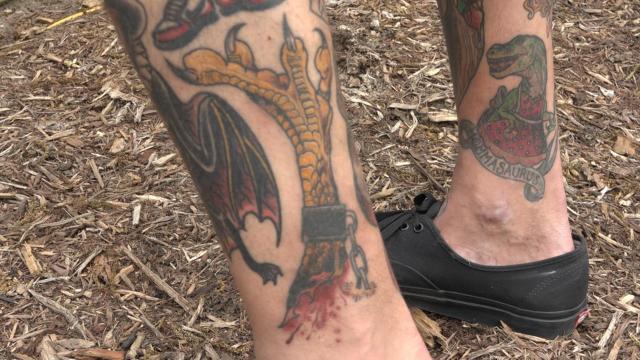 A few months ago, Miller's backyard crew grew with the addition of a pig, Theodore.

"I had been looking and thinking about rescuing a pig for some time. The timing was never quite right for me," he said. Then a friend volunteering at the Wake County Animal Shelter let him know a pig had recently been rescued off of the side of the road. After doing some research, he found that owners have three days to claim live stock from the shelter or the animal goes to auction.

"The animal auction, more often or not, results in people buying them to eat them. Once I heard that, I said ‘Well, I guess I’ll go grab this guy,'" Miller said. 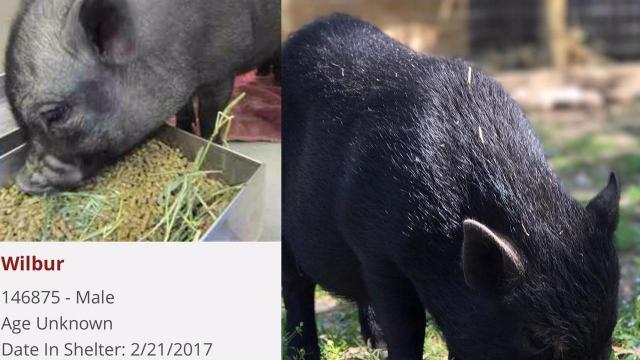 Theodore had a grey, very thin coat when he arrived at Miller's home. Now, the 40-pound pig is solid black and healthy.

How do the pig and chickens get along? Pretty well. The pig isn't allowed in the coop, although he tries to visit every now and then if the door isn't locked.

They each love to dig and each worms and bugs. The chickens have even eaten some snakes.

"I’ve seen them eat snakes and mice. They are ferocious. They are like mini dinosaurs," he said.

The pig and Miller's three dogs are good friends, but they can't hang out with chickens for fear they will eat them.

Shortly after getting the chickens, Miller said he decided to become vegetarian. He decided to try it for a year and stuck with it ever since.

Miller's coop, dubbed The Eggplant, is part of Tour D'Coop on May 20. This annual fundraiser for Urban Ministries of Wake County allows ticket goers to visit a variety of area coops and beehives in the downtown Raleigh area.

Guests who visit Miller's home will also be able to dine on tacos from El Taco Cartel, the taco bike Miller is an investor in. Miller also makes the salsa that the bike uses. And if he didn't already do everything, he is also brewing his own beer.