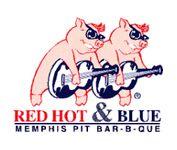 Avg User Rating: 4 out of 5
Total Votes: 17
Sign in to add your rating

Barbeque is said to be one of the only “truly American” foods and its history is firmly rooted in “the South.” Red Hot & Blue is honored to be one of the truly great barbeque companies in America delivering tradition and value each and every day.

In the late 1980’s three Southerners and a transplanted Yankee longed for authentic southern barbeque and the great blues music they all loved. Unable to find that winning combination anywhere in the Washington, DC area they decided the only way to get it done was to open a restaurant of their own.

That first Red Hot & Blue restaurant was conceived and opened its doors to rave reviews in Arlington, VA just a few short miles from our nations capital where three of the founders worked on Capital Hill. One of the original investor/founders was then-U.S. Rep. Don Sundquist of Memphis, who served 12 years in the House of Representatives and eight years as governor of Tennessee. Another original investor was the late Lee Atwater, a blues musician and legendary political figure who managed George H.W. Bush’s successful race for the presidency and served as chairman of the Republican National Committee. It was just a group of friends who wanted to eat good barbeque, listen to some good rhythm and blue tunes and make new friends in the process; they were successful beyond their wildest imagination.

From the beginning the mission was clear: “serve only the best quality barbeque available anywhere in a fun casual atmosphere surrounded by authentic blues music and memorabilia.”

The name Red Hot & Blue is taken from the title of DJ Dewey Phillip’s radio show that aired on WHBQ-AM in Memphis, Tennessee in the 1950’s. This radio show introduced the world to Elvis Presley, Jerry Lee Lewis and Johnny Cash and broadened the audience for artists like B.B. King, Muddy Waters, Robert Cray, and Rufus Thomas. The atmosphere at Red Hot & Blue captures the essence of this timeless era with its hand picked blues memorabilia and the classic rhythm and blue tunes playing in the foreground. From the beginning, the barbecue had to be authentic, using hickory logs, low temperature and long cooking times with only top quality meats and ingredients.

Many other companies have tried to copy this winning formula, but Red Hot & Blue’s commitment to the highest quality ingredients has kept us at the top of the barbeque heap. In the beginning, celebrities and politicians gathered at the Arlington restaurant where they ate, played the blues, and enjoyed each others friendship. Now with over 20 years of history the hits keep coming; Red Hot & Blue has been:

There may be some barbeque players who are bigger, but there is still none better!

I think this place is okay! Lots of bbq options! I'm not a huge bbq person but I loved the fried pickles and the hush puppies! I would def be back again!

Marcus G was our server. I've been a restaurant manager for 10 years and his customer service was exceptionally awesome. Even now through COVID things can... (more)