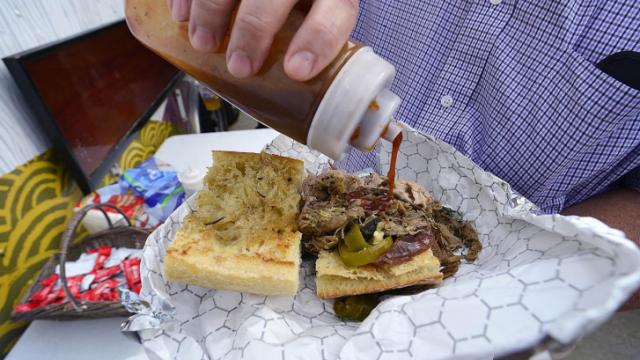 Every year we list our Five Favorite barbecue joints, but this year we turned the list over to you!

You submitted your votes by commenting to our previous post. We counted the votes and here are the top five vote-getters and your new Five Fave: Best BBQ!

Humble Pig (Raleigh/RTP/Durham) - This food truck got a lot of your votes and we know why! They regularly hit Durham and Raleigh food truck rodeos and make stops outside the WRAL studios around lunchtime. We rarely resist the lure of their barbecue tacos and we've even seen WRAL meteorologist Elizabeth Gardner stopping by after the noon news to grab some barbecue to go! Facebook commenter Marie Doyle said it best when casting her vote - "The way the meat is smoked you don't need sauce, but if you do - it's a bonus for the tastebuds!" We recommend the Kickin' Butt sauce!

Stephenson's BBQ (Willow Spring) - Facebook user Rachel Patrick said their barbecue is "the best in the state." She added that "The Brunswick Stew and BBQ chicken is off the charts." Many of you agreed with her assessment of this gem off of NC Highway 50 North near Garner. Other favorite items mentioned: The banana pudding, hushpuppies and sweet tea!

B's (Greenville) - This isn't in the Triangle, but got a lot of your votes so we had to include it! This family-owned place has been serving up barbecue to hungry diners since the 1970s. They serve each day until its gone and judging by the long lines, we suggest getting there early.

Parker's BBQ (Wilson) and Bill's BBQ (Wilson) - These two Wilson barbecue spots had the same number of votes so we decided to include them both! Parker's is known for its tangy vinegar sauce and Eastern NC barbecue. Bill's was even the subject of a Tar Heel Traveler package. Both have made our lists before.

Allen and Son (Durham) and Fatback's BBQ and Rib Shack (Fayetteville) - Allen and Son has made our list before in 2011 for their tender barbecue and hushpuppies. Fatback's is a new addition to the list. This Fayetteville restaurant, locate off of Hope Mills Road, has been featured on the TV show "BBQ Pitmasters." They serve up fresh barbecue and baked beans with pineapple. YUM! Definitely worth the drive from the Triangle.