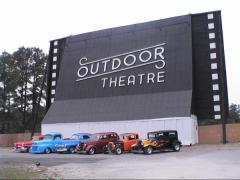 Avg User Rating: 4 out of 5
Total Votes: 14
Sign in to add your rating

Raleigh Road Outdoor Theatre is the oldest of the seven operating drive-in theatres in North Carolina. The Raleigh Road Outdoor Theatre first opened on July 15, 1949 as the "Moon-Glo" Theatre. The first film to show at the Moon-Glo was: "Ali Baba & The Forty Thieves", plus three color cartoons. The drive-in is your best "Movie Value" we show first run movies at a fraction of the cost of an indoor theatre in the Triangle area. The Kopp's )have completely renovated the theatre and it's snack bar/restrooms. A new playground was installed, the theatre grounds were re-landscaped. In 2007, the giant screen tower shown on the front page of our site, was painted to resemble a large 35MM film strip. At the Raleigh Road Outdoor Theatre we plan on bringing you many nights of quality family entertainment under the stars! As a family-oriented theatre, we tend to book films that attract families, children, young adults and adults. We tend to shy away from heavy "R" films that are not suited for our core audience. We may occasionally book "R" rated films, that we feel are suitable for exhibition that will draw adults and young adults. We refuse to exhibit films that show heavy violence, sex or have no moral values.

Ive never been to a drive in movie theater before and I absolutely enjoyed the experience. The easy drive north was about an hour from Apex. Pulled in to... (more)
Foodie C. Jul 11, 2020

I'm a little concerned with the replies from management my previous reviews. I give plenty of reviews the many years I have been on yelp. I have never had... (more)

I absolutely love this and I think it's one of the best kept secrets in Raleigh. It's not meant for the impatient. They post their movie showings a week in... (more)