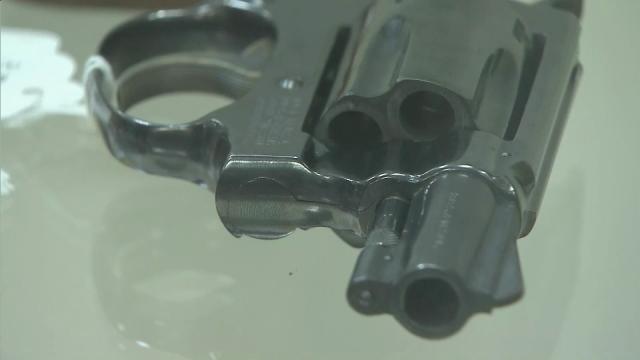 Raleigh, N.C. — A 17-year-old arrested Saturday for breaking into a gun store was serving probation on a previous breaking and entering charge, and faced 21 criminal charges for an earlier break-in at the same store, according to court records.

Sneed is a junior at Enloe High School in Raleigh.

Officers arrested Sneed, who was wearing a dark jacket and carrying the guns in a duffle bag, shortly before 2 a.m. Saturday. According to investigators, Sneed also stole 19 handguns from the store in a robbery on May 11.

He faces 34 counts of larceny of a firearm, each count carrying a maximum possible penalty of 39 months in prison.

Store owner Kevin Johnson said the thief got in through an air vent and targeted the most expensive guns.

"Once he got in here, he tipped over the cabinets and proceeded to break the glass and then stuffed the guns in a backpack," Johnson said. It was caught on surveillance video.

In April, Sneed pleaded guilty to one breaking and entering charge and was convicted on another. He was sentenced to 24 months supervised probation. Those felony convictions led arresting officers to add charges of possession of a firearm by a felon to the charges from this weekend's break-in.

"Obviously it's devastating, and it makes you very angry," Johnson said. He estimated it would cost $95,000 to replace the stolen guns and clean up his store.