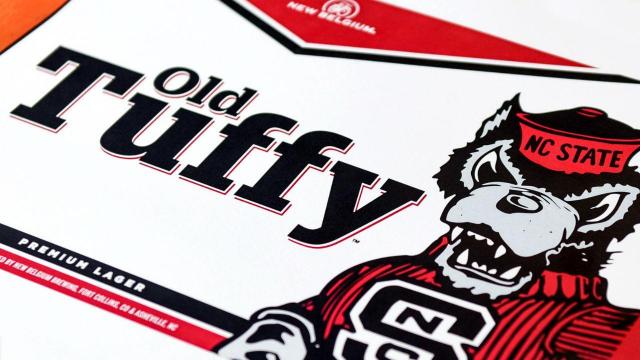 Cans of Old Tuffy Premium Lager, a collaboration between NC State and New Belgium Brewing Company, have been popping up on social media feeds in recent weeks. Wolfpack fans will finally be able to get their hands on the beer on Aug. 5th.

New Belgium has planned nearly 40 events across North Carolina to celebrate the release of the beer, including an NC State Alumni Association kickoff party at Player's Retreat that will feature the first tapping of an Old Tuffy keg. The beer will be available year-round and will undoubtedly be a staple of tailgates throughout the fall and spring seasons.

Chris Allen, a Brand Activation Manager for New Belgium, joined the 919 Beer Podcast to discuss how Old Tuffy came to be and the incredible response from NC State alumni.

How New Belgium and NC State came together for Old Tuffy Premium Lager: A couple years ago in New Belgium's hometown of Fort Collins, CO, we produced a beer for our friends at Colorado State called "Old Aggie". They were building a new stadium at the time and we have a field level bar a few feet away from one of the endzones. We've been in Asheville for a few years now and we thought "why not shoot our shot in North Carolina?" Enter NC State. They have a great brewing sciences department. For every case sold, there is a contribution that goes back to the university to help promote safe consumption programming with the students and we're kicking back money to the brewing sciences and fermentation department. Beyond that, we're also bringing some of their students up to Asheville for internships and educational trips. The partnership is way more than just us putting their image on our can.

The decision to brew a year-round lager beer: You want something that's palatable for everybody. Folks like stouts and IPAs, but we wanted something for when it's a really hot Saturday in September. Whether you're hanging out in a parking lot or after you've mowed the lawn, you want something light that you can drink a handful of and this beer is only 4.7% ABV. It's really light, really crisp, really easy, and it's not offensive to anyone's palate.

Reaction and demand from NC State alumni: The positive response and demand isn't just local. We've had folks from Denver, Seattle, Miami, and even from Brisbane, Australia. We've had alumni chapters from all over have asked "what do we need to do to have this on hand by the end of August?" We've had some people reach out to us, including one high school coach, to get beers for parents for recruiting videos, so when a player is committing to NC State they'd have their parents in the background shotgunning Old Tuffy cans in the background. We can't even respond to those requests for obvious reasons.

Get the inside track on all things beer in the Triangle and North Carolina from the 919 Beer blog.