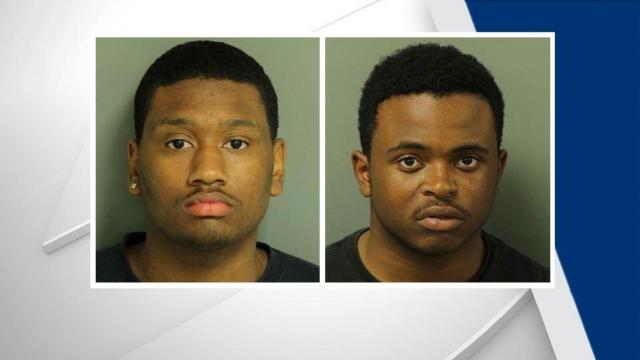 Raleigh, N.C. — An Athens Drive High School student raped another student in a stairwell at the school Friday afternoon, according to a 911 caller.

The unidentified caller took the 16-year-old girl to WakeMed Cary on Friday night and informed authorities of the alleged assault at about 8:30 p.m.

The girl left her fourth-period class to get some work from another teacher when she encountered two students, whom she identified as "Blitz" and "AJ," in a stairwell, according to the caller.

As Blitz stuck his hand down the girl's pants, AJ told him to stop and said they needed to leave, the caller told the 911 dispatcher. When AJ finally left, Blitz raped the girl, the caller said.

The girl didn't report the assault at school but told the caller about it Friday evening.

Jeffries, who court records state was on probation for an earlier crime, was being held in the Wake County jail under a $1.5 million bond. Bullock, who police said acted as the lookout during the assault and later lied repeatedly to investigators about it, was being held under a $100,000 bond. A judge lowered Bullock's bond from $750,000 and ordered that he be on electronic monitoring and have no contact with the girl if he is released on bond.

"Please understand the gravity of this situation impacts all of us," Athens Drive High Principal Stephen Mares said in a voicemail message for parents Sunday afternoon. "I'm sickened by this, and I want to assure you that all of us at Athens care deeply about the safety and well-being of all of our students."

Jeffries' father said after a Monday afternoon court hearing that his son is innocent, saying the sex was consensual and that the girl made up the story when she and his son got caught.

Bullock's family likewise said he wasn't involved in any wrongdoing.

"Ajeema is a sweet child, never been in trouble before. He's caring. He's loving. He was just in the wrong place at the wrong time," said his aunt, Kelly Mial.

The charges mark the second alleged sex assault at the school in less than four months.

Michael Armstrong, 16, was charged in January with two counts of second-degree forcible sex offense one count of kidnapping in connection with a Dec. 15 incident in the locker room at Athens Drive High.

Many Athens Drive High students and their parents said Monday they're concerned.

"I really don't like the way things are coming out because we would want our school to retain its reputation for what it is," parent Doris Sande said.

"It's not good for our school," student Jashaun Bunch said. "People's going to come around here and think Athens Drive is a real bad school and all this sexual assault, and we just need to stop it."