Raleigh, N.C. — The 75-foot-tall monument that served as a tribute to fallen Confederate soldiers was removed from State Capitol grounds by a crane Sunday morning.

Saturday, Governor Roy Cooper released a statement about confederate monuments after a night of protests over the statues that said they were a tribute to white supremacy that didn't belong on state grounds.

"I have ordered the Confederate monuments on the Capitol grounds be moved to protect public safety. I am concerned about the dangerous efforts to pull down and carry off large, heavy statues and the strong potential for violent clashes at the site. If the legislature had repealed their 2015 law that puts up legal roadblocks to removal we could have avoided the dangerous incidents of last night," he wrote.

Small sections of the confederate monument are being dismantled piece-by-piece Sunday.

Ilina Ewen, a Raleigh resident, was on the street Sunday watching the memorial being taken down. She said that this moment for her is a sign of something greater.

"You can feel in the pulse of our nation," Ewen said.

"This is a metaphor for all the other systems that are going to be taken down, she said. "This is a great symbol to stand behind and be celebrate that change." 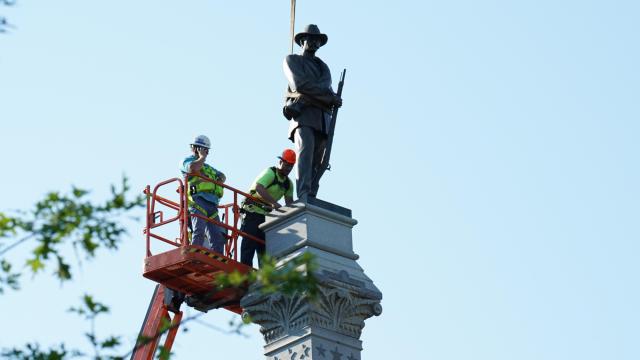 Two other confederate monuments, a monument to Henry Lawson Wyatt and another to the Daughters of the Confederacy were also removed by request of the governor.

This 75-foot-tall statue was unveiled in 1895, around 30 years after the end of the Civil War. At the top of the statue is a Confederate artillery soldiers holding a gun. Near the bottom of the column are two statues, one representing the Confederate infantry and the other a Confederate cavalryman.

When the monument was proposed, it was controversial. According to archives populist and republican leaders objected to the monument. The memorial was unveiled at a time when Southern Democrats were beginning their white supremacy campaigns to regain power. Historians say the democrats used these monuments to control the narrative about the Civil War.

This particular monument was about all confederate soldiers, instead of one particular general. It was meant to symbolize the great lengths the people of the south went to in fighting for the confederacy.