7 reasons to live at the Crystal Coast year round

We often think of the beach as a weekend destination or a prime spot to spend our summer vacations; but for many North Carolinians, the beach is home. In fact, North Carolina boasts 300 miles of barrier-island beaches, and more people are discovering that the coast isn't just a place to retire. You can build a life, start a family, grow a business and have a very successful career, all with a little sand between your toes and the sound of waves nearby.

For residents of the Crystal Coast, which covers Carteret County and includes multiple waterfront towns including Emerald Isle, Atlantic Beach and Beaufort, the gleaming water and lush landscapes are just part of an idyllic lifestyle that locals get to live every day.

Though the beaches and coastlines alone are convincing enough, here are seven more reasons to live at the Crystal Coast year round. 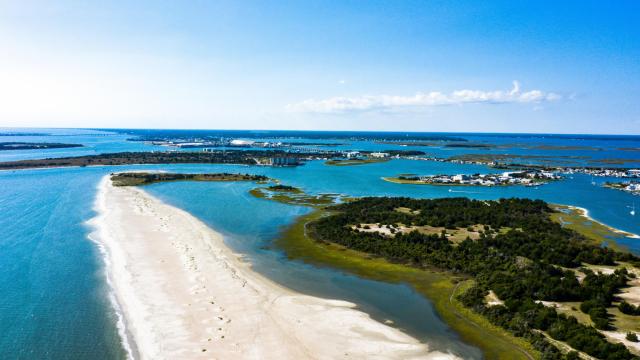 1. Vacation Vibes Are an Everyday Thing

Popular shows like "Beverly Hills, 90210" depict everybody going about their daily lives, all with the beach as a constant backdrop. On the Crystal Coast, this is real life for residents every day.

Locals can begin their days with an early swim, paddling or surf session before heading into work; or end their days enjoying the sunset by taking a walk on the beach. Weekends are spent fishing, sailing or searching for seashells, and the hint of salt always hangs in the air.

"Winter time is actually my favorite time to be on the beach," said resident and local business owner Sloan Freeman. Freeman moved to Carteret County in 1999 to work at the Duke University Marine Laboratory, which is located in Beaufort. She is the CEO of Morehead City-based marine mapping services company Geodynamics.

"It's mostly deserted, but there's something really energetic about the beach when it's cold. I take my dog out and it's just really beautiful," she said.

While work, school and routines go on, residents of the Crystal Coast are offered everyday vacation vibes with the beach or sounds and waterways right in their backyard.

Carteret County high school students earn the third highest ACT and SAT scores in the state, behind only Chapel Hill-Carrboro and Watauga County. The public school system is lauded as one of the best in North Carolina and dispels the myth that education isn't a priority in coastal communities.

Trace Cooper, who serves as mayor of Atlantic Beach and who grew up in Carteret County, said he has friends who have moved to the Crystal Coast from much larger cities like Raleigh in order to enroll their children in the Carteret County Public School System.

"They say, 'I can pay a lot of money to put my kids in private school, or we could move and live at the beach and get a much better education for our children for free,'" Cooper said.

Freeman, who with her husband, Chris, has two children in the Carteret County public schools, agrees the school system is a key reason why she and her husband located Geodynamics in Morehead City.

The Carteret County Public School System has 18 public schools that are "committed to creating opportunities for all students to do their best and to succeed."

3. A Unique and Flavorful Restaurant Scene

Carteret County is known for its food.

Its proximity to the beach means fresh seafood, of course, but restaurants like the Ruddy Duck Tavern, Amos Mosquito's and Beaufort Grocery, and bars like Backstreet Pub, Arendell Room and the rooftop Torpedo Lounge give foodies variety that is sure to please.

Tourists understandably want good food when they're visiting places, but it's the locals who create and provide it.

"Being a resort community allows us to have a really robust culinary scene," Cooper explained.

In addition to his mayoral responsibilities, Cooper is involved in the local food scene and owns several restaurants. Cooper's holdings include Pescara and Idle Hour Biergarten in Atlantic Beach.

Live at the beach, and you'll reap all the yummy benefits; food after all, is the heart of the south.

4. Opportunities for Business and Entrepreneurship

"Work hard, play hard" may be an overused mantra, but for those who work or conduct business and reside in Carteret County, it's simply the truth.

When people think of the beach, they may assume that's all there is. However, people will rethink what it means to be a thriving community when they see all that the Crystal Coast has to offer those interested in business and entrepreneurship.

Job and career opportunities abound, and Carteret Community College offers multiple business, technology and healthcare associate degrees, and a wide range of vocational certification programs for those seeking to work at the coast.

If you're a remote worker or entrepreneur, it's also the perfect place to set up shop — TIDAL Coworking recently opened in Morehead City.

"A lot of my friends here either own their own businesses or work remotely for tech companies or other businesses," Cooper said. "TIDAL used to be an office space and art gallery, but we reconfigured the space for coworking because we realized that there's a community of people here working from their homes or small offices who enjoy the co-working community model."

5. Less Traffic and a Better Commute

Citizens of larger metropolitan areas like Charlotte and the Triangle know the all-too familiar frustration of rush hour traffic. In Carteret County, you won't have to worry about this pain point as the traffic is lighter and commutes, depending on where you reside and work in the county, are quick and easy.

"You can live five minutes from your job in an affordable home compared to a bigger city where you have to live further and further away to get that affordability," opined Freeman.

According to 2018 data from the United States Census Bureau, Charlotte has the longest average commute in the state and Durham has the second longest. Better commute times for Crystal Coast residents mean they're spending more time doing the things they want to do, like fishing or enjoying the beach, and less time on the road.

If you like the outdoors, Carteret County packs a punch when it comes to nature and recreation. Of course the beach and area waters offer fishing, swimming, surfing, paddle boarding, kayaking and boating, but its parks and trails are also some of the best North Carolina has to offer.

Fort Macon State Park in Atlantic Beach, for example, is the second most visited state park in North Carolina — 1.3 million people visit it each year. The restored Civil War-era fort has "a museum-quality coastal education center and an unspoiled shoreline for swimming, surf fishing and beachcombing," as the park's website states. The park offers "undisturbed natural beauty and opportunities to explore and learn about salt marshes, estuaries and dune fields."

"Water makes up a huge part of our county, but I think that some of the land outdoor activities don't get enough focus," Freeman said. "We have some really cool hikes on the barrier islands that run through maritime forests. One of the trails is a three mile loop at Fort Macon in Atlantic Beach — it runs through the maritime forest along the dune crest on the beach side. You get so much elevation that you can see out over all of Beaufort Inlet and view Shackleford Banks. Another great trail runs through the Theodore Roosevelt Natural Area adjacent to the Pine Knoll Shores Aquarium."

Living at the Crystal Coast year round means marathon runners can clock in their miles while exploring dozens of different routes, fishermen can enjoy year-round fishing, golfers can tee it up all year long, and outdoor enthusiasts can get their nature fix in at any time.

Carteret County is a place where you know your neighbors and your neighbors know you. It's got the small town southern charm and the laid-back vibes of a coastal city.

Beach towns have a reputation for being touristy, but when tourist season dies down, the locals have each other. Both Cooper and Freeman remarked that the small town feel of the Crystal Coast is one of the things they love most about living there.

Cooper, who grew up in Atlantic Beach, moved away for 15 years to attend college and law school in New York and practice law in California. But the call of the coast called him back home.

Freeman, a transplant from Florida, said the Crystal Coast had a "real homey feel" to it. She said she might not run into people she knows at the beach souvenir shops, but she certainly brushes shoulders with familiar faces at the local hardware and grocery stores.

"I finished my grad school program here and I never left. I moved down here and I was like, 'I'm not leaving. I'll just figure out how to stay,'" she said. That's when she and her husband started Geodynamics, which just completed a major building expansion in Morehead City.

Added Cooper, "When I came back, I was working at a law firm in Silicon Valley and just needed a little bit of a breather. I took a sabbatical and came home for what I felt would be six months, and that was 15 years ago. I always knew the Crystal Coast was a beautiful place to live, but when I returned I was surprised to see the quality of life, great restaurants and interesting people. The things that I loved about living in big cities existed here. Plus I could go out on the boat or get in the ocean every day."