People cite spiders are one of the scariest pests around. But whether small or big and hairy, these eight-legged arachnids have received a bad rap for no reason. Here are seven of the most common spider-myths and the truth behind them. 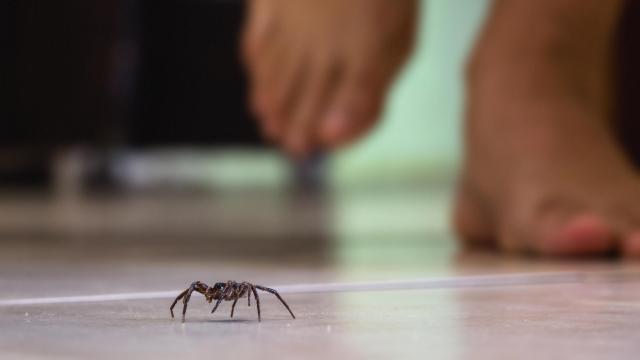 "Hey, did you know you swallow seven spiders a year in your sleep."

This common "fact" is usually followed by a round of "eews" as everyone then recounts their last close encounter with an arachnid. Fortunately, this common story is completely false.

Spiders aren't interested in climbing anywhere near you while you're in your bed. Spiders use vibrations in their webs and surrounding environment to warn them of danger. At night, we're snoring and breathing, creating the kinds of vibrations that spiders avoid.

So if you are an open-mouth snorer, you're actually warning spiders to stay away, not inviting them into your open mouth.

This story takes a number of different forms when it's retold. Sometimes the person buys bananas, other times it's a cactus. But what always happens is the foreign plant or fruit begins vibrating before erupting with a huge number of spiders.

This urban legend preys on the idea that everyday plants are secretly harboring some of the creepiest pests out there. Fortunately, it is just that, a legend.

Spiders do not burrow into plants, they lay their eggs in burrows, or on webs that would be visible on a cactus.

Spiders may get stuck in a bunch of bananas, but they aren't lurking inside the fruit waiting to pounce, they've just been unluckily caught up when they were picked. These spiders would also be visible, so just do a thorough check of the exterior of any plants or fruit you might buy and you shouldn't have any need to worry.

Hollywood makeup artists can make anything look realistic, even a mass of spiders bursting forth from someone's cheek.

This legend regained popularity recently in the movie, "Scary Stories to Tell in the Dark," but it's just that, a story. A spider bites someone's cheek, it balloons into a welt and then baby spiders emerge.

Fortunately, spider bites will not transmit eggs into your cheek. While a bite may contain venom that could cause side effects, it won't result in the birth of baby spiders.

Still, if you have a large welt on your cheek, go get it checked out by a doctor.

Thank goodness daddy long-legs spiders have such long legs. They're the most venomous spiders out there and would kill you with a bite, but they can't reach.

These long-legged spiders do have some venom, but nothing strong enough to kill you or even cause more than a little discomfort.

This myth was famously debunked on camera for an episode of "MythBusters," when host Jamie Hyneman was bitten. He described the bite as a mild burning sensation, but it quickly faded and caused no real harm.

For some of us, spiders aren't scary, they're friends that eat mosquitoes and other unsavory bugs that do want to bite us.

If you're one of those lucky individuals, the next time you see a spider inside, don't try to help it out and put it outside.

While spiders can adapt to their environment, there are both indoor and outdoor spiders, and they won't be able to survive in each other's territory.

If you're seeing spiders more frequently in your house, that means they've always lived inside (and it might be time to call an exterminator) and that it's most likely mating season. This coincides with the fall season and changing weather, but they are not coming indoors to escape the cold.

Black widow spiders are known for being incredibly venomous and dangerous.

It's true that a bite from one of these arachnids can cause severe muscle pain, spasms, cramps and can last for weeks. But many times these bites are non-fatal.

A 2012 report from the American Association of Poison Control Centers found no deaths in the United States since 1983. Only the very old, very young or already particularly vulnerable are in any serious danger from black widow bites.

Not all spiders live in spiderwebs. Many types of spiders use these webs to catch unsuspecting prey, but others reside in underground burrows and hunt for food.

And not all webs are created equal, some appear messy and full, while others are geometric and exist on a plane.