6 Tips for Getting Your Solo Play to Broadway 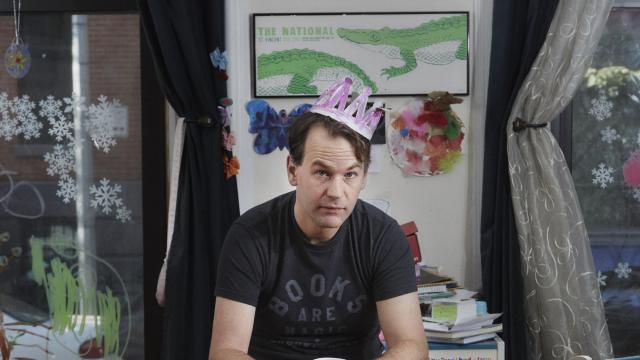 I recently wrote my fourth solo play, a comedy about how no one should ever have children, and how, after my wife and I had a child, I learned that I was right! Anyway, “The New One” is going to Broadway and the biggest question I’m asked since I announced the run is “How did that happen?”

I’m not sure. But if I take a step back and try to answer the question, I’d say, “There was no single step.” It was a series of steps over years. And, even then on top of that, it’s luck. It’s your 10,000 hours of preparation meeting 12 other people’s 10,000 hours of preparation meeting $3 million laundered through the Cayman Islands … meeting luck.

So what are those steps? For me, it began with my first solo play, “Sleepwalk With Me,” 15 years ago. If you want to try writing a solo play, I’d suggest that you:

1. WRITE IN A JOURNAL: Document your life. The good stuff. The bad stuff. But mostly the bad stuff. What’s wrong with you is more interesting than what’s right. I’ve always felt like we go to solo theater to be told secrets. When I was developing “The New One” I was writing in my journal all of these secret feelings I had about being a new dad. Feeling like everything I did was a mistake. One day I wrote, “My wife and daughter love each other so much … and I’m there too.” In the margin I wrote, “This could be something!”

I shared it with my wife, Jen, who’s a poet, and she encouraged me to say it onstage. That line ended up forming the foundation of the whole play.

2. SHARE IT WITH YOUR SMARTEST FRIENDS: Jen and I are each other’s first readers. I also share my work with Ira Glass [host of “This American Life], my director Seth Barrish, and my brother, Joe. The question I always ask is not whether they like it. That’s pretty useless. What I ask is “When were you bored? When were you most excited?”

3. HIRE YOUR WIFE:OK, you might not be able to hire your wife, but I think it’s wise if you’re writing autobiographically to include the people closest to you in the process. One day I asked Jen to brainstorm with me for a section I was writing about some of our daughter Oona’s first-year milestones. She pulled out her poetry notebook and read me this:

An infant reaches for something — I don’t know what — pushes it farther away and cries in frustration each time she reaches, not realizing she is crawling for the first time.She is just like her father.

Now I recite that poem in the play verbatim.

4. PRACTICE:Over the course of two years I’ve performed “The New One” in 60 cities in three countries and I’m still making changes. The show will run for 12 weeks at the Cort Theater and I will have my binder backstage after every performance, making notes on what could work better. The script is a living, breathing item that changes constantly and the audience has everything to do with that. By the way, an “audience” can be any number of people. It can be a living room of friends, an open mic at a coffee house, or the speech at a bar mitzvah. These are not joke examples. These are memories. Now what do you do with the feedback?

5. REWRITE: When I studied dramatic writing in college my professor John Glavin printed out the screenplay for “American Beauty” and told me, “Notice that it says draft 12.” I remember thinking, “That must be an anomaly.” But it isn’t. Everything I’ve produced on stage or screen went through 10 or 20 drafts. Believe it or not, you’re currently reading the 12th draft of this.

Rewriting is a badge of honor.

For a year the final story in “The New One” took place with my wife and daughter on a beach. And one day Ira Glass said to me “It shouldn’t end there. It should end somewhere else.” (I won’t say where).

I had already toured 30 cities with artwork of myself on a beach. I had made a promotional video with live seals in La Jolla, California, on a beach. Now the beach story is gone.

6. BRACE YOURSELF FOR CRITICISM: Revealing yourself can be lonesome. When an audience doesn’t respond, it feels like they’re saying, “Not only do we not like your show, but we don’t like you as a person.” And sometimes they are saying that. So don’t hang out with those people.

Sometimes those people are in your family and you have to hang out with them; it would take another set of tips to deal with that. The point is, you’re taking a risk for a reason. You’re doing it for the people who might feel better about something in their lives because of something you’re willing to admit about yours.

So if you’re interested in having a solo play on Broadway, that’s where I’d start.

And after all that, if you’re lucky, your 10,000 hours will form a perfect collision with 12 other people’s 10,000 hours and a theater will open up because “Network” decided to move from the Cort to the Belasco and the stars will align and on that day you’ll have yourself a Broadway show!

And you will walk up to the theater for the first day of rehearsal and a young beautiful couple will walk by and look up at the marquee and say “Who’s Mike Birbiglia?”