Peanuts are an affordable, healthy and eco-friendly food found everywhere in the United States and most countries around the world. But did you know they've been a part of baseball history for more than 100 years?

Here are six facts about the popular snack food that you may not have know about. 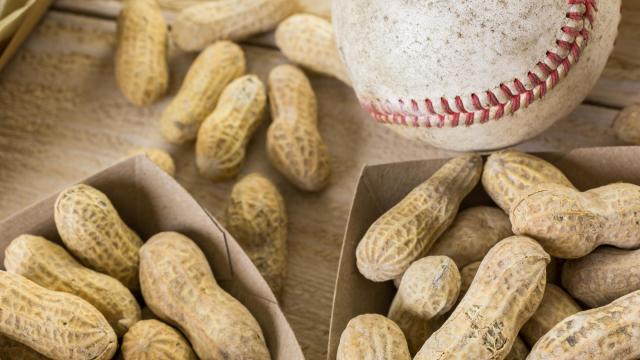 1. When was the song "Take Me Out to the Ballgame" written?

The relationship between peanuts and baseball goes all the way back to when a peanut company bought ad space on the back of scorecards in 1898.

The snack was a big hit in stadiums, and only a few years later, in 1908, the song "Take Me Out to the Ballgame" featured the line "buy me some peanuts and Cracker Jacks," which has forever united the two American traditions in the public mind.

Peanuts are marketed, sold and consumed as nuts, but are not technically a nut.

They are actually legumes, which are seeds within pods. Nuts, on the other hand, are fruits inside a shell.

Regardless, peanuts are treated as nuts by the general public. It is not dissimilar to the fact that the tomato is actually a fruit, even though they are classed and consumed with vegetables.

3. Which nut has the most protein?

Nuts, in general, have quite a bit of protein per gram.

Despite not being a nut, if classified with nuts, peanuts have the most protein, at 8 grams per ounce.

4. Which state grows the most peanuts?

Many states, especially across the deep south, grow significant crops of peanuts.

The state that grows the largest percentage, though, is Georgia, which produces around 42 percent of the nation’s peanut crop every year.

5. What are the most common types of peanuts?

Many types of peanuts exist, but four main types are grown on a large-scale and sold in the United States.

Valencia and Spanish peanuts are not quite as common. These are more often used for special purposes like candy.

6. Where does the nickname 'goober' for peanuts come from?

Southerners will sometimes call peanuts "goobers." This has a long, complicated history that spans three continents, apart from being a fan favorite, chocolate-covered candy from Nestle.

Spanish and Portuguese traders took the peanut from South America to Africa, where it became popular and spread rapidly. Later, when Africans were forced to travel back across the Atlantic, they brought the peanut along with them.

The Congo word for peanuts is "ngubas." Eventually, this term morphed into "goober" and is still used today.