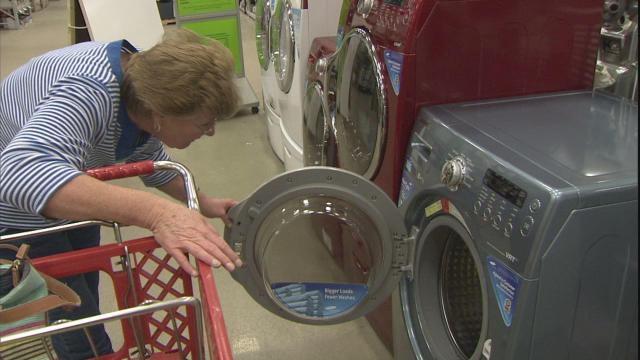 Raleigh, N.C. — About 20 percent of the money allotted for rebates on the purchase of energy-efficient appliances remained for shoppers who put off their purchase until Sunday, according to Seth Effron, a spokesman for the State Energy Office.

North Carolinians can get an instant 15 percent rebate off any Energy Star-qualified washer, dishwasher, freezer or refrigerator. The rebate program began Thursday and will run through Sunday or until an $8.8 million fund runs out.

In three days, consumers bought 47,087 appliances eligible for the rebate, he said. Earlier this week, he estimated that the funds would cover rebates for about 50,000 appliances.

All retailers have access to the state's running tally of rebates, so they can see how much money is left in the fund.

Effron said that each $1 million in rebates contributes to $6.7 million in appliance sales.

The $8.8-million fund for the rebate came from the federal economic stimulus package.

The rebate on Energy Star appliances comes as the federal government is tightening qualifications for the program.

A March report by the General Accountability Office faulted the program for not verifying claims made by manufacturers. The GAO got a bunch of phony products certified, including a gasoline-powered alarm clock.

The U.S. Department of Energy and the U.S. Environmental Protection Agency will end an automated approval process and no longer allow manufacturers to do their own testing for the Energy Star program. New applicants must submit test results from an approved, accredited lab, and already-qualified products must do the same by the end of the year.