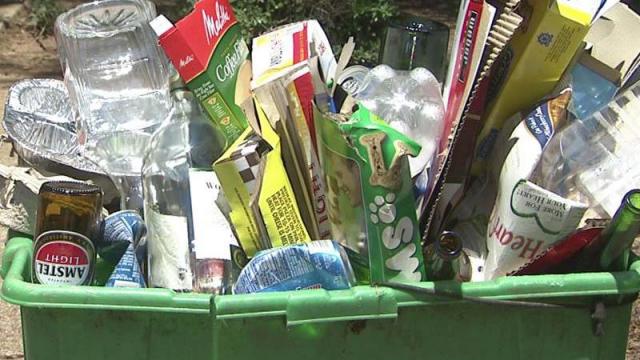 Raleigh, N.C. — Recycling is a way of life for Jim Jackson and his family. They think about everything they throw away.

The family even brings paper and cardboard to a Raleigh recycling center because their trash company, Shaw Sanitation, doesn't pick it up.

One can imagine their surprise when they realized even though Shaw picks up separated glass and plastic, it doesn’t stay separated.

“The collector picks up the bin and you’ll hear it (glass)…bottles and everything right in the back of the packer,” Jackson said. “Trash goes in next and it all goes in one place and that's the end of it.”

Jackson pays Shaw Sanitation an extra $48 a year for recycling, but he said it isn’t about the money.

“How many customers are collecting their recycling all week and hauling it out to the curbs, separating everything out, rinsing the bottles...and then to have the trash truck come and throw it in the trash,” Jackson said. “It’s pathetic.”

Three other Shaw customers complained to 5 on Your Side. In Wake Forest, a customer said collectors "dumped all the items in our recycling bin into the back of the garbage truck."

A Fuquay-Varina customer said their recycling was "thrown in the same truck as the...garbage." And in Raleigh a customer said, "I am paying for an extra service that does not exist."

WRAL showed video of the collectors mixing the trash and recycling items to Shaw's Vice President of Operations Harry Jeffreys. He said he was not surprised.

Although he wavered on how often it happens, Jeffreys says his company sometimes combines trash and recyclables on routes where recycling participation is low.

Jeffreys later faxed a 30 page list of the routes impacted. None of the complainants who contacted WRAL were on that list.

Either way, Jeffreys claims the recyclables are still recycled.

“The recycling is not taken to the landfill. It's taken to our site and it’s processed,” Jeffreys said.

Jeffreys said processing means someone sifts through and pulls out the regular trash. At the plant, he showed 5 on Your Side that someone opens the tailgate of the truck and picks out the recycable items.

“We see that we get even more because we find stuff that people are throwing away,” Jeffreys said.

“The fuel, the tires, the truck itself, the mechanical part…the hours…it’s just more efficient for us to pick through the trash,” Jeffreys said.

On Wednesday, Shaw President Nancy Shaw sent an e-mail to WRAL News stating it is not company policy to mix recycling with garbage.

“Currently we pick up one low-density trash and recycling route with the same truck. The recycling is to be put in the front of the packing units through the side door. This recycling is removed from the truck at Shaw’s facility prior to dumping the garbage. This has given the impression to some of our recycling customers and the public that our policy is to mix recycling with garbage. This is not our policy,” Shaw wrote.

Paul Crissman, section chief of the Solid Waste Management at the NC Division of Waste Management, said Wednesday businesses must have a special permit to separate garbage and recycling. Shaw Sanitation does not have that permit. Shaw said that is one more reason why her company won't do that anymore.

"I don't want to get anybody in trouble. I want them to do it the way it should be done,” Jackson said.

Across the state curbside recycling has continued to climb. Numbers show more than 1.25 million tons of items were recycled last year. Dare County led the way, with more than 993 pounds of recycling per resident.

Catawba County, in the Hickory area, came in second at 686 pounds per person. Pitt County was third with 560 pounds and Wake County trails with 123 pounds The state's lowest rate was in Northampton County with just under 8 pounds per person.
SUGGEST A CORRECTION