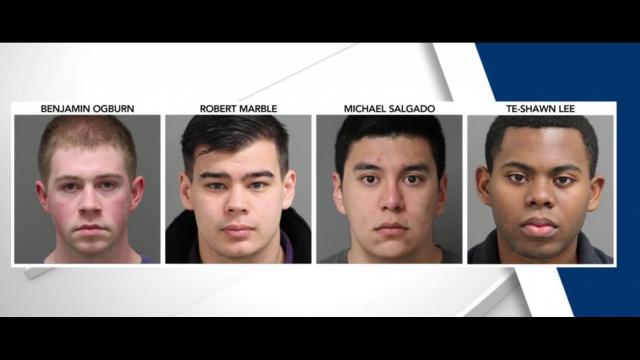 Raleigh, N.C. — Five students are facing charges in connection with the theft of pieces of what was formerly the floor of the basketball court at Reynolds Coliseum, according to an arrest warrant and police.

The basketball court at the North Carolina State University arena was remodeled in 2016, and pieces of the original floor were saved in a storage area for their historical value.

According to authorities, the suspects have all been charged with felony larceny, injury to personal property and wearing a mask on public property. They have been identified as:

According to his arrest warrant, on Dec. 7, Ogburn stole two pieces of the old floor, which are valued at $1,350, and caused more than $200 worth of damage while doing so.

The warrant also states that Ogburn used a mask to conceal his face as he left the arena, located at 2411 Dunn Ave.

In a statement, Ogburn's lawyer, Meredith Hubbard, a partner with Dysart Willis, said, "Mr. Ogburn is a student in good standing. ... We are working with the Wake County District Attorney's office to try and find an appropriate resolution. No evidence suggests that this act was malicious. The pieces of memorabilia were returned prior to charges being initiated."

According to a spokesperson for the university, both of the sections of the court were returned, but one section was damaged beyond repair.

The spokesperson confirmed Ogburn is a junior majoring in construction engineering. He started at N.C. State in fall 2016.

He was being held Monday at the Wake County jail under a $3,000 bond.

The court inside is named for Kay Yow, the all-time winningest coach in NC State women's basketball history who led the team to a 680-325 record. Yow coached the Wolfpack from 1975 to 2009 to 20 NCAA Tournament appearances, 11 Sweet Sixteens and the 1998 Final Four.