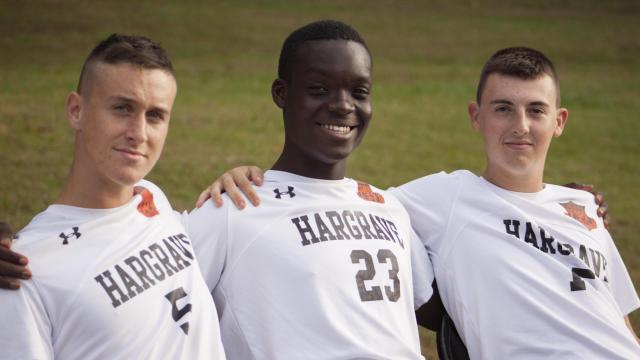 At a point in American history not all that long ago, single-sex schooling was the norm.

While this is no longer the usual state of things in public school classrooms or even most private schools for that matter, it does not mean the reasons these institutions practiced gender segregation are any less valid today then they were then.

Even at schools that are gender-integrated, boys and girls form social groups mostly made up of their own gender. Middle school dances and lunch tables show this clearly.

Cadets and school administrators at Hargrave report that an all-male environment involving shared experiences of the same physically and academically rigorous days builds strong bonds. These bonds often last a lifetime as graduates keep in contact for years afterwards.

"I chose Hargrave because it was different. I toured three other high schools, one of which was in my hometown, two were other boarding schools in Virginia. I had soccer opportunities from my local high school and one boarding school,l but I turned them down to come to Hargrave," said Chad Demarest, an 11th grade cadet at Hargrave Military Academy. "The community of cadets and their actions, no matter the situation, showed a family."

He added, "It astounded me the sheer act of brotherhood when someone fell behind in grades or got injured in a game. I wanted that sense of family and the feeling of having a whole team behind me to help me in any way they could."

Researchers into brain scans of boys and girls, like Leonard Sax and Michael Gurian, point out significant developmental differences that affect how they learn.

Boys have much less oxytocin and serotonin, causing more fidgeting. In addition, the scans reveal girls brains dedicate more of the cerebral cortex functioning towards attention and memory, while boys have increased brain activity around spatial and mechanical functioning. This makes boys more likely to thrive where movement and pictures are used rather than calm attention to detail.

Programs that enroll only a single gender can focus on tailoring their lessons to the learning styles of that gender.

At single-sex schools like boys' military academies, their cadets are middle and high school age. At this age, hormones are being released and are difficult for the child to control. Hargrave administrators and teachers notice the boys achieve a more sustained focus in this environment. More attention is then freed up that can be directed towards the task at hand.

Whether verbal or physical, one of the most common causes of aggression in young males is competition. According to developmental psychologists, like Dr. Michael Thompson, competition among males is a healthy and normal biological reality.

Competition over mates is one of nature's most common source of strife though, and can regularly lead to violence. Mating season is often the peak of male-on-male violence in the animal kingdom as this competition heats up. All boys schools are one way society has developed to prevent this source of competition boiling over into violence.

Freedom to be themselves

"When boys are freed from noticing and attempting to impress girls, something surprising happens," Tung said. "The boys become more adventurous and curious about their individual interests."

A carefree social dynamic emerges where boys pursue things they may have been self-conscious about investigating. Art, music, wood carving, choir or any number of other activities open up as possibilities.