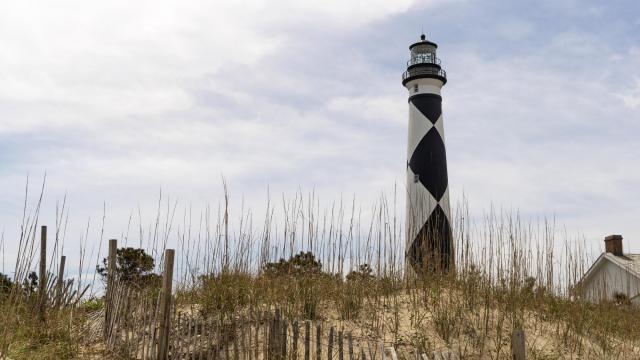 For the Crystal Coast, the glistening shoreline will always be its main attraction. However, the region also boasts a long list of must-see places that are just as enticing as its popular beaches. Whether you're looking to explore nature's beauty up close, or if you want to learn more about the local wildlife or the state's coastal history — you'll find it here.

The following must-see attractions appeal to locals and visitors alike, and can only be found at the Crystal Coast.

Fort Macon State Park is located on Bogue Banks near Atlantic Beach and opened in 1936. The North Carolina state park "has multiple personalities as the site of a perfectly restored Civil War-era fort, a museum-quality coastal education center and an unspoiled shoreline for swimming, surf fishing and beachcombing."

The park is almost fully surrounded by water and is both a nature-lover's and history-buff's dream.

Undisturbed natural beauty provides the perfect backdrop to explore salt marshes, dune fields and estuaries. Cannon and musket demonstrations are routine, and there are special events held throughout the year.

Whether you want to bird watch, hike or explore early defenses that protected locals from pirates and enemy invaders, Fort Macon State Park has all of this and more.

Cape Lookout National Seashore is a National Park Service treasure that is protected from development and is well-known for its wildlife, surf fishing and wide beaches.

Home to the Cape Lookout Lighthouse and lots of natural beauty, it's also where the historic village of Portsmouth is located. One of the oldest villages in North Carolina, Portsmouth was established in 1753, and visitors can see the remnants of this once thriving port town. Many Carteret County families can trace their lineage to Portsmouth, which was once a principal point of entry into North Carolina.

Additionally, Cape Lookout National Seashore offers opportunities for camping, bird watching and exploration in an undeveloped area that has maintained its natural allure.

"Cape Lookout is one of the only barrier islands that is relatively untouched by man. There's no permanent development out here. The beach, sun and sand — it's an absolutely beautiful place," said Jeff West, superintendent of the Cape Lookout National Seashore. "Shackleford Banks, which is the southernmost barrier island in Cape Lookout National Seashore, is about 8.25 miles long and is home to around 110 wild ponies that have roamed the island for over 400 years."

The Shackleford horses are one of Cape Lookout's main draws. The ponies are beloved due to their centuries of inhabitation and are truly majestic. Genetic research shows Spanish ancestry in the Shackleford herd, and local lore says the horses' ancestors swam ashore from a sinking Spanish ship.

"We'll get hit by a storm and people will call and ask me how the horses are," West laughed, saying that Cape Lookout is truly a place like no other. "You can be out on the beach and not run into anyone. It's not very often that you can have that kind of experience on the Atlantic seashore."

The North Carolina Aquarium at Pine Knoll Shores originally opened in 1976 and is an interactive aquarium that features a submarine tank, touch pools and local sea creatures. You can see a rare white sea turtle, touch a stingray, watch otters play, look a shark in the eye and "explore shipwrecks without getting wet," as the website states.

Its mission is to inspire appreciation and conservation of the state's aquatic environments.

"The aquarium is a remarkable resource for the people of North Carolina and other visitors to learn about our natural world and experience things that they might not be able to see on their own. For example, our large habitat tank features sharks and fish that you wouldn't see if you're just relaxing on the beach," said Liz Baird, the director of the N.C. Aquarium at Pine Knoll Shores.

Baird moved to Carteret County in October 2019 after serving as the director of education for the N.C. Museum of Natural Sciences for 24 years. Committed to fostering connections between people and nature, Baird was excited to transition to her new role at the aquarium after a long career in Raleigh.

Baird grew up in the Washington, D.C., area, but she spent her summers at the Crystal Coast and fell in love with the area. She has fond memories of building sand castles and eating seafood. In a way, she feels like she is returning home, and she wants people to know how much the region has to offer.

"The aquarium tells the story of North Carolina from the mountains to the sea. You can learn about some of our freshwater species and understand how we're all connected," she said. "I take the long route to my office every morning so I can walk by our three river otters playing. Watching them frolic in their habitat and play in the water just starts my mornings off terrifically."

Most of the animals come to the aquarium as rescues. The aquarium is home to two bald eagles and several other species. Additionally, it's adjacent to the Theodore Roosevelt Natural Area and features a nature trail that people can explore on their own.

Kayaking, paddleboarding, bird programs and other special events are available throughout the year.

Added Baird, "I know that my passion for the outdoors and the natural world started here."

The Beaufort N.C. Maritime Museum offers an exciting look at the region's coastal landmarks and historical figures — like the infamous pirate Blackbeard who settled in Beaufort before he was later killed in nearby Ocracoke. Blackbeard scuttled his flagship Queen Anne's Revenge at the mouth of Beaufort Inlet near Fort Macon.

According to the N.C. Maritime Museums website, "The North Carolina Maritime Museum in Beaufort reflects coastal life and interprets lighthouses and lifesaving stations, the seafood industry, motorboats and more. Studies in marine life, science and ecology are available for all ages. The Beaufort museum is the repository for artifacts from Blackbeard's wrecked flagship, Queen Anne's Revenge, among them cannons, grenades, belt buckles and beads. The Harvey W. Smith Watercraft Center teaches boatbuilding for all ages."

The museums are open year round and offer free admission, though donations are appreciated.

The Core Sound Waterfowl Museum and Heritage Center is "a gathering place for the heritage and traditions of Core Sound — a place to experience the people, place and community."

The facility, which is located in Harkers Island, was created to enhance the community and region at-large by creating a place that brings together historical, cultural, artistic, environmental and educational elements that preserve the waterfowl heritage of eastern North Carolina.

The museum celebrated its 25th anniversary in 2017 and features a gallery of Core Sound Decoys, a gathering room designed in the style of hunt clubs that once lined the Outer Banks, a library with an expansive book collection on regional waterfowl and more, and a research room.

The museum offers events throughout the year, STEM education and kids programming, and other activities, and is the perfect place to visit if you are a wildlife or coastal history enthusiast.

The museum has been closed since September 2018 due to damage from Hurricane Florence. Its original reopening date has been rescheduled to Memorial Day Weekend, May 22, due to COVID-19.