5 cars parents of teens should consider for their new drivers

The leading cause of death for 14- to 18-year-olds is motor vehicle accidents. In fact, according to the National Highway Traffic Safety Administration, nearly 50 percent of all teenagers who are involved in an accident die.

When choosing a vehicle for their teenaged driver, parents often consider these statistics.

They may not know which vehicles are the safest for their teen drivers, however. An Insurance Institute for Highway Safety study showed that despite being the most at risk, teenagers are actually the most likely subset of drivers to have unsafe transportation.

"We're just starting to research cars for my step-daughter," said Alli Morgan with LeithCars.com. "We want to make sure she's safe on the Triangle's roads, has a car that gets good gas mileage, and that she can afford at her part-time job, too."

What types of Vehicles Should Parents Look For?

Larger automobiles are generally safer from a physics standpoint, but if it is older, it will likely be lacking in two specific safety features that are required for any vehicle for a teen: side curtain airbags and Electronic Stability Control.

ESC, which has been required on all new vehicles since 2012, has been proven in single-vehicle crashes to reduce fatalities almost in half. So, bigger is not necessarily always better for safety.

When considering size, it is recommended parents stay away from anything that is too big or too small. The inexperience of a young driver makes controlling a large vehicle more difficult; and larger pick-ups, SUVs and minivans not only do not provide decent gas mileage, but they allow for more occupants, creating a distracting environment for the driver.

Very small vehicles, sports cars and anything with significant horsepower can cause teens to drive more recklessly, on the other hand. The cost of insurance is also immediately higher, making overall costs more difficult. 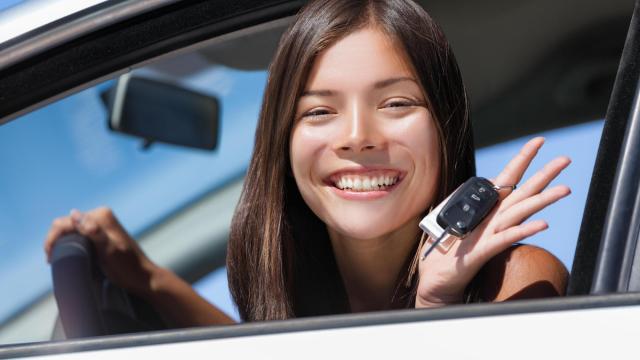 Which Specific Makes and Models Meet the Grade?

Those shopping for teen drivers should keep potential vehicle lists limited to those with a top rating of "Good" from IIHS, and 4 to 5 stars from NHTSA.

Using these qualifications, here are the five best cars for teen drivers.

It makes sense to start with the gold standard.

This vehicle tops the list for many reasons: it has standard ESC since 2008, perfect IIHS and NHTSA scores for safety in 2013 and every year since, gets great gas mileage, is affordable, stylish, not too sporty, not too large, not too small, known for reliability and low maintenance costs, and can last many years even with high mileage.

When "Consumer Reports" compiled reliability ratings data on more than 500,000 vehicles, the Prius came out on top.

It may be a bit smaller than mid-sized, but the Prius has top safety ratings since 2010, is affordable in its older models, and as a hybrid, it is environmentally friendly.

As a plus for the parents, it is not a high-horsepower ride.

The 2013 Fusion is available in AWD, and has standard advanced technology and safety features. As a result, the 2013 Fusion is a top safety pick for both IIHS and NHTSA, getting high marks for its front and rear head curtain airbags, front torso airbags, and driver and front passenger knee airbags, among other safety measures.

The Fusion is typically equipped with Bluetooth technology so your teen can safely stay connected.

This car looks great on the road, and gets up to 37 mpg on the highway, which will be great on your teenager's wallet, too.

"There are so many choices out there, it's great to learn about Electronic Stability Control, which I didn't realize wasn't standard before 2012, and I've been pleasantly surprised by the safety options some of these vehicles offer," Morgan said. "Technology sure has come a long way since the '90s when I got my first car."

The five-passenger CR-V has been known for its reliability, long-lasting mileage, perfect safety scores, low cost of ownership and large cargo space.

And since 2007, it has come standard with ESC and roll-sensitive curtain airbags.

The 2016 Sorento is another top safety pick from IIHS.

It has optional front crash prevention technology with its Forward Collision Warning System, a real plus for parent's peace of mind. Side airbags, rollover sensor and Electronic Stability Control are standard, as with the other models listed here.

It's smaller in that it's a crossover, instead of a full SUV, yet still has enough space for your teen's sports equipment or band instruments.

Gas mileage-wise, the 2016 Sorento isn't the highest on the list, but holds its own with up to 21 city and 29 highway.