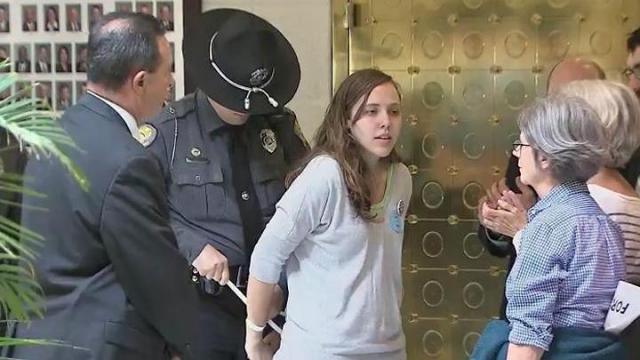 Raleigh, N.C. — More than four dozen people were arrested Monday evening in a protest by the North Carolina chapter of the NAACP – its third consecutive week of protests and arrests – outside the Senate chambers of the North Carolina General Assembly.

In what state NAACP President Rev. William Barber II is calling "Moral Mondays," an estimated 175 people showed up to speak out against what the civil rights group and other activists say is a Republican-backed regressive agenda on social programs, voting rights, education and tax policy – actions that disproportionately hurt the poor and minorities.

Protestors held up signs saying "Worker's rights are union rights" and led booming call-and-response chants of "This is what Democracy looks like!" and "fight, fight, fight!"

A crowd of several hundred people waited outside the Legislature building and cheered as a prison bus carried away the protesters Monday evening.

Thirty people were arrested last Monday, a week after 17 protesters were taken into custody.

Laurel Ashton, a recent graduate, said after being released from custody that the protests are a way to change politics both in the state and around the world.

"Is it worth the risk of being arrested or losing your job? For me, entirely," Ashton said. "The struggle is not only about the arrest, that is one part of a much larger plan that has a legal side and many other elements. The arrests are really important in drawing the nation's eye to North Carolina and what is going on here."

Republican leaders have dismissed the protests as the voice of a fringe group angry over the Republican takeover of the General Assembly. The Republicans won the state legislature in 2010, the first time in more than a century.

The National Association for the Advancement of Colored People and other activists won't say how long protests will continue, but protesters Monday night said they plan to be back next week.

Barber says they're a part of a wider strategy that includes legal action and political organizing.

"The leadership of the North Carolina General Assembly and the governor ran on a platform of jobs and economic growth but are now governing directly against those goals," Barber said in a statement Monday. "Rich right-wing entities and people fund and feed the ultra-conservative social issues agenda on one hand while they use a bait-and-switch maneuver to pass economic and tax policies that will transfer more wealth to them and hurt the same poor and working-class people they need to get elected. This must be exposed as not only morally indefensible but constitutionally inconsistent and economically insane."